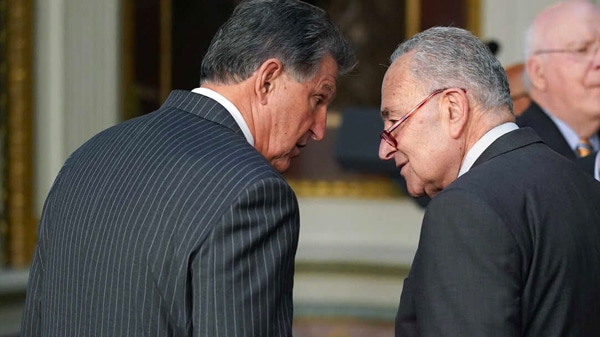 Just when you think the Democrats can’t get more destructive, dishonest, or stupid, they prove you wrong.

In a stunning move that proves they have learned nothing from the current economic mess (which their policies made), Sens. Joe Manchin and Chuck Schumer announced they have reached an agreement on a tax hike and spending increase bill. It is one of those magic moments that reminds you Big Government Socialists simply can’t learn from reality.

At the same time government reports indicate the United States is officially in a recession, the Democrats want to raise taxes – which will kill jobs, create more shortages, and make the recession even worse.

Americans for Tax Reform have highlighted a few examples illustrating how destructive this bill will be.

For starters, it includes an estimated $8 billion tax on natural gas by taxing energy producers for methane emissions in the mining process. Fuel and energy prices are already high, and Democrats want to make them higher. The American Gas Association estimated that this tax alone would raise the average family’s natural gas bill by 17 percent.

The bill also would put in place a 15 percent corporate minimum tax (or book tax). This can – and should – legitimately be categorized as an American manufacturing tax. It is a backhanded way for Democrats to undermine and claw back (but not technically vote against) previous passed popular, pro-growth, and pro-job tax deductions meant to spur American manufacturing and the economy.

As Americans for Tax Reform wrote:

“While Democrats claim they are only targeting large, profitable corporations, the cost of these tax increases will be borne by working families in the form of higher prices, fewer jobs, and lower wages. A Tax Foundation report from last December found a 15 percent book tax would reduce GDP by 0.1 percent and kill 27,000 jobs.”

Another result of this bill will be a dramatic reduction in new life saving medicine.

The Congressional Budget Office warned in its preliminary analysis that drug manufacturers could see up to $1 trillion in revenue losses over the next 10 years thanks to a provision in the Manchin-Schumer bill. Further, CBO estimates that 15 fewer drugs could be developed over the next 30 years. While the CBO didn’t specify what kind of drugs would be reduced, the production of specialized drugs that don’t have generic competition – read: cancer drugs – will most likely take the greatest hit.

And – to make sure the government gets all the taxes the Democrats are increasing – the bill will bolster the ranks of the Internal Revenue Service. As Grace Marie Turner reported:

“Chris Jacob of Juniper Research explains, the draft bill contains an $80 billion ‘investment’ in the Internal Revenue Service. The Biden Treasury Department earlier released its’ tax compliance agenda,’ Jacobs writes, ‘showing where it would like to spend that money.’”

“And on page 17 of that document, it helpfully included a chart demonstrating the IRS agents it would hire with that additional cash. All told, the Biden Administration wants to hire 86,852 agents, expressed in [the] chart as ‘FTEs,’ or full-time equivalent employees.”

So, Schumer and Manchin are going to help the economy by hiring more bureaucrats to get more of your money.

Big Government Socialists know they can’t be honest about what they are doing. Schumer and Manchin (who is usually fairly sane) can’t introduce the “Tax Hike and Job Killing Bill.” They also can’t introduce the “Bigger Spending and More Inflation Bill.” So, they simply lie and call it something positive. They are calling it the “Inflation Reduction Act.”

No serious person believes that a combination of tax and spending increases will reduce inflation. However, the Left believes it can use any kind of Orwellian propaganda and get people to believe it (mainly because the news media help carry their lies).

Remember, President Joe Biden told us the disaster in withdrawing from Afghanistan was a great success. He said the southern border is under control. He said inflation is “transitory.” He said a recession is “highly unlikely.” According to him, he is happy with the current economy.

The Washington Democrats apparently think they can say anything, and Americans are dumb enough to believe them.

There is an obligation for Senate Republicans to use every parliamentary device to stop this disastrous bill. As Mark Halperin wrote, “Did Schumer and Manchin time the announcement of the deal until after the passage of the Chips and Science legislation in the Senate – and, if so, did they purposefully just roll Washington’s ostensibly Unrollable Man, Mitch McConnell – and, if so, what is McConnell going to do about it?”