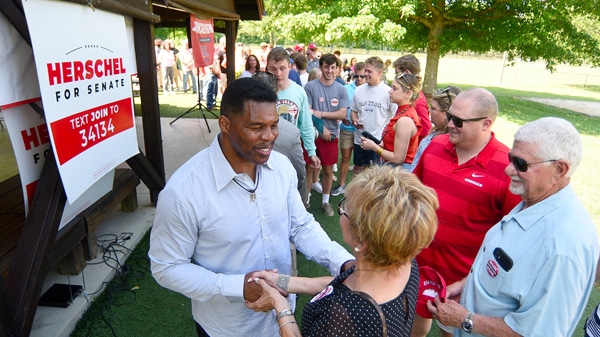 November’s election realities will be much friendlier to Republicans than the August news media fantasies.

We are once again in the silly season. The elite propaganda media and its Democrat allies are convincing themselves that a dramatic turn is coming.

If you read the current breathless analysis and coverage: the Republicans have nominated weak, inadequate candidates for the Senate; recently-passed laws give Joe Biden and the Democrats “real momentum;” and the massive Democrat Party advantage in fundraising will give their candidates huge advantages in defining the election.

We have been here before.

In August 1980, Reagan was reportedly underperforming. He went on to win the biggest electoral college victory against an incumbent president in American history.

In August 1994, no one thought the House Republicans could win a majority. In fact, even the weekend before the election, the professional analysts and political expert newscasters opined that a Republican majority was fantasy. The following January we convened the first Republican House Majority in 40 years.

In August 2016, the elites were certain that a Donald Trump victory was impossible – and that Hillary Clinton was inevitably going to be the next President of the United States. If you doubt how deeply the elite media believed in a Clinton victory, go to YouTube and watch election night 2016 coverage. Heartbroken commentator after heartbroken commentator realized, with tragic looks on their faces, that Trump had won.

Finally, in 2020, House Republicans were supposed to lose 25 seats, according to the experts. Instead, they gained 15 seats. This 40-seat swing put Kevin McCarthy in reach of the speakership.

As you hear the Democrat surge cheerleading, consider that the Joan of Arc of Trump Haters got only 29 percent of the vote in Wyoming this week. Instead of wondering why Wyoming voters didn’t believe the made-for-TV Jan. 6 Committee hearings, the media is wondering why the voters failed to do “the right thing.” Almost no pundits have looked inward and internalized that a 29 percent vote for an incumbent is not simply a loss – it is a repudiation.

So, now we have a series of slanted polls which indicate the Democrats are gaining ground. This is nothing new. In 1990, the liberal Detroit paper published a poll the Saturday before the election showing Republican John Engler would lose by 19 percent. Three days later, he defeated the Democrat incumbent.

In my own case, I have never forgotten a newspaper headline in late October 1994, which read “Democrats gaining ground.” Being acutely interested at the time, I read the article carefully. The truth was the Democrats were gaining ground among those least likely to vote, and the Republicans were widening their lead among likely voters. Guess which one mattered more.

Finally, we are told that Republicans made a mistake in nominating outsiders who never ran for office before. I lived through that in 1980, when we had a lot of newcomers running for the U.S. Senate. The papers said we would lose big. But the American people said they wanted new blood in Washington and candidates who wanted to work with Ronald Reagan. Republicans made a 12-seat gain and created the first Republican U.S. Senate majority since 1954.

Republican candidates today just need to focus on big issues – and not let their opponents or the news media drag them into irrelevant arguments.

Remember: Liz Cheney failed because she didn’t represent the people of Wyoming.

When Sen. Mark Kelly votes for 87,000 new IRS agents – and zero new border patrol agents – he is representing Washington D.C., not Arizona. With some 400,000 people illegally entering the United States last month, Blake Masters should have an easy time arguing that Arizona’s Senator should vote for more border agents to police illegal immigration – not more IRS agents to police Americans.

When John Fetterman comes out against oil and gas, he isn’t representing Western Pennsylvania (the fourth largest energy producer in the United States). When he advocates releasing one-third of the state’s prisoners in the middle of a crime wave, he abandons and threatens the lives and property of every Pennsylvanian. He can play silly games about Mehmet Oz all he wants. But in the end, Oz isn’t trying to kill your job or calling to release killers.

When Sen. Raphael Warnock votes for trillions of dollars in spending in the middle of painful inflation, he shrinks the wallets and pocketbooks of every Georgian. Herschel Walker has an easy case to make: “We can’t afford Warnock and Biden,” will resonate with most Georgians.

When virtually every policy position Maggie Hassan supports is deeply unpopular, she is vulnerable – even if Republicans don’t complete their primary until Sept. 13.

When Tim Ryan has consistently voted for Nancy Pelosi’s Big Government Socialist agenda – including those 87,000 new IRS agents – he is going to find increasingly conservative Ohioans unlikely to pick him over J.D. Vance.

When Catherine Cortez Masto is forced to explain the economic pain of high gas and diesel prices, high food prices, and policies which have crippled the Las Vegas economy, she will find Nevadans unsympathetic. Former Nevada Atty. Gen. Adam Laxalt may be the best prepared Republican senatorial candidate in the country. Nevada is a state looking for new leadership at every level, and it is easy for Laxalt to prove Masto represents the old, failed, and out-of-touch system.

November realities are going to be a lot friendlier to Republicans than August news media fantasies.