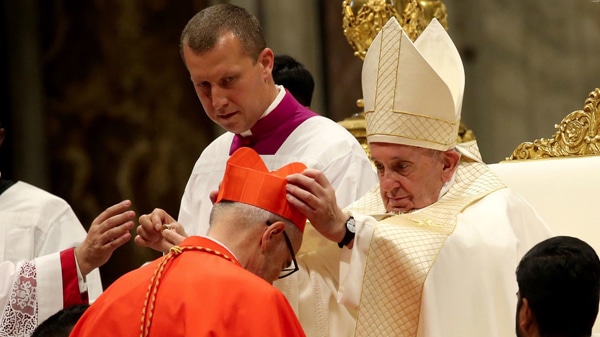 As most Italians are enjoying the last days of summer, Pope Francis has called the College of Cardinals to the Vatican.  From August 27-30, the Holy Father will preside over three consistories and a pastoral visit.

On August 27, Pope Francis will convene two consistories, on August 28, he will make a pastoral visit to L’Aquila, and on August 29 and 30, he will preside over a third consistory.

A consistory is a formal meeting of the College of Cardinals which is both called for and conducted by the pope. There are two kinds of consistories – ordinary and extraordinary.

An ordinary consistory includes members of the College of Cardinals, can be open to the public, and is convened to formalize a papal decision or discuss routine matters.

An extraordinary, or private consistory, includes the entire College of Cardinals and is convened when serious affairs or particular needs arise.

On Saturday, August 27, Pope Francis will hold two public ordinary consistories, the first for the creation of 20 cardinals and the second to approve the canonizations of Blessed Giovanni Battista Scalabrini and Blessed Artemide Zatti.

This will be Pope Francis’s eighth consistory for the creation of cardinals, at which time, 20 new cardinals, representing 14 nationalities, will receive the scarlet biretta. Bishop Robert McElroy of San Diego will be among those elevated to the rank of cardinal by the Holy Father.

Cardinals play an important role in the Vatican, serving as papal advisors and, if under the age of 80, as electors in a future conclave.

On August 27, there will be 226 members of the College of Cardinals, 132 of whom are electors. Three of the new cardinals currently hold positions within the Roman Curia, while others come from Europe, Asia, Africa, and the Americas.

Pope Francis has worked to grow the universal church by engaging Catholics around the globe throughout his pontificate. As Vatican News reported, “Once again, the Pope has chosen to associate the College of Cardinals with bishops from all over the world, preferring the peripheries.”

For example, Archbishop Virgilio do Carmo da Silva of Dili will become Timor-Leste’s first cardinal. Remarking on the significance of the nomination, he told Vatican News, “[It’s] not for me, but for the people of God here in Timor-Leste. It is a concrete occasion affirming the identity of this small country in Southeast Asia with 96% Catholics.”

Additionally, Archbishop Anthony Poola of Hyderabad, India will be the first “Dalit” cardinal in history. Dalits, often called “untouchables,” have been subject to exploitation and are viewed as outcasts in the caste system. Poola said he believes that through his pontificate, the Holy Father has sent a message of “love, compassion and reaching out to the periphery, the poorest of the poor.”

Pope Francis has also named Archbishop William Goh as Singapore’s first cardinal. Although the Catholic Church in Asia is “considered quite new,” according to Goh, the faith is “very alive.” In an interview with Vatican News, Goh remarked, “If the Church is ready to be universal, I think it must be more proportionately represented by the different continents and countries, so that the Church can be truly called the Catholic Church.”

Pope Francis’s selection of cardinals reveals the pontiff’s vision for the future of the church as each of these new cardinals will bring unique contributions, expertise, and perspectives to the Vatican.

On August 29 and 30, Pope Francis will convene an extraordinary consistory (the third of his pontificate), at which time the Holy Father and the entire College of Cardinals will privately discuss the Roman Curia’s new constitution, Praedicate Evangelium (“Preach the Gospel”).

The new Apostolic Constitution includes reforms in the organization and structure of the Roman Curia, more opportunities for greater involvement of baptized lay Catholics in the Church’s governing body, and places emphasis on the importance of evangelization.

These historic consistories, led by Pope Francis, will guide the direction of the Catholic Church and have an impact for generations to come.