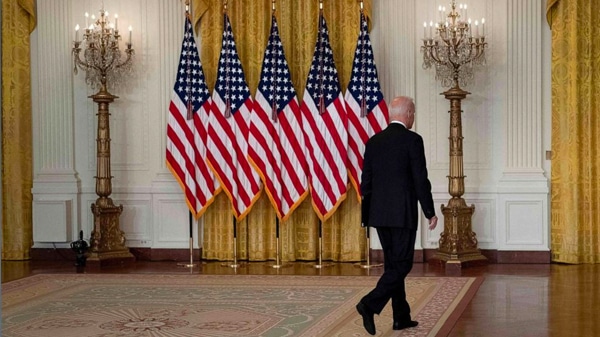 If Democrats are held accountable for the Biden disaster – as they should be – they will lose by enormous margins.

Recently I have held two podcast conversations on Newt’s World about the first anniversary of President Biden’s abandonment of Afghanistan.

For the first podcast, I spoke with a U.S. Marine and his Afghan interpreter who was stranded in Afghanistan. During the second episode, I learned about an amazing team effort to help our Afghan allies survive the Taliban and flee the dictatorship.

After those two remarkable conversations about the Biden administration’s betrayal of our veterans and our allies, I was so angry I had to spend a few days calming down before writing this column.

I was reminded that some of my disgust with Joe Biden was captured in the Aug. 31, 2021, New York Post front page photo of Biden looking at his watch as 13 young American soldiers were being returned in caskets from his failed strategy of surrendering to the Taliban. The headline read “DISHONOR,” and the subhead was “Biden looks at watch as caskets come home.”

Compounding the incompetence and ineffectiveness of the withdrawal from Afghanistan was the Biden administration’s complete dishonesty about what had happened.

Remember that President Biden referred to “The extraordinary success of this mission” after the world had watched the chaos at the Kabul airport, the wounding of 20 American servicemen and -women, the killing of 13 American soldiers, and the horrifying sight of Afghans falling from an American military plane because they could not get inside – and they were terrified of being left to the Taliban.

Secretary of State Antony Blinken previously set up President Biden’s dishonesty, on Aug. 25, 2021, when he said there was “no deadline” for evacuating the Afghans who risked their lives helping American soldiers for the last 20 years.

The pathetic self-deceiving failure of diplomacy without the effective threat of force was revealed when Blinken said:

“The Taliban have made public and private commitments to provide and permit safe passage for Americans, for third-country nationals, and Afghans at risk going forward past Aug. 31. The United States, our allies and partners, and more than half of the world’s countries – 114 in all – issued a statement making it clear to the Taliban that they have a responsibility to hold to that commitment and provide safe passage for anyone who wishes to leave the country – not just for the duration of our evacuation and relocation mission, but for every day thereafter.”

Of course, we now know that the Taliban immediately broke its word and to this day is hunting down Afghans who worked with Americans. Meanwhile the 114 signatories have done nothing to stop them.

But Secretary Blinken was not the only Biden administration official deluding himself.

You would have thought the Central Command Commander – after years of fighting the Taliban – would have known better. But here was Gen. Kenneth McKenzie’s delusional report:

“The Taliban had been very – very pragmatic and very business-like as we have approached this withdrawal.”

How could he have said that in the middle of the chaos across Afghanistan, the disaster at the Kabul airport, and the open Taliban hunt for pro-American Afghans?

These are the kinds of things into which Congress should be digging. Taliban pragmatism is the pragmatism of terrorism. The Taliban’s business-like approach includes taking over billions of dollars of American military equipment.

On a more domestic front, the disaster of the Afghan collapse has deeply impacted our veterans. One poll for the Veterans and Citizens Institute indicated:

“73% of veterans felt betrayed, 67% felt humiliated, 76% felt angry, and 81% felt disappointed about the withdrawal of the American military from Afghanistan… 70% of veterans agreed with the statement ‘America did not leave Afghanistan with honor.’”

As Ryan Mills of National Review reported, 96 percent of the 81,000 Afghan allies with Special Immigrant Visas who were in Afghanistan during the surrender are still there. That’s 78,000 allies we have left behind. Meanwhile, State Department figures indicate it will take 18 years to process all the potentially eligible SIV allies left behind at the current rate. There are 35,000 additional Afghans who helped U.S. Forces but can’t get SIVs. All these allies are being hunted by the Taliban.

So, Biden has allowed between 2 million and 3 million anonymous immigrants to illegally cross our southern border but remains indifferent to tens of thousands of people who risked their lives working with American troops. Sadly, under this administration and Congress, our allies in Afghanistan are more likely to be killed by the Taliban than rescued by Biden.

This is an anniversary of shame and humiliation. It is a legacy President Biden will never live down.