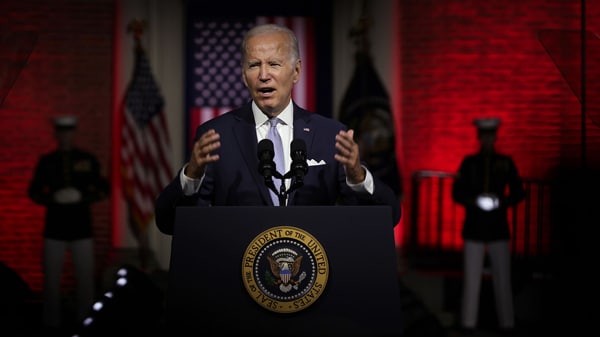 After Joe Biden’s hateful and divisive speech, Republicans need to unify the country by thinking through and solving America’s problems.

President Joe Biden’s Philadelphia speech created an enormous opportunity for Republicans – if they can be agile, creative, and disciplined enough to take advantage of his enormous mistake.

Callista and I watched the speech on CNN (neither Fox nor the other networks we checked carried it). After a few minutes, she turned in disgust and said, “this is not a presidential speech, this is just a political speech.”

David Harsanyi was even tougher. He called it “basically a smear of 70 million people in front of the flag and military on primetime TV.”

Biden chose the historic site of the Declaration of Independence and the U.S. Constitution to make a bitterly partisan, divisive speech. He blasphemed the temple of liberty and law with his dishonesty and viciousness.

There is a grand irony to Biden choosing Philadelphia for his tone-deaf partisanship. Last weekend alone, 14 people were shot and four killed in Philadelphia. More than 1,400 people have been shot in Philadelphia this year, and the city will likely break its 2021 all-time high of 560 homicides. Armed robberies are up more than 60 percent. Retail theft is up more than 50 percent. There have been more than 750 carjackings this year in the City of Brotherly Love – more than triple the average from 2010 to 2019. While Biden engaged in shallow partisanship, more than 70 percent of Philadelphia’s citizens say crime, drugs, and public safety are the city’s biggest problems.

Speaking in a crime ridden Democrat-run city with a George Soros-funded prosecutor who refuses to protect the innocent – and with U.S. Senate candidate John Fetterman, who voted by himself 25 times to release murderers as a member of the parole board – Biden had nothing to say about protecting Philadelphians.

Biden had nothing to say about stopping the inflation which is hurting American families – and especially the poor and retirees.

Biden had nothing to say about solving the energy crisis for Americans or European allies who are about to be devastated by Vladimir Putin’s cutoff of Russian natural gas.

Biden had nothing to say about the disaster on the southern border, which has allowed an estimated 3 million illegal immigrants to enter America without vetting for health issues or criminal records. It has also opened America up to a flood of illegal drugs and criminal cartel influence.

Biden had nothing to say about the disastrous educational results in which the teachers’ unions pressured the Democrats to keep children out of school and robbed young Americans of years of learning.

Hating Donald Trump and hating his 75 million supporters is a thin platform for Biden to offer America at a time when Americans are tired of being divided.

Through America’s New Majority Project we have learned that 87 percent of all Americans want to restore the America that works. An even larger 91 percent of Americans agree with Rev. Martin Luther King Jr.’s admonition that it is the content of our character, not the color of our skin, that matters.

Furthermore, 84 percent of voters believe that parents should be able to see all curriculum plans and materials for classes in which their children are enrolled. This would mean that parents would have access to teacher lesson plans, book excerpts, and videos shown in class.

On elections, the American people reject the Democrats’ desire to loosen the rules. Eighty-five percent support requiring all voters to show photo ID before casting a ballot.

In overwhelming opposition to the Biden giveaway programs 74 percent of all Americans support requiring able-bodied adults to work for taxpayer funded benefits, such as food stamps, health care, or welfare. Only 16 percent oppose (apparently including every elected federal Democrat).

Similarly, in repudiation of Biden boasting about his big spending bills, by 67 percent to 19 percent, Americans believe limiting federal spending and balancing the budget will reduce inflation. Interestingly, 74 percent of Hispanic Americans support this policy.

There is a large majority of Americans who are for a number of practical solutions which would restore the America that works.

Biden has nothing but condescension, divisive strategy, and failure to achieve any of the major goals of the American people. The Republicans have an opportunity to become the commonsense solutions party that reaches far beyond the Republican base to attract independents and disappointed Democrats. A positive, problem-solving approach will greatly increase the Republican appeal to Hispanic Americans, African Americans, Asian Americans and Native Americans.

Biden has set the stage for GOP Leader Kevin McCarthy’s Commitment to America and the nationwide emergence of positive, problem-solving Republican candidates in the U.S. House and U.S. Senate.

The next few weeks are a huge opportunity for Republicans to draw a vivid contrast between the Biden politics of hate and division and a unifying Republican effort to think through and solve America’s problems.