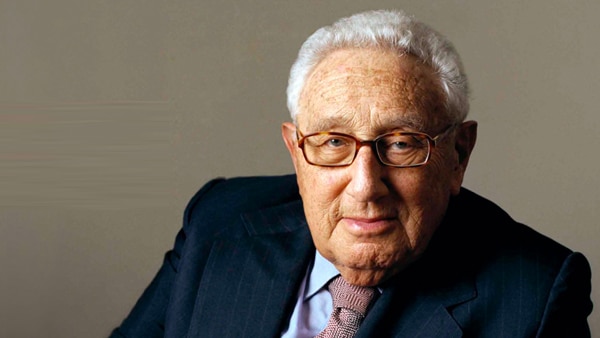 Dr. Henry Kissinger’s “Leadership: Six Studies in World Strategy” is a book that every citizen can learn from and that every leader should study again and again.

Every once in a while, a book comes along that has so much knowledge and wisdom that every American should read it and every potential leader should study it thoroughly.

Dr. Henry Kissinger’s “Leadership: Six Studies in World Strategy” is that kind of remarkable book. Using insights, stories, and lessons from decades in public service, Kissinger brings important truths to light that citizens can apply to their own projects and that political leaders can use as guidance in decision-making.

Kissinger is an amazing national asset whom I have had the honor to know for many years. At 99 years of age, he brings to bear a lifetime of knowledge and experience in thinking about the challenges we face as a country and as a free people.

In Leadership, Kissinger draws upon his own experiences with world leaders to describe significant past events that, in turn, reveal important lessons for the future.

What makes Kissinger’s stories and insights so remarkable is the fact that he actually lived them and personally interacted with the leader being described and analyzed.

The first leader discussed by Kissinger is Konrad Adenauer, the German chancellor who had a “strategy of humility.” Adenauer had been an anti-Hitler local official who spent part of the Nazi years in a monastery while at risk of being killed for refusing to endorse Hitler and the Nazi regime.

After World War II, Adenauer led a deeply defeated and shattered West Germany back into the circle of nations. He knew West Germany would only survive as part of NATO and that the fragile nation had to be close to the United States for protection against the Soviet Union.

However, Adenauer understood that after three wars between Germany and France (beginning in 1870 with the Franco-Prussian War, followed by World War I, and World War II) it was essential to find a common path forward. This initiative to create friendship where war had existed was so important and so successful that Adenauer became the only foreign leader ever invited by French President Charles de Gaulle to his personal home for the weekend.

Almost the opposite of Adenauer’s strategy of humility was President de Gaulle’s “strategy of will.” Kissinger recounts de Gaulle’s rise from an obscure military position to his personification of the Free French resistance after the Nazi occupation of France.

Labeled a traitor by the Vichy French government, and with no real strength except his own determined personality, de Gaulle forged first a movement and then a government. Rejected by traditional politicians after World War II, de Gaulle resigned from the French presidency rather than lower himself to play the games that had so weakened France in the recent past.

Once the French political system collapsed, de Gaulle was brought back to again save his country. He was so wise and intentional in creating the Fifth Republic, that today, it is the longest surviving French system of government since the end of the monarchy.

In stark contrast to de Gaulle’s inflexibility and focus on stubbornness, President Richard Nixon had a “strategy of equilibrium.” Nixon pursued this strategy consistently with his national security adviser (who later added the title of secretary of state to his portfolio), Henry Kissinger.

This is a profoundly fascinating part of the book for anyone interested in how a brilliant team can manage national security and foreign policy on a worldwide basis because you are reading about history from the man who helped make it. The contrast between the Nixon era with the current level of incompetence is staggering and humbling. The section on America’s opening-up to Communist China would be worth the whole book, but the section on maneuvering in the Middle East was equally fascinating.

As part of his Middle Eastern experience, Kissinger developed a great admiration for President Anwar Sadat of Egypt, whom he characterizes as having a “strategy of transcendence.” Kissinger describes Sadat as one of those rare leaders with a positive vision for a different future and then works doggedly to make it a reality, despite all the obstacles.

Kissinger then describes Prime Minister Lee Kuan Yew’s commitment to the “strategy of excellence” that transformed Singapore into a modern, wealthy, and influential world city. I saw firsthand the level of respect and admiration that Kissinger had for the Prime Minister when, years ago, we were both invited to visit Kissinger’s farm. We had a fascinating conversation. I asked Lee how he had learned to implement what Kissinger calls a “strategy of excellence.” He responded that he had been a graduate student in Britain right after World War II – when the Labour government was nationalizing everything and crippling the economy. Every time Lee faced a problem, he would ask what British Prime Minister Clement Attlee would have done and promptly did the exact opposite.

Finally, Kissinger describes the first woman prime minister in British history, and one of my favorite leaders, Prime Minister Margaret Thatcher. In a world dominated by men, she was dominant. Using a “strategy of conviction,” Thatcher set out to destroy the moral basis of socialism. She was so successful, that for the last 40 years, no openly left-wing Labour Party leader has been able to win the prime ministership. Thatcher’s clear convictions, courage, and sheer willpower enabled her to turn around the British economy, win a war with Argentina, forge an alliance with President Ronald Reagan to bring down the Soviet Empire, and revitalize British self-confidence and entrepreneurial spirit.

Dr. Henry Kissinger’s “Leadership: Six Studies in World Strategy” is a book that every citizen can learn from, and that every leader should study again and again. I look forward to sharing my conversation about this book with Dr. Kissinger on my Newt’s World podcast, which will be released this Sunday.