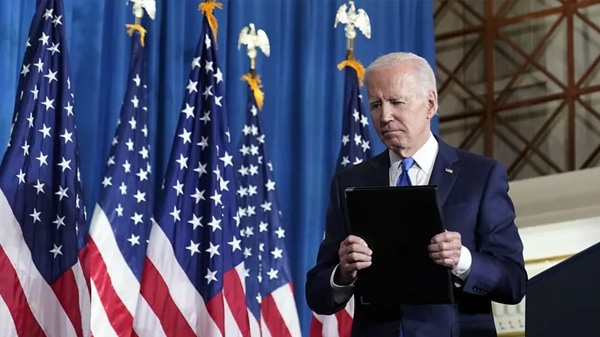 Joe Biden has not addressed the things that matter to most Americans.  He has denigrated over half the country and pushed them into angry opposition.

This is going to be a challenging weekend for the Democrats.

The Wall Street Journal’s report that white suburban women had swung 27 percent from favoring Democrats in August to favoring Republicans in October is a signal of what is about to happen. As Dana Perino suggested on Fox News, the decisive moment may have been shopping for back–to–school supplies. Even women who don’t have kids talk with their friends and relatives and pick up on the anger over the dramatic rise in prices for everything.

This weekend is going to accelerate that swing. I have a friend who says his wife comes home in a rage every Sunday after buying the week’s groceries. From Cheerios, to milk, to eggs, to meat, everything is getting more expensive. Another friend says he has not bought steak in a year because it is simply too expensive (and he and his wife have pretty good jobs). He said it’s just a matter of principle.

This weekend, the undecided voters (and the lean Democrat voters) are going to fill up their gas tanks and get irritated by the price (gasoline prices are still higher than when Trump left office). They are going to go grocery shopping and get angry all over again. Then they are going to go home, turn on the local news, and watch the worse crime wave in 50 years.

When they turn to politics in the last few days before they vote, they are going to see clips of an angry, bitter old man tearing America apart with the most vicious and divisive language of any President in American history (See Joe Biden’s recent speeches in Philadelphia and Washington D.C.). They are going to be reminded that while Biden’s last pre-election speech was filled with vicious attacks on Republicans, he did not say anything about the current crises: the cost of living, the looming diesel fuel and heating oil shortages, the explosion of crime in our cities, human and drug trafficking at the southern border, or the radical brainwashing of our children in schools.

Simply put: Joe Biden has not addressed the things that matter to most Americans.  He has denigrated over half the country and pushed them into angry opposition.

Meanwhile, the Republicans are gaining momentum almost everywhere. They will probably gain 44 or more seats in the U.S. House and likely add four or five Republican Senators (with Tiffany Smiley the swing seat in Washington State).

And we will see major gains in gubernatorial races. (Lee Zeldin, Kari Lake, and Tudor Dixon are strong, intelligent, energetic, and problem-solving gubernatorial candidates who are going to change the balance of power in their states.) The tide is clearly rising for Republicans and receding for Democrats.

Tides like this occur when the country talks to itself. Americans share their personal concerns with their friends, neighbors, and colleagues. Gradually, a consensus grows that things are not working and the current team must be replaced. When personal shared conviction about the reality of failure and the importance of change sets in, all the advertising in the world can’t change it.

Democrats can attack Republicans all day, and it does not offset going to the gas station and the grocery store. Nor does it mask the brutal reality of the evening news. When an illegal immigrant attacks Paul Pelosi at his home, people know there is something profoundly wrong. When people who have been jailed multiple times are repeatedly let out to kill, rape, carjack, and rob others, people realize the system has failed.

The final blow to Democrats is their inability to understand how real the pain and fear is for the American people. When Gov. Kathy Hochul asked in a debate “Why does it matter?” when talking about crime, she gave Zeldin the opportunity to appeal to every New Yorker who is concerned about his or her safety – and that is increasingly becoming every New Yorker.

This may be the worst weekend for Democrats since before the election of 1980, when Ronald Reagan built momentum and went on to defeat President Jimmy Carter by the biggest electoral margin in American history (while also carrying a new GOP majority in the U.S. Senate for the first time since 1954).

You can feel the momentum building.

Hang on for the political ride of your lifetime – and make sure everyone you know votes by Tuesday.