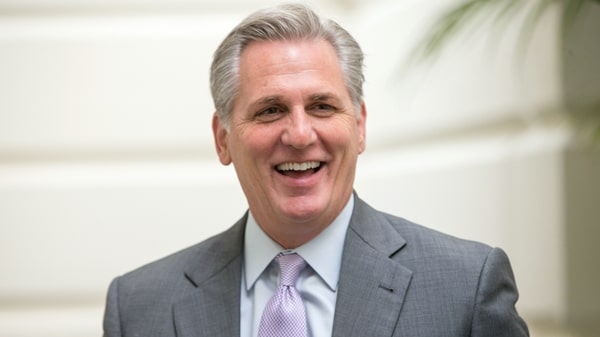 Kevin McCarthy has brought together the largest Republican coalition of any speaker in modern history.

The effort by a handful of unhappy Republicans to blackmail the rest of the U.S. House Republican Conference is nothing new.

The record for this kind of struggle was set in the longest speaker election in House history, when Nathaniel Banks was chosen in 1855 after 133 ballots. That agonizing fight took two months of voting. Imagine the C-SPAN audience it would have generated.

So, now, we have a new struggle between Speaker-designate Kevin McCarthy and the handful of members who are trying to take advantage of the narrow Republican majority by blackmailing their colleagues to get their way. It leaves me with a few questions.

I have been reading the news accounts and talking with people in the House, and I frankly can’t figure out what the blackmailers want.

I use the word blackmailers deliberately. They are trying to exploit the vulnerability of their House Republican colleagues to get what they want – even if it is not what the rest of the conference wants. They are not just shaking down McCarthy, they are shaking down their fellow House members who voted for him.

Remember that when members were asked on Nov. 15 to choose between McCarthy and Rep. Andy Biggs, the House Republican Conference voted 188 to 31 for McCarthy. That is an 85 percent majority. In most elections, that’s considered decisive. But not to the blackmailers.

In effect, this small band of self-righteous opportunists are signaling to their colleagues that any willful group can hold the entire majority ransom over any issue they want. This is a formula for disaster and would make governing impossible.

If McCarthy and the House GOP leadership caved to the first group of blackmailers, what would they do when the second, third, and fourth groups showed up? If the hardline conservatives can blackmail the conference, then so can the moderates or any regional group (Californians, New Yorkers, Floridians, Ohioans, and Texans). Each could form regional blackmail groups.

I also wonder what Biggs and the other blackmailers think they’ve done to earn the speakership. They challenge McCarthy’s leadership, yet he has campaigned more to create a Republican majority than anyone since Boehner in 2010. Since I spent 16 years working to grow the first House GOP majority in 40 years, I have a serious bias toward leaders who earn that position over members who just want it.

Let’s compare McCarthy’s efforts to earn the speakership and his competitor in the November conference, Biggs of Arizona.

Set aside the $500 million McCarthy and his allies raised during the 2022 campaign cycle. Some of the blackmailers seem to think that effort doesn’t count (it does) because he had the power of the conference (and they don’t).

Remember that McCarthy’s leadership began with his amazing recruiting and support in the 2020 cycle. He shocked the experts who expected the House Republicans to lose 25 seats. Thanks to his leadership, Republicans won 14 seats. That was a swing of 39 seats from the predictions.

McCarthy has been the most aggressive recruiter in history. He has found and pulled in an historic number of new members – and significantly broadened the GOP.

McCarthy’s travel schedule reflected the depth of his personal commitment to electing a House GOP majority. In the 2022 cycle, he was in 47 states and spent 311 days on the road. That is what earning the speakership look likes. Without McCarthy’s effort, we might not have seen Jen Kiggins, Mike Lawler, Juan Ciscomani, Tom Kean, or many others joining the new Congress.

And while McCarthy has been leading this historic recruitment and campaigning efforts, he’s also been leading in the Capitol.

He united Republicans against the Democrats’ impeachment efforts and January 6 show trials (putting Jim Jordan on the intel committee to fight them directly). Servicemembers are no longer under Joe Biden’s draconian vaccine mandates. Thanks to McCarthy, Reps. Adam Schiff, Eric Swalwell, and Ilhan Omar will not be serving on major committees after they have repeatedly lied to the American people. He’s made clear that he’s going to stop runaway spending – and he’s willing to use the debt ceiling to do so. And he’s personally argued against Biden’s spending agenda for eight-and-a-half hours on the House floor.

Perhaps most importantly – and the greatest indication that he deserves the speakership – McCarthy has brought together the largest Republican coalition than any speaker in modern history. Except for the blackmailers, Republicans are with him.

In the spirit of fairness and debate, we asked Rep. Bigg’s office: “Would you please let us know what all Rep. Biggs did this cycle to help get other Republicans elected (campaigning, fundraising, etc.)?”

Here’s his response to us in full:

“When serving as Chairman of the House Freedom Caucus (HFC), the largest group of conservatives in Congress, I raised funds and campaigned for my colleagues throughout the country.

“Even as the former chair of the HFC, I worked to raise funds and campaign for my HFC colleagues.

“It is almost unusual to claim that a person who has been in Republican leadership for twelve years and has had access to the fundraising apparatus of the national party, should be rewarded with the office of Speaker of the House for raising more dollars than a rank-and-file member. Of course, we would expect Mr. McCarthy to use his access to the special interest fundraising lists to raise more dollars than anyone else.

“I also released a platform, the America First Contract, that offers planks of an affirmative Republican plan including legislation, how to use leverage against the Biden Administration, and a partial list of investigations and oversight. That plan was released many months before the election.

“Americans have asserted a desire to change the path that we are on. It may be uncomfortable and seem difficult, but without a change, we will persist on a suboptimal path. We need to change the status quo, and that means changing our leader.”

When we asked again for specific campaigns Biggs helped, we were told to look up the Federal Election Committee reports ourselves. Of course, those reports don’t show where Biggs campaigned, who else he helped get elected, or how many candidates he recruited.

You decide whether blackmail and opportunism top hard work and leadership to earn the speakership.

Let your representatives in the House GOP know your feelings.