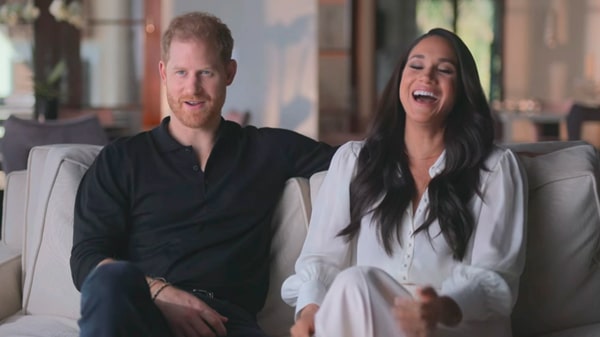 The Harry and Meghan Netflix series is not – repeat not – magic.

Ok, I will admit it. Callista and I got drawn into the six-part series on Prince Harry and Meghan Markle.

The opening music is reminiscent of Downton Abbey, which we adore and constantly rewatch. It is like an old friend. (We were once lucky enough to have Lady Carnarvon take us through Highclere Castle and share scones and coffee with us. It was magic.)

Harry and Meghan as a series is not – repeat not – magic.

It is the home movie coverage of a train wreck. Loving friends are interviewed about the horrible experience Meghan and Harry have had at the hands of the wicked staff of the “institution.” They also bemoan the sheer jealousy of the royals. (Don’t you love that term? Americans always have a secret thing for the family they rebelled against and defeated for our independence.)

Callista and I have a bias in favor of the royals, because we watched “The Crown,” and enjoyed the marvelous performance by Helen Mirren as the late Queen Elizabeth in “The Appointment.” That is a play about the weekly appointment the Queen had with each of her prime ministers, starting with Winston Churchill. Former Prime Minister Tony Blair once told me that he was amazed how much Queen Elizabeth had learned over the years and how helpful her advice was.

So, we watched the self-pitying, whining, and cringe-inducing explanations of how marrying into a monarchy had brutalized Meghan – and how poor Harry had never gotten over being born second and watching his older brother William be groomed to be king. I felt I was watching two juveniles who simply could not come to grips with the real world.

It is a little suspicious that they just happen to have so many hours of home movies. It made me wonder if they had been planning this TV extravaganza for a long time. There were reports almost as soon as they resigned from their royal duties that they had signed a $100 million contract with Netflix.

Of course, the series explains why they need the money. Staying in a 22-acre estate in Los Angeles, ensuring enough security, traveling in private airplanes, all these aspects of “the simple life” add up.

As I watched the series, it became clear that Meghan was a professional actress. She delivered her lines, occasionally had a tear, and paused at the right moments for the right amount of time.

In all fairness, the most poignant and real parts of the series were Harry’s flashbacks to his mother and the impact Princess Diana’s estrangement from the royal family and her death had on him as a child. His memories of his mother and the clips of her interviews in which Princess Diana described how the royal family mistreated her are compelling. They help us understand how easy it was for Harry and Meghan to cast themselves as the next generation of the same trauma. In a sense, Harry and Meghan are reliving the tragedy of Princess Diana as their own experience.

However, I found it hard to feel sympathy for a couple who have had almost everything. When Meghan described the estrangement from her father, I wondered if at least a little of that isn’t a comment on her. When Harry described the wicked staff at the palace leaking attacks, I wondered about the value of all the good things the palace had done.

There is a telling moment early on when the queen rejected Harry and Meghan’s request to live in Windsor Castle and instead gives them Frogmore Cottage. Only when I looked it up did I learn it has 10 bedrooms. So, being denied Windsor Castle and forced into a 10-bedroom mansion (which they call a cottage) set the stage for Meghan’s feeling of alienation. Really?

You may want to watch the series for yourself. It is a nice break from the Russian invasion of Ukraine, the Iranian effort to get nuclear weapons, the North Korean ballistic missile launches, the excruciatingly petty conflicts and gossip of Washington politics, and, in our case, the tragic Green Bay Packers season.

You may find yourself rooting for Harry and Meghan in their desperate search for happiness in a cold world of nasty royal family staff, and vicious British newspapers.

A little something to do during the holidays.