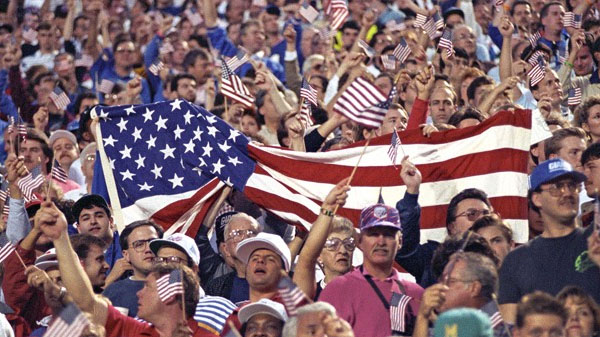 Despite every effort of the Woke left and its allies in the left-wing news media, most Americans remain proud of our country and value patriotism. McLaughlin & Associates did a survey for Gingrich 360, and the results were far more definite than the leftwing media would lead you to expect.

Despite every effort of the Woke left and its allies in the left-wing news media, most Americans remain proud of our country and value patriotism.

The greatest dangers facing the Democrats in 2022 and 2024 are their radical wing’s constant outbursts of public anti-Americanism and their “woke” efforts to coerce Americans into accepting ideas they don’t believe – and in some cases deeply repudiate.

Despite everything you see in the woke-radical left-dominated media, Americans remain remarkably traditional in how they see themselves and how they value patriotism.

McLaughlin & Associates did a survey for a Gingrich 360 project we are working on, and the results were far more definite than the leftwing media would lead you to expect.

So, the next time you hear some leftwing figure promoting racial or tribal identity over a united American identity, remember they are talking to one-tenth of the country and are rejected by 85 percent of the country.

While the left focuses on anti-American distortions of history and diatribes against the United States, three-out-of-four Americans (75 percent) also agree that America is the freest and most democratic country on the planet. This is true for Black Americans (64 percent), Hispanics Americans (72), and immigrant households (77 percent).

After all the ranting about systemic racism, critical race theory, and other efforts to get people to think in terms of tribal divisiveness, the American ideal remains unifying and oriented toward individuals rather than groups.

In fact, by 91 percent to 5 percent, Americans agree with Reverend Martin Luther King Jr. that the content of a person’s character is more important than the color of his or her skin.

This remarkably consistent support of the American people for a positive view of America is a warning to the left: If you persist in being the racist, negative, divisive party that is trying to use the government and societal elitism to force tribal identities upon the American people, you will be rejected by massive majorities.

Americans do not accept your warped and destructive repudiation of America.