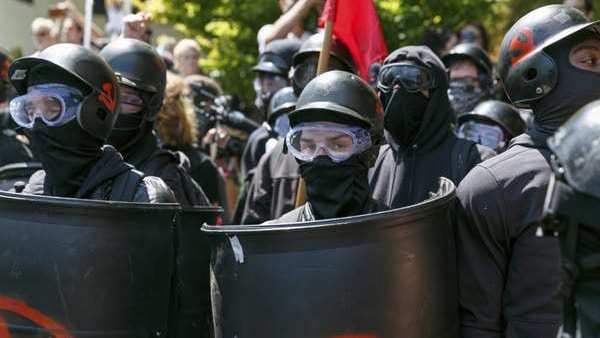 No word in the English language is weaponized more freely and recklessly by people who don’t know what it means than “fascism.” As George Orwell observed in 1946, the word “fascism” has “now no meaning except in so far as it signifies ‘something not desirable.’” And, as Jonah Goldberg noted in his book, Liberal Fascism, the word “fascist” has basically come to mean a heretic “worthy of excommunication from the body politic.” In other words, “fascist” is the ultimate political slur, branding someone as “the other,” “the undesirable,” someone who is evil and must be punished for his sins.

Of course, people tend to associate fascism with Nazism, hyper-nationalism, and militarism, which makes the term all the more devastating as a political weapon. But even historians and political scientists aren’t really sure what fascism means. It seems fair to say, however, that most people agree that fascism is at least tyrannical and authoritarian, if not totalitarian.

Political leftists especially weaponize the term, as people generally (and incorrectly) think of fascism as a right-wing phenomenon. In 2000, for example, Bill Clinton called the Texas Republican platform a “fascist tract.” In 2007, New York Times reporter Chris Hedges wrote a book titled, American Fascists: The Christian Right and the War on America. Today, President Trump’s critics accuse him of running a fascist regime. The examples are endless.

Ironically, those today who weaponize the word and portray themselves as soldiers against fascism are the ones acting like fascists. Indeed, the left-wing woke-sters and social justice warriors who accuse others of such heresy, almost always erroneously, are the ones practicing real fascism.

The past couple of weeks prove the point. Most obviously, we have watched Antifa, which defines itself as an anti-fascist movement, hijack the nationwide protests triggered by the killing of George Floyd to incite riots, loot stores, destroy cars, burn buildings, and attack police officers. Yet, these same people expect to garner support and sympathy because they claim to be advocating “anti-racism” and fighting for equality. Try having a rational debate with antifa in the street and see how it goes.

Other recent incidents amid the ongoing demonstrations highlight the woke left’s staunch intolerance. Let’s begin with Sen. Tom Cotton (R., Ark.), who wrote an op-ed with the headline, “Send In the Troops,” which the New York Times published last week. In the article, Cotton said that widespread looting and large, violent, nationwide riots following Floyd’s death had “plunged many American cities into anarchy.” So, he argued, if local law enforcement is too outnumbered and overwhelmed, governors should mobilize the National Guard. And if that isn’t enough, then the president can and should employ the military under the Insurrection Act to restore law and order — while peaceful protests continue.

The uproar was immediate and fierce. Younger, woke staffers at the Times publicly castigated their bosses for allowing the op-ed to go to print. The Twitter mob claimed that the article put black journalists’ lives in danger. Democrats also piled on the Times, whose senior leadership sacrificed junior editors to the angry mob to save themselves, making erroneous claims about a “rushed” and “flawed” editorial process. Ultimately, the pressure from the mob was too great, and the Times’ editorial page editor was forced to resign for publishing a legitimate opinion with which people disagreed. Cotton’s critics claim he called for an American version of Tiananmen Square in 1989, but the reality is he just penned a provocative opinion — one that, by the way, some Republicans disliked. But the social justice warriors were the ones loudly calling for somebody’s head.

As this chaos was happening, professional football player Drew Brees, quarterback for the New Orleans Saints, was forced to walk back and apologize for saying — get this — that he would “never agree with anybody disrespecting the flag of the United States of America.” Brees made the comment when, in the wake of Floyd’s death, an interviewer asked him about former football player Colin Kaepernick kneeling during the national to protest police brutality.

The backlash among sports journalists and current and former players, many of whom have become social justice warriors themselves, was simply insane. Watching their disdain and disappointment, one would have thought that Brees decided to join al Qaeda — some panels even discussed on television whether the Saints can no longer play with Brees. But, no, his crime was showing reverence for the American flag. Critics argued that, because Kaepernick’s protest is about police brutality and systemic racism rather than the flag itself, Brees was distorting and damaging the cause. That’s fair enough, but can’t the man have his own opinions that don’t conform completely to those around him? What about diversity?

The takeaway is clear: The progressive left advocates tolerance — just not for those who have opposing views.

This has been obvious for some time. We know that universities, almost all overwhelmingly left-wing, silence conservative voices and really any opinions that don’t adhere to progressive doctrine. Guest speakers are shouted down; honest debate is considered a relic from a past age. And, of course, we know about the mainstream media’s political bias. Newt covers plenty of other examples in his upcoming book, Trump and the American Future, such as employees at Google demanding the removal of an eminently qualified individual from an unpaid advisory board simply because of her political views, which weren’t even radical — just not far-left.

Add the left’s assaults on freedom of religion — conservative Christians are fascists, remember? — and one finds not so much a benign campaign for social justice but rather a chilling push to crush any opposition. Who’s being fascistic?

The hard left — comprised of so-called progressives — may say it’s fighting for tolerance and equality, but it’s truly trying to silence all dissenting voices, sometimes with violence. As Newt notes in his upcoming book, the leftists launching their aggressive crusade against supposed bigotry and fascism end up becoming the bigots and fascists themselves. They seek total control of American society, to revolutionize what they view as a fundamentally flawed, oppressive country. And this cohort of wannabe revolutionaries is ascendant within the Democratic Party, overtaking the center-left.

In Liberal Fascism, Goldberg argued that, if fascism truly comes to America, it will be “smiley-face fascism” from liberals and progressives. In other words, “We the government are forcing you to do this thing because it’s for your own good and meant to promote tolerance and equality.”

This seems to be the case today. The anti-fascists are, in fact, the fascists. Except many of them don’t have smiley faces. And if they have their way, none of us will either.