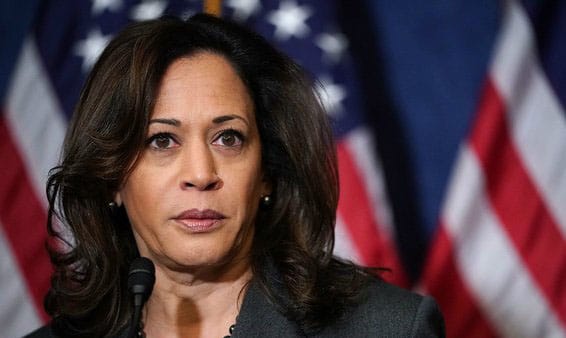 This came as a surprise to some given Sen. Harris’s previous relationship with former San Francisco Mayor Willie Brown in the 1990s, questionable record as Attorney General for the State of California and San Francisco District Attorney in the early 2000s. However, as Speaker Gingrich pointed out in a recent tweet, “Kamala Harris wasn’t the wisest decision – it was his only decision.”

Leading up to Biden’s pick, an AP photographer snapped a photo of Biden’s notes during a July press conference. The hand-written notes featured Kalama Harris’s name on top with some phrases written below: “Do not hold grudges.” “Campaigned with me & Jill.” “Talented.” “Great help to campaign.” “Great respect for her.” It is no surprise that Biden needs to remind himself to avoid thinking about his troubled past with his running mate.

During the primary campaign, Sen. Harris was ever on the offensive when it came to exposing her now former-rival-turned-friend’s previous view’s on busing, Medicare-for-all, and women. Biden was distraught by some of these remarks, referring to many of them as “mischaracterizations” of his position. What is consistent with many of these political jabs are both Democrats’ stance’s on Federalism.

Although the Obama-Biden White House has a lot to show on the contrary, throughout the Democratic Primary, Biden constantly presented himself as a relatively reserved executive.

During the third Democratic Primary debate on Sept. 12, 2019, Sen. Harris was presented the following question as to whether she agreed with Biden’s stance on the use of executive orders and gun control:

Harris then pivoted to face Biden, and smirked, “Hey Joe, instead of saying no we can’t. Let’s say yes we can.” To which he replied over her laughter, “Let’s be constitutional. We got a constitution.”

In fact, not since the early days of our Republic have we seen potential members of the same White House at such odds with one another. Prior to the 12th Amendment, the Presidential candidate who received the second highest number of electoral votes became the Vice President. This stipulation caused Thomas Jefferson, a Democrat-Republican, to become the Vice President to his ‘former-friend-turned-rival’, John Adams, a Federalist, in 1796. Harris’s and Biden’s tumultuous past may reawaken these antiquated bouts of infighting.

Although face time between Harris, Biden, and the media has been brief, the now unified campaign will have to tread lightly when answering questions about federal authority and executive orders. Harris appears poised to hijack Biden’s supposedly moderate messaging. According to Biden’s website, he currently endorses a gun control strategy which relies heavily on legislation but does make mention to ”executive action” as well.  The duo has already pondered instituting a mandatory 3-month mask mandate to slow the spread of the coronavirus upon first entering office.

It will be interesting to see how much further to the left Biden’s running-mate will pull him.