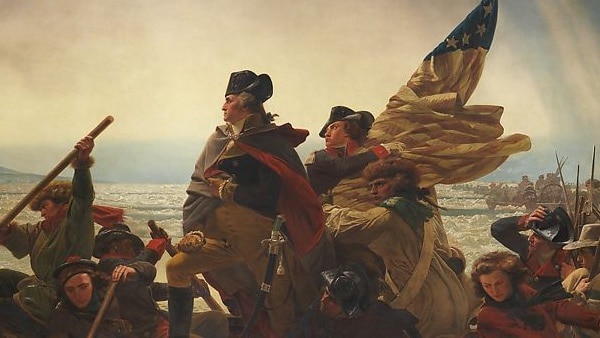 [vc_row][vc_column][vc_column_text]A must-listen! Kevin McCarthy takes a closer look at the famous portrait of Washington crossing the Delaware. His insight is powerful and inspirational on a historical message relevant to our continued commitment to our incredible country

And you’ve been to my office in my office. I have that portrait of Washington crossing the Delaware. Everybody remembers it and sees it. And they know of that painting the famous painting and the thing people don’t quite realize that wasn’t painted by somebody who watched that the event on Christmas in 1776. It was painted by a man named Emmanuel Leutze, who was an immigrant who had lived in America and went back to Germany. He wasn’t there. He painted it in 1850, 1851. And he painted it because he wanted to inspired Germany to have a revolution based upon the values of America, believing in the individual. So he gets it historically incorrect. But he puts Washington in a rowboat with 13 people, but he only shows you 12 faces. Well, Washington and historians will tell us he crossed into Durham boat. He has Washington standing up wearing a ceremonial uniform with his hand on his chest. You look at George Washington. This man has probably never lost the battle, but history tells us had never won one yet. That was our first victory when we surprised the Hessians. But go online and look at who’s in that boat. When you look at the second row where he’s wearing a beret, he’s Scottish. But look at the person directly across from him in the green jacket. He’s African American. Come down to the middle of the boat in that red rowing, very feverously is a woman. And in the very back is a native American. I can’t tell you from a historical fact if they were in the boat. But just young, this young immigrant who lived here 10 years, that’s who he believed would be in the boat. Now, the second to last person is this farmer and he has his hand across his face. And it’s the hand of the 13th person that nobody sees. You see what Emmanuel was saying is here we are not even a nation, but an idea, an idea about Liberty and individual rights and freedom. And we’ve never won before a battle, but we’re willing to risk everything on our holiest of night. Here’s a hand would you get in and join us? That’s as true today as it was, then we need you in the boat together. We need to all row in the same direction. We’re going to have choppy waters. We’re going to be in fights that people are going to give the odds against, but come November. We’re going to shock the world and we’re going to have a commitment of what we’re going to do. And we’re going to have a plan and we’re going to carry it out because we will keep our commitment to this nation. And once again, we’ll make sure the next century is ours.