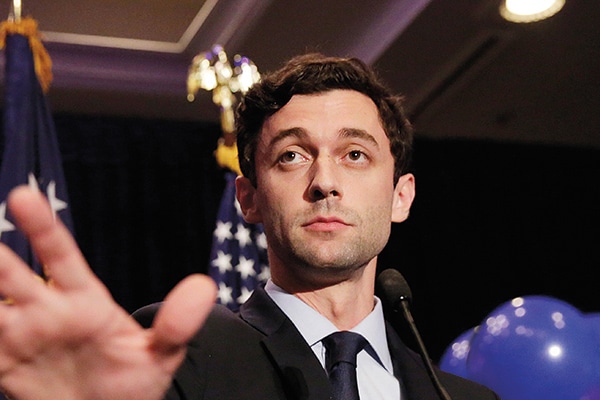 I refer to San Francisco Jon Ossoff because I think it is a more accurate reflection of who he is.

Ossoff’s first runoff fundraiser focused on raising money in San Francisco specifically – and California in general. His ideology is closer to Kamala Harris, Nancy Pelosi, and other California liberals than it is to Georgia citizens. You see this in his endorsement of Bernie Sanders’ views and his defense of Raphael Warnock’s radicalism.

Already, he and Warnock have raised 80 percent of their runoff campaign money from places like California and New York rather than Georgia. So, his loyalties naturally follow the money of Californians and New Yorkers – not the votes of Georgians.

You can understand everything you need to know about Ossoff’s political philosophy from Collin Anderson for the Washington Free Beacon. On Nov. 9, he wrote that Ossoff and Warnock kicked off their runoff campaign with an event with Silicon Valley donors – not Georgians. Anderson wrote:

“Georgia Democratic Senate candidates Jon Ossoff and Raphael Warnock will attend a Monday night fundraiser with Silicon Valley progressives in an attempt to court deep-pocketed California donors. The ‘Save the Senate’ virtual event will be held by Manny’s, a San Francisco-based restaurant that is ‘proudly located’ in ‘a historic hub of activism and progressive action,’ according to its website. Owner Manny Yekutiel—who previously served as Silicon Valley fundraising director on Hillary Clinton’s failed presidential campaign—advertised the fundraiser by stressing the importance of Georgia’s upcoming January runoff elections. In a Friday Facebook post, Yekutiel said the races mark Democrats’ ‘last hopes to save the Senate.’”

Of course, none of this reliance on California and non-Georgia money is new for Ossoff. As Anderson further reported:

“Ossoff has relied on California donors throughout his bid to unseat Sen. David Perdue (R., Ga.). The Democrat raised $3.37 million from the Golden State in the third quarter, more than double the $1.64 million he raised from Georgians. Ossoff’s failed 2017 congressional bid saw a similar dependency on out-of-state contributions—roughly 98 percent of the Democrat’s campaign cash in the race’s final two months came from outside of Georgia.”

Getting 98 percent of his money from outside Georgia in the last 60 days helps explain why Ossoff lost that House special election – despite having spent the most money ever on a House race up to that time.

In fact, Ossoff was such an ineffective candidate – and so clearly more interested in California than Georgia – that despite all his spending he only gained 1/10 of a percent in polling between the first round and the runoff in 2017. Karen Handel, in the same period, jumped from 19.8 percent to 51.8 percent – 320 times Ossoff’s increase from his California millions. Apparently to know him is not necessarily to vote for him.

Ossoff should have felt right at home at his and Warnock’s fundraiser at Manny’s, which had also hosted fundraisers for Harris, Beto O’Rourke, and Pete Buttigieg. That was the kind of team for whom most Georgia voters have no intention of voting. It also proves how radical San Francisco Jon Ossoff really is.

The national implications of the Georgia race go from coast to coast. Ossoff and Warnock expected more than 3,000 people to come to their San Francisco fundraiser. On the other coast, Democratic Minority Leader and New York Sen. Chuck Schumer promised to “take Georgia” and then “change the world.”

The stakes are so high – and the importance of the Georgia races are so relevant to the entire country – an even bigger fundraiser is being planned in California to follow up on the San Francisco event.

Despite all his out-of-state fundraising, in November, Ossoff ran roughly 100,000 votes behind Vice President Joe Biden, while Sen. Perdue was running about 1,000 votes ahead of President Donald Trump. Only the 115,000 votes for a third-party Libertarian candidate prevented Sen. Perdue from winning without a runoff.

Ossoff now faces a new challenge. The pressures from the radical, activist wing of the Democratic Party are drawing him further and further to the left. As Greg Bluestein wrote for the Atlanta Journal Constitution on Nov. 30, Ossoff clearly welcomed his endorsement from Sen. Sanders. This is a “strategic shift,” according to Bluestein.

“Three years ago, when Ossoff was running to flip a Republican-controlled suburban Atlanta House district, the Democrat would likely have sidestepped the question by saying he was focused on Georgia-centric issues.

“That was a different race and a different political environment. Now, as Ossoff and Raphael Warnock try to recreate the coalition that narrowly boosted Joe Biden to victory in Georgia, the two are trying not to alienate voters who identify with Sanders’ self-described brand of democratic socialist politics.”

Perhaps more than anything, Ossoff’s support for Warnock’s radical positions may be the nail in the coffin. As Anderson wrote for the Washington Free Beacon on Nov. 30:

“Warnock said many police officers behave like thugs and bullies in 2015, argued that America must ‘repent for its worship of whiteness’ in late 2016, and said that ‘nobody can serve God and the military’ in 2011. Ossoff’s defense of the speeches could alienate Georgia voters ahead of the state’s January runoff elections—the Peach State is home to the fifth-largest active duty military population in the United States, according to a 2018 Department of Defense report.”

Maybe Ossoff should adopt Tony Bennett’s classic song “I left my heart in San Francisco” as his theme song. He clearly can’t use James Brown’s “Georgia on my mind.” And that is why Sen. Perdue is going to be re-elected by a surprising margin.