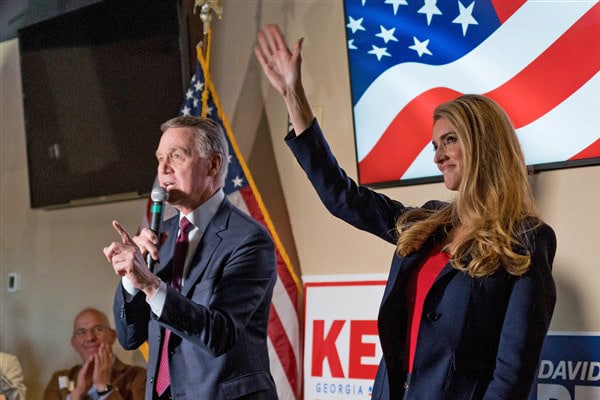 In these last hours before the Jan. 5 run off for the US Senate seats in Georgia, I have only one message.

Vote as if America depends on it – because it does.

Jan. 5 is the most consequential runoff election in American history.

If Sens. David Perdue and Kelly Loeffler win, the Republican majority in the Senate will be empowered to moderate the Joe Biden-Kamala Harris administration. It will be able to stop virtually every radical appointment to government and proposal for legislation.

If the two radicals, Raphael Warnock and Jon Ossoff, win, then Sen. Chuck Schumer will be able help Vice President Harris (who will serve as President of the Senate) in pushing through radical appointments and legislation.

Furthermore, the difference in service to Georgia communities between Perdue-Loeffler and Warnock-Ossoff is enormous.

Warnock has already proven he will be attentive to radicals and those in the Black community who agree with him (but not those who disagree with him). However, since Warnock describes people who want to cut taxes as baby killers in the tradition of King Herod, it is difficult to see how he can serve the majority of Georgians, who prefer lower taxes to higher taxes.

Similarly, Warnock is openly, proudly, and noisily for abortion on-demand – even in the ninth month – and for tax paid abortions. It is hard to see how he is going to reach out and work with the millions of Georgians who are pro-life.

Ossoff will clearly be focused more on the San Francisco values of Harris and Nancy Pelosi than on the issues that matter to Georgia. Ossoff raises far more money in California than in Georgia. It was no accident that he and Warnock had their first joint fundraiser in a restaurant in San Francisco.

In fact, both Ossoff and Warnock raise the overwhelming bulk of their money from non-Georgians, and they are clearly the candidates of liberals and radicals across the country.

Symbolically, it was revealing when New York City Mayor De Blasio said at his press conference just before Christmas that he could not finalize his city budget (which is more than $3 billion in deficit for this year alone) until the Georgia Senate races were decided. Mayor De Blasio is hoping an Ossoff-Warnock victory will open the way for New York City to reach into Georgians’ wallets to bail out his bankrupt administration.

By contrast, we know from six years of Sen. Perdue’s hard work that he has helped Georgians across the state. In town after town, there are people, companies, and causes that Perdue has helped. He fought to cut taxes for every Georgia family. He voted to strengthen and train – not defund – our police officers. He worked to roll back unnecessary and expensive regulations on Georgia’s farmers. And he supported the CARES Act to help Georgia fight the COVID-19 epidemic.

Similarly, it is clear from her first year in office that Sen. Loeffler has a clear focus on Georgia. She has been crisscrossing the state helping solve problems and cutting red tape in the federal government to get aid to Georgia communities and businesses. In the Senate, she fought for the US-Mexico-Canada Agreement which helped return agriculture and manufacturing jobs to Georgia. She has fought against radical pro-abortion proposals. And her work on the Veterans Affairs Committee has helped ensure Georgia’s veterans get the health care they deserve – and the training and education they need to succeed after their military service.

Both Sen. Perdue and Sen. Loeffler have clear records of voting conservative and standing firm for the values of more freedom, more jobs, lower taxes, and less bureaucracy. Their records are a clear contrast with the Warnock-Ossuf record of radicalism.

The choice is clear.

Make sure every person you know votes on Jan. 5. To boycott the election is to surrender America’s future.

The fate of America will be affected by the outcome of this runoff.

You can – and you must – make a difference.