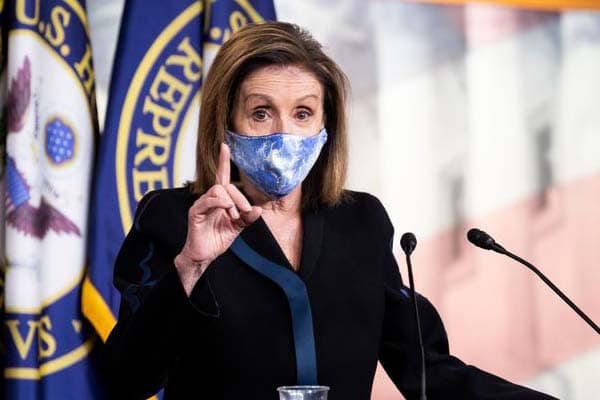 Why is Nancy Pelosi becoming more negative? Well, the reality hit me this morning. With a dwindling vote margin in the House — and strong leadership from Republican Leader Kevin McCarthy — the reality is she could be the last Democrat Speaker for a while. Thinking about another California Republican, Ronald Reagan (whose 110th birthday would be this Saturday) under McCarthy’s leadership, you’re going to see a much more unified Republican Party going forward.

It really hit me this morning, the reason Nancy Pelosi has become so negative and so nasty is that she realizes they’re going to lose the house next year. With when Claudia Tenney is sworn in, which I think will happen next week, there will only be a five vote margin. The Republicans will be a 213. Given the fact that we picked up 54 seats after Clinton won and we picked up 63 seats after Obama won, the mathematical odds are that, that Pelosi is the last Democrat Speaker for a while. And then McCarthy is the next Speaker are just amazing. And I was looking at how nasty she had become, and I was trying to figure out, you know, what is going on? And she’s an old professional. She’d been around forever. And this is either, you know, a sign of aging or I think more likely it’s a sign of desperation.

She is being this vicious and this nasty because she sees the inevitable coming. She knows the Democrats are going to lose control and she doesn’t, there’s nothing she can do about it, except so she gets nastier and meaner, the more she thinks about it. I think it’s a fascinating period. And I think Kevin McCarthy yesterday indicating a willingness to take down one of the committees, but not both in indicating a willingness to support his leadership team, recognizing that Liz Cheney has permanent problems with a large part of the conference now, because not, not because she voted to impeach the President. But because she, she put the press release out under her name as conference chair when the conference was 200 against antenna and fever, and that’s what really caused the uproar. But Kevin came through it. The Republican party is gonna be unified. The debate today is going to be fascinating. And on Saturday is Reagan’s birthday. I think it’s a hundred and 10th. And my daughter, Jackie Cushman just wrote a great column about it. And which I will share with all of you.

And I think in the Reagan tradition, we can afford to be optimistic. We represent the future. We’re positive. They’re going to lose their desperate. I mean, when you watch AOC is fantasy TV in which even Democrats are saying, wait a second, you weren’t there, you weren’t in the Capitol. How can you have been so frightened, cowering hiding plus frankly for somebody who was supposed to be this great national leader, who’s fearless hiding and being quiet is not exactly signal of leadership. So I think AOC is now very confused about what’s going on in her life, which proudly began when her colleagues repudiated her in her effort to hit on the Energy and Commerce committee. So it’s going to be just an amazing couple of weeks. Stay tuned. I will keep sharing ideas with you. And if you find this useful, feel free to share it with your friends and urge them to join the inner circle.