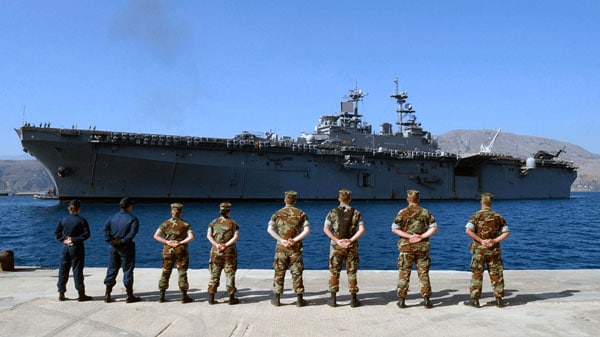 Last week, I wrote a column about a ridiculous pledge that was published in a recent US Navy report on investigating and stopping discrimination within the ranks.

I incorrectly asserted – based on reporting I had seen – that the pledge was being proposed for adoption by the entire US Navy. It turns out the oath only applied to the leadership of Task Force One Navy – the body convened in June which published the report.

The Navy assured us this week that the pledge was never intended to be imposed upon every sailor in the Navy – and that it more represented “guidelines” for the task force leadership’s thinking rather than a solemn oath commensurate to sailors’ devotion to protect and defend the US Constitution from all enemies foreign and domestic.

This was, of course, of some relief. However, the pledge’s language is still partisan, politically charged, critical theory baloney that has no place in our nonpartisan armed forces. So, it remains troubling that this sort of partisan woke-think found its way to a senior task force leadership team comprised of two rear admirals, a force commander, an enlisted captain, and a civilian expert advisor.

“I pledge to advocate for and acknowledge all lived experiences and intersectional identities of every Sailor in the Navy. I pledge to engage in ongoing self-reflection, education and knowledge sharing to better myself and my communities. I pledge to be an example in establishing healthy, inclusive, and team-oriented environments. I pledge to constructively share all experiences and information gained from activities above to inform the development of Navy-wide reforms.”

As I wrote last week, nothing about this pledge indicated to me that the report was focused on making the US Navy a more effective warfighting force which would be better prepared to defend America. It instead sent a signal that divisive, radical, woke-think had infiltrated our military.

The Navy’s quick reaction to my column prompted me to study the full report and its recommendations more deeply. This only made me madder that this obnoxious pledge was included.

Nearly all the report’s 56 recommendations are completely rational and would likely improve the Navy’s ability to recruit and retain the best personnel – so that it becomes a more cohesive and lethal warfighting force. The term “intersectional” – a term of the radical left that seeks to convince all Americans that the US is a systemically racist, sexist, homophobic, xenophobic, and irredeemably evil nation – appears nowhere else in the document. In short, the bogus pledge had almost no relation to the otherwise legitimate report. It was the worst job of branding I have seen in a long time.

For example, it makes perfect sense for the Navy to research and employ better advertising and outreach in minority communities. While the enlisted Navy is already more demographically diverse than the rest of the nation in some respects (19 percent of enlisted ranks are black, while only roughly 13 percent of the country is black) the military branch’s officer ranks are mostly white and male. This is a missed opportunity to have a more well-rounded, experienced officer corps. As the report suggests, the same efforts should be made for recruited and enlisted women, Latinos, and young Americans.

This also means, it is an excellent idea to expand the Navy’s scholarship programs to help recruits and enlisted sailors who do not have a lot of money to enroll in and achieve officer training. A lack of affluence or wealth should not bar Americans from the top tiers of service in the military. Conversely, military service should create opportunities to build prosperous, meaningful careers for any American willing to fight and die to protect our country regardless of background.

Along this line, it also is a good idea to explore Scholastic Aptitude Test (SAT) equivalents for potential recruits from Puerto Rico and other US territories. (Although the recommendation to simply suspend some requirements of the Officer Aptitude Rating test for members of some communities seems concerning.)

A great many of the recommendations to infuse more transparency and data tracking into recruitment, promotion, and retention efforts are also worthy of consideration.

And finally, clearly, discrimination in any form should not be tolerated in our armed forces – or anywhere in American society. As the title of the report suggests, the Navy (and all military) must be united as one force. Service members of any rank who discriminate or sow division along racial, ethnic, gender, or any other line, must be swiftly reported, investigated, and punished if found guilty.

So, even if this pledge will not be imposed upon every sailor in the Navy, it remains inappropriate and damaging.

Communication occurs when it is received – not when it is given. To anyone paying attention to modern American politics, this pledge is clearly divisive political language used by the elite woke left – not practical language used by everyday Americans. The deeply negative reaction it provoked from me, conservative media, and members of Congress has undermined the importance and effectiveness of the task force’s report and its recommendations.

I hope the Navy – and every branch of the US military – takes note of this failure to communicate with all Americans and corrects course.