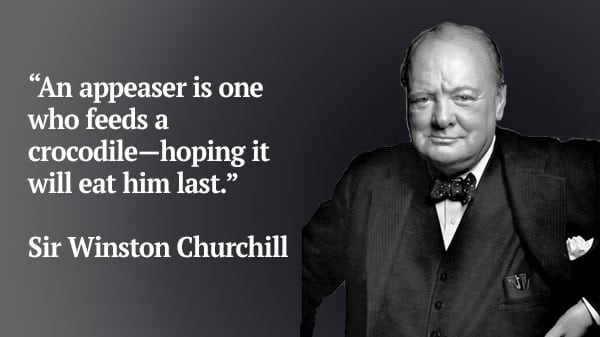 President Joe Biden needs to take a lesson from Churchill and accept Hamas for who and what they are — immoral, anti-Semitic murderers. The American government must step up like Churchill and counter the threat Hamas poses for all Israelis.

In 1933, Winston Churchill read a copy of Adolf Hitler’s Mein Kampf and concluded what few politicians of the time dared: Negotiation and appeasement only work with rational and moral people.  Hitler was clearly irrational in his proposed execution of horrifying atrocities. Furthermore, he was clearly not moral. Hitler was so impassioned and dedicated to his ideology that nothing less than war would stop him. So, as Churchill put it, appeasement of Hitler by the United Kingdom “feeds a crocodile—hoping it will eat [the UK] last.”

It took seven years for British politicians to realize Churchill’s evaluation of Hitler was right and appoint him prime minister. But, by then, Nazi Germany had already invaded Poland, the Czech Republic, France and the Low Countries of Luxembourg, Belgium, and the Netherlands. Countless lives would have been saved if people had dropped their optimistic delusions about humankind’s universal goodness and believed Churchill when he said negotiation wouldn’t work.

Hitler meant what he wrote in Mein Kampf, but people didn’t want to believe that a philosophy that horrible could gain traction. We’re seeing a parallel situation today with the Islamic Resistance Movement (Hamas). Hamas consistently writes about killing Jews in its covenant, but for some reason, the Biden administration and many on the Left don’t want to take their threats seriously. Instead, they call for a ceasefire from Israelis who are trying to defend themselves.

In 2019, Fathi Hammad, a Hamas senior leader, told a group of Palestinians: “There are Jews everywhere. We must attack every Jew on planet Earth! We must slaughter and kill them, with Allah’s help. We will lacerate and tear them to pieces.” Hammad later demanded “people of Jerusalem, we want you to cut off the heads of the Jews with knives.”

President Joe Biden needs to take a lesson from Churchill and accept the Hamas for who and what they are — immoral, anti-Semitic murderers whose ultimate goal is to, as their official covenant states, “raise the banner of Allah over every inch of Palestine,” even if that means “obliterating” Israel as it has “others before it.”

The Hamas are dedicated to their cause of destroying the Jews, and Article 13 of its covenant clearly states:

Hamas doesn’t want peace or a ceasefire. They want the extinction of Israelis.

The answer to the threat of Israeli extinction cannot be ceasefire, as the Biden administration is calling for. Even if there were a ceasefire, Hamas is clear there would be no real conflict resolution.

Hamas is not willing to negotiate with Israel, stating “We will never recognize Israel or cease to fight for our land.” Hamas will not give up their weapons in a ceasefire, claiming that “disarming us is like Satan dreaming of heaven. No one can take away our weapons.” Politicians calling for a ceasefire are asking for another decade of death and destruction when Israeli-Palestinian negotiations fail. Ari Fleischer put it perfectly, “If Hamas disarmed, there would be no violence. If Israel disarmed, there would be no Israel.”

Instead, America needs to lead a movement that parallels the Allied Nations’ program of denazification of 1945. Just as we weeded out and jailed all the civic leaders, teachers, and politicians in Germany and Austria who supported Nazi propaganda, we need to weed out the Hamas’s ideology from Palestine. We cannot allow the next generation of Palestinians to take up the Hamas’ mission of violent genocide against Jews.

Like Hitler during World War II, Hamas cannot be negotiated with. Hamas wants to kill the 9 million Jews in Israel. The American government must step up like Churchill and counter the threat Hamas pose for all Israelis.