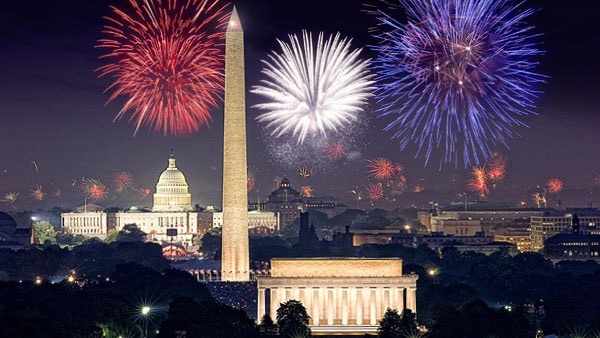 On Independence Day we reflect together as a nation on a remarkable moment in history 245 years ago, when 56 men from 13 colonies gathered in Philadelphia to sign the Declaration of Independence. There, our founders declared with one voice: “We hold these truths to be self-evident, that all men are created equal, that they are endowed by their Creator with certain unalienable Rights, that among these are Life, Liberty and the pursuit of Happiness.”

This act of political and moral courage changed the world forever. Since 1776, the values and ideals enshrined in the Declaration of Independence and the U.S. Constitution have been exported to democracies around the globe and have lifted millions of people out of tyranny, poverty, and oppression.

Unfortunately, some in America seek to diminish America’s founding, rewrite our history, and invalidate the spirit of independence which led our founders to create the greatest, freest, and most prosperous nation on Earth.

Across the country, some communities are turning away from our founding principles, removing statues, and renaming public spaces to erase and replace our history. In the early days of his administration, President Biden disbanded the 1776 Commission, a group of historians, journalists, and scholars who sought to develop a fair and truthful understanding of America’s founding.

So, this year, we must also remember our shared responsibilities as Americans. The great experiment our founding fathers launched in 1776 requires each generation to preserve its freedom for the next. As Benjamin Franklin cautioned, we have “a Republic – if you can keep it.” The lessons of America’s independence were not meant to be left behind in 1776. Our freedom is precious, and we must not take it for granted.

Our founders pledged to each other, their lives, their fortunes, and their sacred honor on the belief that government must derive its power from the people. As Americans, we must remember and renew that pledge. And we must be active citizens who engage in our communities, participate in national elections, and defend our democracy.

We hope you have a wonderful Independence Day!