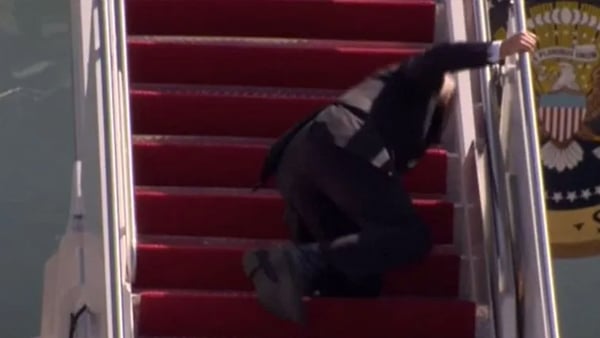 I have been unable to find a single positive thing Biden has done for Americans. He continues to implement and impose his failures on our nation. I wonder: How much more of this can we take?

As I’ve watched the events of the past few weeks – and thought about the nature of Joe Biden’s young presidency – I began to ask myself: How much more of this can we take?

In just seven months, President Biden has overseen a remarkable number of complete blunders. To make sense of them all and consider how to overcome them, I decided to make a list of them. Of course, it would take months of time and writing to list all the errors Biden has made in his 48 years in politics, so I decided to start at his inauguration in January. These are roughly in chronological order. It seemed impossible to rank them as so many of them could have lasting, unforeseeable consequences.

As I write in my upcoming book, Beyond Biden, which will be released on Nov. 2, the first major mistake Biden made was immediately failing to live up to the pledges he made in his inaugural address. In his inaugural address, Biden said: “Today, on this January day, my whole soul is in this: Bringing America together. Uniting our people. And uniting our nation.”

Had Biden actually led from the center as a bipartisan president, he would have quickly formed a strong coalition in Washington and built a strong majority. But, he didn’t. On day one in office, Biden signed 17 executive orders, most of which were highly partisan, with nine being direct reversals of popular, effective policies set by the previous administration. Biden’s day-one action message to a deeply divided America was that talk of bipartisanship was pure baloney.

Biden’s second big mistake was his aggressive effort to cripple America’s energy independence. In his early days of office, he recommitted America to the Paris Climate Accords, which restricts America while giving high-polluting countries such as China a pass. He canceled the Keystone XL Pipeline, which cost Americans roughly 30,000 jobs and contributed to rising oil and gas prices. He also canceled oil and gas exploration in the arctic. Because of these destructive actions, Biden later had to crawl back to OPEC nations and grovel for them to increase production to lower prices.

Desperate to salvage one of his former boss’s few achievements, Biden immediately sought to rejoin the Iran nuclear deal, which will not stop Iran from eventually developing nuclear weapons. It also freed up billions of dollars which Iran can now use in its continued effort to fund terrorism around the globe. This sent a clear message of weakness to our allies in the Middle East and will only benefit Iran – the world’s premier funder of terrorism.

President Biden has consistently failed to stand up to China, which is our single biggest competitor. We know that the Chinese Communist Party intentionally withheld information about the spread of the COVID-19 virus as early as December of 2019. We know it lied to the world about the existence and origins of the virus – and used the World Health Organization to spread its propaganda. Biden has done nothing to hold the Chinese Communist Party to account – and has unconditionally recommitted American tax dollars to the WHO. Chinese Communist Party Chairman Xi Jinping has no reason to believe the American government will be a serious competitor as long as Biden and the Democratic Party is running the country.

Let’s be clear: The historically rapid development of COVID-19 vaccines is all thanks to President Donald Trump. Biden had nothing to do with empowering our private pharmaceutical sector to create the vaccines – or streamlining the regulatory structure so they could quickly get to Americans who needed them. Biden is responsible for setting incredibly low goals for vaccine distribution, leading a completely confused vaccine messaging campaign at the federal level, and further polarizing the country over vaccines by consistently demonizing Republican governors who didn’t toe federal lines – even when Republican states were experiencing fewer COVID-19 deaths than states with Democratic governors with extreme restrictions and higher infection rates.

6 – Surrender at the Southern Border

President Biden has overseen the most porous, permissive, and lawless U.S.-Mexico border in generations. In July, illegal crossings at the southern border hit a 21-year high. This is remarkable, as border crossings typically drop off in the summer, because the desert heat becomes so dangerous. At the same time, deportations of illegal immigrants are at a record low. Biden has essentially surrendered the southern border to whoever wants to come in – including drug dealers, human traffickers, potential terrorists, and other violent criminals. The U.S. Border Patrol is deeply demoralized, and Americans are less safe. Thankfully, the U.S. Supreme Court is beginning to roll-back some of Biden’s disastrous decisions and forcing it to re-implement measures that work – such as President Trump’s remain in Mexico policy.

7 – Betrayal at the Border

I mention this as a separate failure because it is so dramatic and dismissive of Americans’ safety. Biden has allowed record numbers of people to illegally cross the border and stay in America during a global pandemic without any requirement that they be tested for COVID-19 or quarantined before going wherever they want. President Biden and Democrats impose strong restrictions on Americans in the name of defeating the virus, but they impose nothing on the people who are illegally entering the country. This is one of the clearest examples of the contempt this administration and national Democrats have for the American people. It is a complete betrayal.

Just when American jobs were beginning to be revived following the global pandemic, Biden has reinstituted regulations which make it harder to hire people and suggested an $8 trillion spending plan – including $1 trillion in non-infrastructure infrastructure projects and another $3.5 trillion in liberal pipedreams. It is as if he is intentionally reliving the disastrous Jimmy Carter presidency. Biden’s rabid spending will not create jobs. It will continue to hike inflation, weaken the U.S. dollar, weaken Americans’ retirement accounts, and lead the Democrats to instinctively try to raise taxes. He is doing everything he possibly can to hamstring the economy and keep us in the pandemic depression.

Of course, the most recent and glaring example of Biden’s failure is his disastrous surrender and withdrawal from Afghanistan. His decision to pull all our military forces out and surrender our most effective evacuation facility (Bagram Airfield) before safely evacuating American civilians and civil servants is a quintessential example of how and why he is incapable of leading America. It forced Biden to then recommit twice as many American soldiers to the evacuation effort as were there before we left (and created a much more dangerous environment). On Thursday, we learned that suicide bombers killed more than 60 people, including 12 U.S. service members, and injured many more at the airport in Kabul. These are the first America service members to be killed by enemies in Afghanistan in the last 18 months. Biden’s failure in Afghanistan is now unfortunately deeply real to at least 12 more American families. He should be ashamed of himself.

10 – Failing to Surrender his Ego

The last and greatest of Biden’s failures is his inability to acknowledge his own incompetence. Throughout this process, I have been unable to find a single positive thing Biden has done for Americans. He continues to implement and impose his failures on our nation. It is costing Americans their jobs, their peace of mind, and now their lives. Again, I wonder: How much more of this can we take?