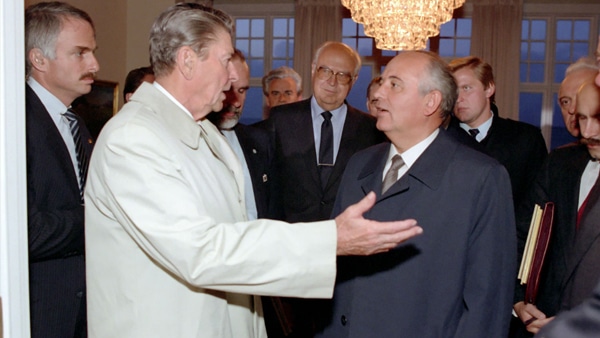 America needs a lot more of Reagan and Washington’s strength – and a lot less of Biden’s weakness.

In August 1980, when Ronald Reagan accepted the endorsement of the Veterans of Foreign Wars, he pledged to pursue a policy of “peace through strength.” Such a policy would, Reagan said, restore “a defense capability that provides a margin of safety for America.”

And that’s exactly what the 40th president did for the next eight years. He built a strong national defense, restored America’s reputation, and challenged America’s enemies abroad — not to wage war but to prevent it.

Indeed, Reagan’s approach brought about the end of the Cold War without one American soldier firing a shot at the Soviets.

No, Biden doesn’t seek war. Nor has he started any new ones (yet). But he clearly thinks strength provokes conflict and concessions promote peace. Ceding, in other words, is better than confronting. For evidence, look no further than the latest calamity in Afghanistan.

What’s so enraging about Biden’s refusal to extend his arbitrary deadline to leave Afghanistan past Aug. 31 is how easily he could’ve done it.

“We’re staying two weeks longer.” That’s all Biden needed to say. Or better yet: “Our operations to evacuate all Americans and allies who actively helped the U.S. military from Afghanistan will continue indefinitely until everyone is out.”

Instead, the last American troops left Afghanistan on Monday, as did the last evacuation flights from Kabul, the Afghan capital. An unknown number of Americans were left behind — perhaps hundreds — as were thousands of Afghans who assisted the U.S. or fought alongside Americans. Their fates are now in the Taliban’s blood-soaked hands.

The only things binding the U.S. to the Aug. 31 deadline were Biden’s own words — and the Taliban’s stern warnings.

“It’s a red line. President Biden announced that on ​Aug. 31 they would withdraw all their military forces. So, if they extend it, that means they are extending occupation while there is no need for that,” Taliban spokesman Suhail Shaheen told Sky News. “If the U.S. or U.K. were to seek additional time to continue evacuations — the answer is no. Or there would be consequences.”

The Taliban stared Biden right in the eyes, and Biden meekly looked away. The president just needed the tiniest bit of backbone. Instead, he chose to leave with his tail between his legs.

In short, our commander in chief humiliated the country for the world to see, allowing a band of killers who support al Qaeda and force underage girls to marry them to dictate terms to what is purportedly the world’s most powerful country.

But, as Biden said on Tuesday, his choices were total withdrawal or supposed escalation. This is of course wrong: Biden had several options in between. The point, though, is Biden opted to cede rather than confront, to accommodate rather than challenge. And he heralded his decision as a victory for peace over war.

Until war returns to Afghanistan. After all, the Taliban will, in time, impose its seventh century barbarism across the country and create a haven for terrorists. America may end up returning soon enough.

The debacle in Afghanistan is illustrative of a much larger problem: All experience has shown that weakness emboldens enemies. But even worse, it angers them.

In 1938, after British Prime Minister Neville Chamberlain infamously appeased Hitler by giving him the territory he wanted in Czechoslovakia in exchange for “peace,” Hitler said the next time he saw Chamberlain, he’d “kick him downstairs and jump on his stomach in front of photographers.”

Tyrants have contempt for more powerful actors that are afraid to exercise their power. They’re emboldened not only to push for more but also to crush the silly fool who didn’t show strength.

Today, Biden has surrendered to the jihadis on one of their most coveted battlefields. He’s also lifted sanctions on Iran without receiving anything in return. He effectively endorsed the building of the Nord Stream 2 pipeline, one of Russia’s top foreign policy priorities. And meanwhile, China feels emboldened enough to lecture America like a scolded child.

This is war through weakness: eroding deterrence and inviting conflict by consistently forsaking coercion and the efficacy of military power.

Peace doesn’t preserve itself. It requires the same things as war: planning, sacrifice, and expending resources. Such efforts include maintaining a strong military and a willingness to use it.

As President George Washington said, “To be prepared for war is one of the most effective means of preserving peace.”

President Reagan had the same message for the Veterans of Foreign Wars in 1980 — with some classic Reagan-esque cleverness.

“The great American humorist, Will Rogers, some years ago had an answer for those who believed that strength invited war,” Reagan said. “He said. ‘I’ve never seen anyone insult Jack Dempsey.'”

Dempsey was heavyweight champion of the world from 1919 until 1926.

America needs a lot more of Reagan and Washington’s strength – and a lot less of Biden’s weakness.