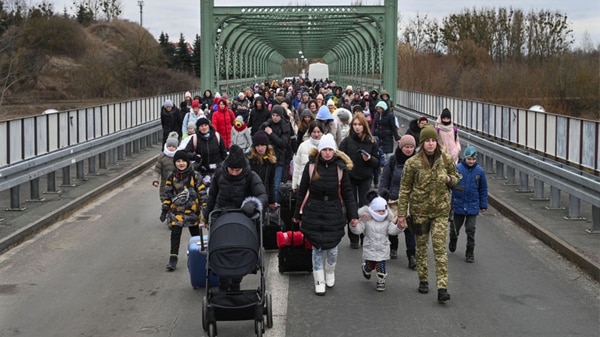 It has been just over two weeks since Russia’s invasion of Ukraine, but already, Europe is faced with an unprecedented refugee crisis.

As of March 11, the United Nations reported that more than 2.5 million people, nearly half of which are children, have fled Ukraine.  Additionally, an estimated 1 million people have been displaced from their homes within the country.

As this conflict continues, the United Nations High Commissioner for Refugees projects approximately 4 million people will have fled for their lives.  As James Elder, a spokesman for UNICEF said, “We’ve never faced a refugee crisis of this speed and scale.”

As this humanitarian catastrophe unfolds, personal accounts, images, and news stories have emerged showing the devastation of the Russian invasion alongside the determination of the Ukrainian people.

Many Ukrainians have stayed behind to defend their homes and way of life.  Writing for The Washington Post, Ukrainian journalist, Nataliya Gumenyuk described seeing ordinary citizens standing guard at checkpoints, staring down Russian troops, and dragging away Russian tanks.

Tragically, many of those who have remained on the frontlines in Ukraine have been separated from their families, who have fled to Poland, Hungary, Slovakia, Romania, and Moldova.

Ukrainians who are fighting, as well as those who have been forced to flee for their lives, have exhibited an immeasurable amount of bravery and valor.

However, the bottom line, as David Miliband, president and CEO of the International Rescue Committee, said is “They could be me or you.  These people are teachers, they’re journalists, they’re charity workers, they’re business people, they’re housewives. Refugees who are fleeing inside Ukraine and then crossing the border are just people.”

Many around the world, and especially those on the ground in Eastern Europe, have displayed exemplary courage in coming to the aid of the Ukrainian people.  Women religious, in particular, have been the silent heroes assisting refugees in the crossfire of the conflict.

For example, the Sisters of St. Joseph of Saint-Marc in Mukachevo, Ukraine have provided food and shelter for students and have helped them safely escape to nearby countries.

A medical student described how the sisters rescued him and his friends and said, “The sisters took us to their convent in their vehicles, hugged each of us with their love and warmth, gave us food, a warm hall to sleep in and escorted us in the morning to cross the Romania border.”

Additionally, Dominican Sisters from central Poland have established a humanitarian corridor that regularly transports trucks from Poland to Ukraine.  These brave women have taken action to bring much-needed food, water, equipment, and medicine to their neighbors in need.

Discussing the work of the sisters, Sister Tymoteusza said, “We load trucks of food and supplies, and a minivan always accompanies them – it has several seats.  They never go back empty. We take those that want to flee.”

These sisters, as well as the brave men and women fighting for Ukraine, are boldly defending freedom and human dignity.  Their determination and selfless acts defiantly stand in the way of Vladimir Putin’s success.

As we come together as Americans to stand in support of Ukraine alongside our partners and allies, we must remember to draw upon the courage of these heroes and honor their sacrifices.