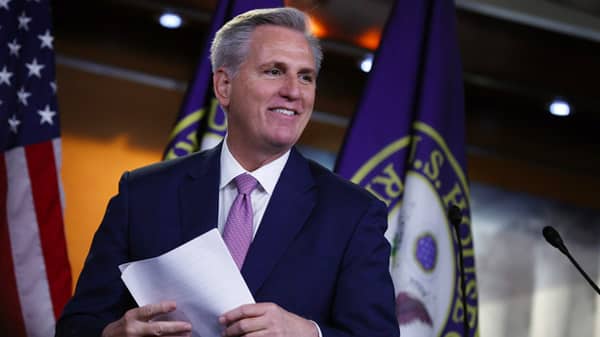 House Republicans are preparing to make history – fully as much as the Contract with America Republicans did in 1994.

With Leader Kevin McCarthy’s determined, methodical, and systematic leadership, House Republicans are preparing to make history – fully as much as the Contract with America Republicans did in 1994.

McCarthy and his team are developing a Commitment to America. Having participated with Ronald Reagan’s efforts in 1980, the 1994 Contract, and John Boehner’s successful 2010 campaign to retake the House, I can report that McCarthy’s effort is the largest, most inclusive, and most systematic issue development effort I have ever seen.

Leader McCarthy knows that this election, and the following two years as a majority, have a simple mission. In his words, it is “to save America.” The planning I watched while I visited the party’s annual policy retreat in Florida was being undertaken with this great challenge in mind.

If Boehner’s winning slogan was “where are the jobs?” the 2022 House Republican Party battle cry will be “we can’t afford it.”

The impact of gas prices – and even more the impact of rising food prices – will dominate the entire political discussion this year. The Biden administration’s policies, and the votes of House and Senate Democrats for those policies, have made it clearer to the American people that they can’t afford the Democrats. Every Republican House leader emphasized the centrality of the price increases in food – even more than gasoline – and their impact on minorities who are hit much harder than woke professionals with good incomes.

McCarthy, Whip Steve Scalise, House GOP Conference Chair Elise Stefanik, and National Republican Congressional Committee Chairman Tom Emmer all emphasized that this is a base broadening election. It is a unique once-in-a-lifetime opportunity to reach people who have never been Republican but find themselves in pain every week trying to make ends meet. They simply can’t afford the Democrats’ insane policies.

As an example of the momentum that Emmer and the NRCC are building, a new poll from New Jersey (hardly a red state) shows a 3 percent Republican lead on the generic ballot. Importantly, it reports a 19 percent lead among independent voters. In a state Joe Biden carried by 58-40, his job approval is now down by 8 percent among all voters and 33 percent among unaffiliated voters. Inflation and the cost of living are by far the biggest issues. Some 90 percent of voters agree that inflation must be solved. Republicans are trusted more on taxes (plus 16 percent), the economy and inflation (plus 13 percent), and crime (plus 12 percent).

It is clear the House Republicans want to build on the momentum and create a dramatic generational change. The top three Democrats in the House have a combined age that is 10 years longer than the length of time America has had a constitution. Nancy Pelosi is 82 on Saturday, Steny Hoyer is 82, and James Clyburn is 81. That’s an average of 82 years old and combined its 245 years – or back to 1777.

By contrast, the top three house Republicans total 150 years. McCarthy is 57, Scalise is 56 and Stefanik is 37. That’s an average age of 50 – which is 32 years younger than the Democrats.

Further, the Congressional Research Service reported in February that the average age of House members is 58. So, the Republican leadership is tracking eight years younger than Congress, while the Democrats are more than two decades older. So, a Republican House victory will be a genuine revolution in perspective and generational understanding of America.

This generational change was highlighted when Leader McCarthy took a group of Republican members to MIT for a short course on artificial intelligence and quantum behavior. They are talking with Cal Tech, Stanford, and other remarkable institutions about creating a series of House Republican learning experiences. They want to turn Republicans into the party of innovation and the party of the future.

McCarthy wants to focus on four major goals: Safe communities, a secure economy, success for our kids, and accountability in government. Following practical, common-sense conservatism that implements positive change to achieve those four goals will create a huge opportunity to recenter America away from Big Government Socialism and back toward a positive, problem-solving, effective self-government.

The new House Republican team is determined to replace Pelosi’s despotic perversion of the House of Representatives and turn it once again into the “people’s House.” You can expect bold dramatic changes toward a more open, citizen-friendly House from the first day the Republican majority takes control on Jan. 3, 2023.

I was honored to be invited to the Congressional Institute’s Issue Conference for the House Republicans. Leader McCarthy had asked me to be the keynote speaker for the first night of the three-day planning effort.

I emphasized that this was an American election, and we needed a commitment to all Americans – not just Republicans. I reminded them that in 1995 we averaged 63 Democrats voting for each of the Contract with America items. When the Welfare Reform Conference Report came to the floor – the largest conservative social reform of our lifetime – Democrats split 98 to 98 for and against the bill. I emphasized passing legislation with massive support from the American people – and working it through the committees to gain the support of Democrats when possible.

The Congressional Institute under President Mark Strand’s leadership did an excellent job of creating an event families could attend. It was fun watching Stefanik play with her 5-month-old son at dinner. The spouses really appreciated and enjoyed being invited as well.

On Wednesday afternoon, I heard briefings by pollsters, Dan Conston’s report on the American Action Network, the Congressional Leadership Fund, and an amazing report by Emmer.

Early voting begins 29 days before Election Day. I can hardly wait. Public disgust with the Biden-Kamala Harris-Pelosi-Chuck Schumer failures is so great we may well see an historic victory leading to the largest House GOP majority since 1920.

More importantly, it could be the largest American Majority our country has ever seen.