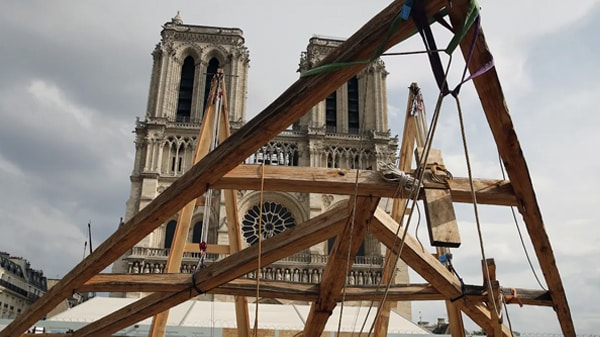 Just three years ago, a destructive and devastating fire erupted in one of the world’s most renowned and historic landmarks, the Notre Dame Cathedral. Millions watched in shock as the cathedral, a gothic architectural masterpiece, burned, and its iconic spire collapsed.

Since the foundation stone of the Notre Dame Cathedral was laid by Pope Alexander III in 1163, the cathedral has been at the heart of French culture, history, and pride.

The cathedral took nearly 200 years to complete, and as National Geographic described, “was the first grand masterpiece of a new French architecture – one in which pointed arches and flying buttresses allowed the walls to be soaring and thin, the windows to be enormous, and the light to flood in.”

Since its completion in 1345, Notre Dame Cathedral has served as the site of the crowning of Henry VI of England in 1431, Napoleon’s crowning as Emperor in 1804, and the beatification of Saint Joan of Arc by Pope Pius X in 1909.

Notre Dame Cathedral is also home to some of history’s priceless art, artifacts, and relics including the Crown of Thorns, the tunic of Saint Louis, the rose windows, and the Emmanuel bell.

The cathedral is a piece of living history, but, before the fire, for the 3,000 people who attended Mass on Sundays and the 10 million to 12 million annual visitors, Notre Dame served as a place to experience the mysteries and magnificence of Jesus Christ.

The significance of Notre Dame for people all around the world yielded an outpouring of international support to bring the cathedral back to life after the fire.

At least 840 million Euros (more than $880 million) have been raised to restore the cathedral to its “last known state” by the 2024 Summer Olympics, which will be hosted by France.

Although the fire was devastating, it could have been significantly worse. No historically significant or irreplaceable items were destroyed, and only a few glass pieces were missing from three small panels in the cathedral’s renowned stained-glass windows. According to the conservator responsible for Notre Dame, Marie-Hélène Didier, “It was a miracle.”

But there was serious damage. The spire collapsed entirely, fell through the nave, obliterated the flooring, and released lead into the cathedral. Some stone vaults were lost, and the roof and rafters were destroyed.

The reconstruction and restoration project – led by retired military General Louis Georgelin and architect Philippe Villeneuve – has encountered and overcome many challenges and setbacks.

Apart from COVID-19 shutdowns, the first two years were spent cleaning out debris from the fire and making sure the cathedral was structurally sound. While the safety of the building was still in question, the debris was carefully removed using remote-controlled robots and sorted by scientists for future study. The debris currently sits on 20-foot-high shelving and fills a 25,000-square-foot warehouse.

Braces also had to be installed on the buttresses and some of the vaults, because the walls were not secured without the roof and the timbers in place. An engineering study found that a 56-mile-per-hour wind gust could have caused them to fall over.

The “Forest,” or the oak frame that held up the 210-ton lead roof, was made up of 13,000 trees that were 300 to 400 years old. In the aftermath of the fire, some said the “Forest” could not be rebuilt in the same way because France did not have trees big enough, or old enough, to use.

But, by the spring of 2021, 1,000 indigenous oak trees were chosen to be used in the reconstructed spire and transept roof. With the help of 45 French sawmills, these trees were turned into timbers from September 2021 through January 2022. After the wood is dried and sorted, it will be assembled by carpenters on a trial basis and then will be assembled on-site in 2023.

Making all of this work even more difficult and dangerous, the lead that filled Notre Dame after the blaze introduced a host of safety challenges for workers that required increased precautions and slowed down progress.

Beginning in October 2021, teams of stonemasons, sculpture and fine art restorers, locksmiths, ironworkers, and carpenters have been working on cleaning the lead dust from 6,000 square meters on the inside of the Notre Dame Cathedral. Using small brushes and a vacuum backpack, these experts work centimeter by centimeter to remove lead dust from the walls, ceilings, vaults, floors, and stained-glass windows. The main organ is also having its 8,000 pipes cleaned of lead dust and is having its 19 windchests restored.

As French President Emmanuel Macron said, Notre Dame is “our history, our literature, our imagination… the epicenter of our life.” Although there is still more to be done, the progress that has been made on the reconstruction of the Notre Dame Cathedral thus far is encouraging, and worldwide support for this historic effort inspires hope for its success. In that sense, Macron was exactly right when he said, “This cathedral, we will rebuild it, all of us together.”