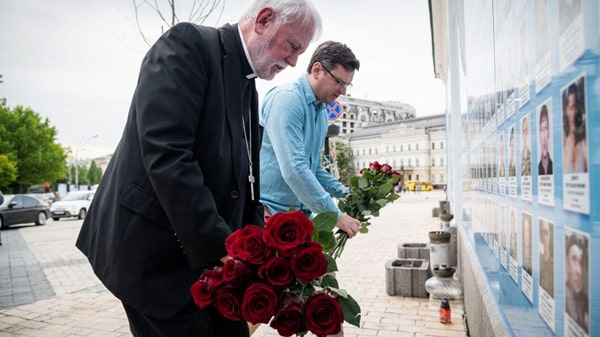 Archbishop Paul Richard Gallagher, the Vatican’s secretary for relations with states, recently embarked on a three-day mission to Ukraine. As Russia’s War on Ukraine continues, and as the Holy See and Ukraine mark the 30th anniversary of diplomatic relations this year, Archbishop Gallagher’s visit to the war-torn country came at a critical time.

The stated purpose of the mission was to “demonstrate the closeness” of Pope Francis and the Holy See to the people of Ukraine, and reaffirm “the importance of dialogue to restore peace.”

Underscoring Pope Francis’s commitment to peace and his solidarity with the people of Ukraine, Archbishop Gallagher was the third papal envoy sent to the region since Russia’s invasion on Feb. 24.

During his visit to Ukraine, which included stops in Lviv, Kyiv, Bucha, and other nearby war sites, Archbishop Gallagher met with government officials, church leaders, and refugees.

He first visited Lviv, a city that has taken in hundreds of thousands of refugees since the outbreak of the war and was the target of a missile strike last month that killed seven people. Archbishop Gallagher visited the Archbishop’s Residence, where he prayed for and blessed the people of Ukraine.

While speaking with Latin-rite Metropolitan Archbishop Mieczyslaw Mokrzycki of Lviv, Archbishop Gallagher said, “It’s a pleasure to pray with you and the Catholic people of this city, in the name of the Holy Father, and to offer a blessing upon the city and its population and upon Ukraine, and to pray for peace.”

Archbishop Gallagher also met with the Greek Catholic Metropolitan of Lviv and visited refugee centers at the parish of St. John Paul II and the Benedictine monastery in Solonetz, which had previously hosted more than 500 people.

His Excellency reflected on this experience in an interview with Vatican News during his trip saying, “I was very pleased to see how the Church has responded to this tremendous humanitarian crisis. It is a Church that identifies itself completely with its people and tries to respond to the needs, to help everyone, not only Catholics but also those of other religions.”

While meeting with government officials in Lviv and church leaders on the second day of his trip, Archbishop Gallagher expressed Pope Francis’s universal mission to seek the good of all, the Vatican’s commitment to Ukraine’s sovereignty and territorial integrity, and the Holy See’s solidarity with those who are suffering.

In stating the Holy See’s hope for peace and recognizing Ukraine’s authority to determine which actions and negotiations will bring about this desired end, Archbishop Gallagher said, “In our contacts with others, we have always said the Holy See remains completely committed to the territorial integrity of Ukraine. That is our bottom line.”

In Kyiv, Archbishop Gallagher met with his counterpart, Ukrainian Foreign Minister Dmytro Kuleba, to discuss the reinstitution of peace. Speaking after the meeting about the importance of dialogue in the peace process, Archbishop Gallagher said, “The Holy See reaffirms, as it has always done, its willingness to aid a genuine negotiating process, seeing it as the just route to a fair and permanent resolution.”

Archbishop Gallagher also visited Bucha, a city outside of Kyiv that had been ravaged by Russian forces. After the city was liberated by Ukrainian forces, horrific reports of killings, torture, looting, and rape, emerged. The bodies of civilians who had been murdered were found in streets, backyards, and in mass graves.

However, in the wake of so much destruction and devastation, Archbishop Gallagher found hope in the resilience of the Ukrainian people that he met.

“You can see the determination of the people to rebuild and to make a success of their country as it was before, and even better than it was before this tragic war started,” he said.

As Archbishop Gallagher made clear on his mission to Ukraine, the rebuilding of Ukraine and the restoration of peace will require the prayers and support of the international community.

Together, we must remain committed in our resolve to condemn unsolicited Russian aggression and to support freedom for the Ukrainian people.