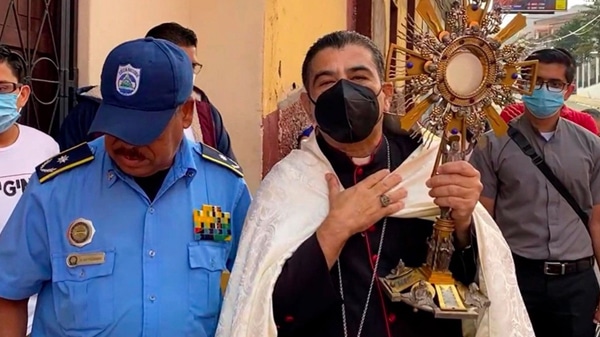 In the early morning hours of August 19, Nicaraguan authorities arrested Bishop Rolando Álvarez, claiming he participated in “destabilizing and provocative activities.” Bishop Álvarez was placed on house arrest while priests, seminarians, and a layperson were thrown into the infamous El Chipote prison, where numerous political and media figures are detained.

Responding to the escalating crisis in Nicaragua, Pope Francis said, “I am following closely, with concern and sorrow, the situation in Nicaragua, which involves both people and institutions.” The pontiff added, “I would like to express my conviction and my hope that, through open and sincere dialogue, the basis for a respectful and peaceful coexistence can still be found.”

For President Daniel Ortega and his wife, Vice President Rosario Murillo, religious freedom poses a significant threat to their grip on power. Nicaragua’s Catholics, which make up more than 50 percent of the country’s population, have been a strong force of resistance and, as a result, have been targeted for voicing their opposition to the authoritarian Ortega-Murillo regime.

In 2018, Nicaragua erupted in nationwide protests to oppose reforms to the public pension system, which were violently repressed by the Ortega-Murillo regime and left more than 300 people dead, approximately 2,000 injured, and 1,600 arrested. The Catholic clergy’s support for the protestors during the national crisis led to the persecution of clergy, worshipers, and Catholic organizations by the regime and its supporters.

As the U.S. Commission on International Religious Freedom concluded in its latest report, the targeting of Catholics by the Ortega regime has continued. While President Daniel Ortega was seeking his fourth consecutive term in the 2021 election, the regime disqualified or imprisoned opposition candidates, arrested journalists and human rights activists, and raided the last printed independent newspaper in the country, La Prensa.

But while the Nicaraguan Catholic Church called for free and fair elections and condemned the regime’s blatant violations against human rights, Ortega and Murillo called bishops “terrorists” and members of the clergy “sons of the devil.”

In response to what the State Department called the “sham election” that enabled the Ortega-Murillo regime to continue its oppressive rule, the U.S. issued sanctions and denounced the government’s attacks against democracy and human rights.

Tragically, these violations, particularly those targeting Nicaragua’s Catholics, have continued to escalate. As of July 20, the U.S. Department of State reported that, in 2022, the legal status of more than 800 nongovernmental organizations (NGOs) had been canceled by the Ortega-Murillo regime.

The Missionaries of Charity, a religious order established by Saint Teresa of Calcutta, was among the hundreds of charitable organizations forcibly closed by the regime. The sisters assisted the most vulnerable in Nicaragua. They sheltered abandoned or abused teenagers, ran a home for the elderly, as well as a daycare center for the poor, and instituted a school program to help at-risk students. Tragically, the government accused the sisters of failing to comply with the country’s strict and wide-reaching terrorism law, shut down their organization, and ordered their expulsion from Nicaragua.

As the sisters were expelled from the country in July, the independent newspaper, La Prensa, reported on their removal and faced retribution. The homes of two of La Prensa’s reporters were raided, and two drivers were arrested and taken to the El Chipote prison.

Weeks later, on August 1, seven Catholic radio stations were shut down, and on August 5, Bishop Álvarez was placed under police investigation for “organizing violent groups.” A prominent critic of the regime’s abuses, Álvarez has called for the release of nearly 200 political prisoners and for electoral reforms. But despite the challenges that Álvarez has faced, he said, “We have to respond to hate with love, despair with hope, and fear with the strength and courage given to us by the glorious and resurrected Christ.”

For weeks, Bishop Álvarez and a group of priests, seminarians, and lay people were confined to the bishop’s residence, and on August 19, the residence was raided by police. The Bishop was arrested and placed under house arrest in the capital, Managua, while the others were taken to El Chipote.

The Ortega-Murillo regime’s continued persecution of religious institutions is an affront to religious freedom in Nicaragua. This fundamental human right provides the foundation upon which societies thrive and is a bulwark against the forces of extremism and tyranny.

The Ortega-Murillo regime’s horrific atrocities targeting the Catholic Church in Nicaragua must cease.