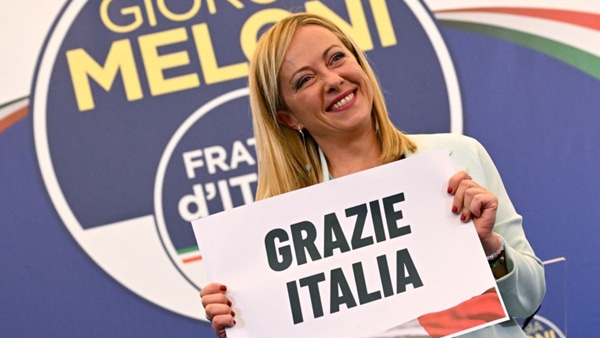 Meloni’s party, Fratelli d’Italia or Brothers of Italy, received more than 25 percent of the vote – up from just 4 percent in 2018. The Brothers of Italy are now joined by the League and Forza Italia, bringing the coalition’s vote share to nearly 44 percent.

By contrast, the party with the largest vote share in the 2018 election, the 5-Star Movement, saw its support cut in half, from nearly 33 percent to 15 percent.

This is an historic moment for Italy. Meloni, a Catholic mother, is poised to become Italy’s first female prime minister. In a 2019 viral speech, she proudly asserted, “I am a woman, I am a mother, I am Italian, I am a Christian, and you can’t take that away from me.”

Meloni’s coalition is the most conservative government chosen by voters to lead the country since World War II.

With record-high inflation, increasing energy costs, and a struggling economy, Meloni ran a campaign centered around the slogan, “Italy and Italians first!”

For the Italian people, Meloni’s victory was a rejection of policies that benefit “Brussels bureaucrats” over working-class people.

Yet, for the left-wing media, Meloni’s victory signaled a return to fascism that emerged in Italy in the 1920s under Benito Mussolini.  The New York Times, for example, referred to Meloni as “fascist” 28 times in one article.

Additionally, MSNBC host Joy Reid noted, “Meloni is the leader of the hard right Brothers of Italy, a party with roots in the post-war fascist Italian socialist movement.”

However, Meloni herself has denounced Italy’s fascist past, and stated in a campaign video, “The Italian Right has handed fascism over to history for decades now, unambiguously condemning the suppression of democracy and the ignominious anti-Jewish laws.”

But it wasn’t just Meloni who refuted these criticisms. Former Italian Prime Minister Matteo Renzi even admitted that there is no truth in the allegations that the newly elected coalition will revert Italy back to a post-World War I dictatorship.

Renzi said, “I’m not her best friend. We are rivals but she is not a danger to democracy. The idea there is a risk of fascism in Italy is absolutely fake news.”

The recent election results make clear that Italians want a country and a government that works for them.

This week’s election results ushered in a new era for Italy that will be shaped by a commitment to faith, family, and country. With Meloni’s historic victory, Italians have set a new course for their future.