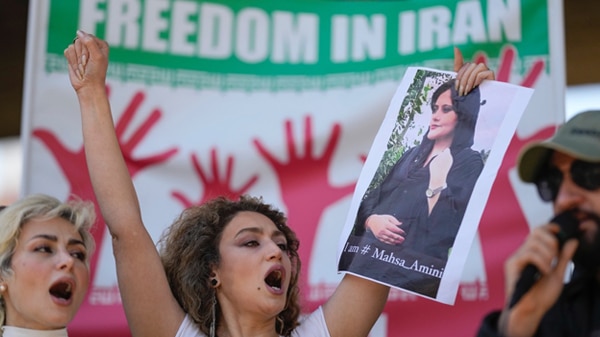 A women-led movement, years in the making, has reached a watershed moment in Iran.

In one of the most significant shows of opposition to the Islamic Republic in years – and the first of this scale led by women – people in cities across the country have taken to the streets to demand freedom.

The wave of protests began in mid-September, following the sudden death of a 22-year-old Iranian Kurdish woman, Mahsa Amini, while in police custody. While visiting Tehran with her family, Amini was arrested by Iran’s morality police for allegedly violating the country’s strict Islamic dress code laws.

This summer, hardline President Ebrahim Raisi announced further restrictions on women’s dress and ordered tougher enforcement of the so-called hijab laws, which, beginning at the age of nine, require women to cover their hair and wear loose clothing.

After being detained by the morality police for “inappropriate attire,” Amini fell into a coma and died on September 16.

Amini’s tragic death sparked outrage among Iranians from different social classes, ethnicities, and regions across the country. As Iranian-American journalist Farnaz Fassihi said, “Every woman in Iran sees themselves, or somebody they know, in Mahsa.”

As demonstrators have boldly chanted “Women, life, freedom,” and “Death to the dictator!” the regime has responded with deadly crackdowns against the Iranian people.

The Iranian regime is brazenly determined to put a stop to the international display of defiance against its rule. The regime has cut off the internet in parts of the country and blocked various social media platforms. Reports of the Iranian security forces using firearms, tear gas, and lead pellets have also emerged.

Some reports estimate that more than 200 people have been killed, thousands more have been arrested, and numerous school students have been taken to “psychological institutions” for “reform.” School-aged girls have joined the demonstrations and some – including Nika Shakarami and Sarina Esmailzadeh – have tragically lost their lives.

Additionally, wounded demonstrators refuse to go to the hospital out of fear of arrest and instead, choose to try to treat their injuries at home. Dr. Kayvan Mirhadi, an Iranian American and chief of internal medicine at the Clifton Spring Hospital in New York, receives hundreds of messages every day from demonstrators begging for medical advice.

This movement has been led by women and has been fueled by the bravery, determination, and sacrifice of the Iranian people. However, opposition to the regime’s brutality is not a recent development. For years, Iranians, particularly women, have been resisting the oppression and targeted discrimination of the dictatorship.

But, to the Iranian people, the compulsory hijab is a symbol of the regime’s control over the people.

As Iranian activist Masih Alinejad, who lives in exile in the United States, said, “The compulsory hijab is not just a small piece of cloth for Iranians. It’s like the Berlin Wall. … If women can successfully tear this wall down, the Islamic Republic won’t exist.”

The BBC interviewed an anonymous protestor in Tehran who agreed that the demonstrations are about “something much bigger” than whether women wear the hijab. The protests, he said, have “always been about basic human rights.”

“We want life, liberty, justice, accountability, freedom of choice and assembly, a free press. We want access to our basic human rights and an inclusive government that is actually elected by the people…that works for the people,” the protestor said.

For years, these aspirations have seemed out of reach for most Iranians. But now, the people of Iran have a real opportunity to enact meaningful change throughout the country — although success is not guaranteed, nor imminent.

Although the fight for freedom will be difficult and dangerous, widespread protests in Iran have demonstrated the Iranian people’s determination to secure basic human rights for all.