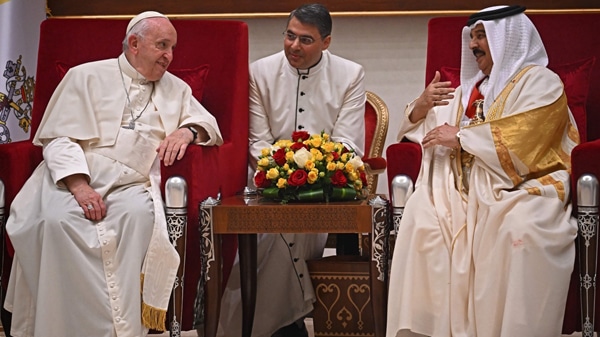 Beginning on Thursday, November 3, Pope Francis embarked on his 39th Apostolic Journey to the Kingdom of Bahrain as the first pontiff to visit the Gulf island nation.

During his visit, the Holy Father met with civil and religious leaders, attended the closing session of the Bahrain Forum for Dialogue, and brought encouragement to the nation’s small Catholic population.

Bahrain’s Christian community is predominately composed of non-citizens who are working in the country and approximately 80,000–161,000 Catholics who live there.

On Thursday, Pope Francis arrived in Bahrain and met with King Hamad bin Isa Al Khalifa at the Sakhir Royal Palace, as well as government authorities and diplomats. With a population that is nearly 70 percent Muslim, Pope Francis extolled Bahrain’s tradition of tolerance and highlighted that its constitution forbids religious discrimination.

Notably, Bahrain built the Gulf region’s first modern Catholic church, the Church of the Sacred Heart in 1939. Later, the Cathedral of Our Lady of Arabia was consecrated in 2021. With a capacity of 2,300, the Cathedral is the largest Catholic church in the region and was built on land gifted to the Catholic Church from King Hamad bin Isa Al Khalifa.

Currently, Bahrain faces sectarian strife among its predominantly Muslim population. Many have called on Pope Francis to raise the issue of imprisoned Shiite activists and prisoners on death row during his visit to the Sunni-led kingdom.

While addressing government authorities and diplomats at the Sakhir Royal Palace, the Holy Father emphasized that enforcing Bahrain’s constitution will ensure “that equal dignity and equal opportunities will be concretely recognized for each group and for every individual; that no forms of discrimination exist and that fundamental human rights are not violated but promoted.”

Pope Francis also said that the government must protect the right to life, and “need[s] to guarantee that right always, including for those being punished.”

Bahrain has one of the highest levels of immigration in the world. Foreign workers make up about half of the kingdom’s population and Pope Francis asked to “guarantee that working conditions everywhere are safe and dignified.”

The pontiff also encouraged Bahrain to be a “beacon through the region for the promotion of equal rights and improved conditions for workers, women and young people, while at the same time ensuring respect and concern for all those who feel most at the margins of society, such as immigrants and prisoners.”

On Friday, the pontiff attended the closing session of the “Bahrain Forum for Dialogue: East and West for Human Coexistence.” In his address, Pope Francis condemned war, advocated for true religious freedom, and discussed “urgent educational priorities,” specifically the recognition of women, the fundamental rights of children, and the concept of citizenship.

Speaking to the audience of religious representatives, the Holy Father said, “Religious leaders must surely commit themselves and set a good example. We have a specific role to play … It is our duty to encourage and assist our human family, interdependent yet at the same time disconnected, to sail the sea together.”

In the afternoon, Pope Francis met with the Grand Imam of Al-Azhar and the other members of the Muslim Council of Elders.

In his address, the Holy Father emphasized the importance of embracing fraternity, prayer, and common efforts to help humanity. He said that we “need to put a future of fraternity ahead of a past of antagonism, overcoming historical prejudices and misunderstandings in the name of the One who is the source of peace.”

Later on Friday, Pope Francis embraced the kingdom’s Catholic population and held an ecumenical meeting and prayer for peace in Our Lady of Arabia Cathedral.

On Saturday, the Holy Father will celebrate Mass at the Bahrain National Stadium and meet with young people at the Sacred Heart School.

Before departing on Sunday, Pope Francis will hold a prayer meeting and Angelus at the Sacred Heart Church.

The Holy Father’s visit to Bahrain has brought a message of hope and unity to its religious communities. Under the motto “Peace on earth to people of goodwill,” Pope Francis’s Apostolic Journey to the Kingdom of Bahrain has encouraged and advanced the causes of fraternity and peace.