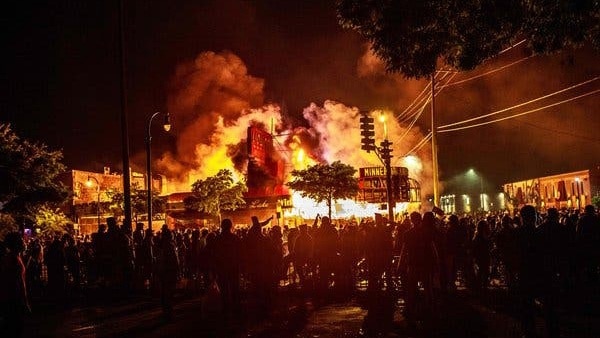 Rioters have violently hijacked peaceful protests nationwide over the killing of George Floyd by Minneapolis police. Attorney General William Barr issued a statement Saturday on the situation and specifically mentioned antifa, a “loosely-knit, interstate movement whose objective is to wage a terrorist war against the United States, using violence against the government and our civilian infrastructure.” Barr also mentioned that the Justice Department will take enforcement action. The laws already on the books are more than adequate to the task. We don’t need new laws. Calls to enact them are ill-advised. A Civil War-era statute that criminalizes “seditious conspiracy” and “targets conspiracies to levy war against the United States, or to forcibly oppose or overthrow our government” may be relevant here. The key is that the target must use or plan to use violence. Moreover, we can use federal racketeering laws to target those who “cross state lines or use interstate facilities in order to incite or participate in rioting.”

Members of Joe Biden’s campaign staff have made donations to a fund that pays bail fees for looters and rioters in Minnesota. These criminals are hurting innocent people and destroying the property of small businesses. – Newt

Campaign staff for presumptive Democratic presidential nominee Joe Biden are advertising their donations to a group that pays bail fees in Minneapolis after the city’s police jailed people who were protesting the killing of George Floyd. “At least 13 Biden campaign staff members posted on Twitter on Friday and Saturday that they made donations to the Minnesota Freedom Fund,” which uses donations to pay bail fees in Minneapolis. President Trump’s reelection campaign called the donations “disturbing,” noting that many of the protests have turned into violent riots. Biden’s campaign spokesman, Andrew Bates, said the former vice president opposes the institution of cash bail as a “modern day debtors prison.”

With Pelosi and the Democrats producing policies that run opposed to American values, it’s time for Republicans to run on a unified platform to take back the House in November. – Newt

In 2020, the GOP Should Bet the House
By Peter Roff
Newsweek

Republicans should run a unified campaign in 2020 not only to hold the White House and the Senate, but also to regain the House. Regaining the House is a daunting challenge for the GOP, but “thanks to Speaker Nancy Pelosi’s considerable overreach in the last coronavirus bill, Republicans now have a chance to make such a contrast.” The country is increasingly polarized, and Republicans can make that work to their benefit. The GOP can use Pelosi’ bill, which is full of “the kind of excess progressives generally favor, but which leaves most Americans probably thinking twice about voting for any member of Congress who supports it.” The GOP can create a contrast with the Democratic Party, focusing in part on fiscal sanity.

Saturday’s launch, supported by prior low-earth orbit missions and a public/private partnership, is a prelude to our return to the moon and beyond. – Newt

NASA: We’re Going Back to the Moon, and Beyond
By Jim Bridenstine
USA Today

In a historic mission, the US is launching NASA astronauts to the International Space Station on a commercial American rocket and spacecraft. “NASA is in this position today because of our early investments in an emerging space economy in low-Earth orbit, which started with innovative public/private partnerships for cargo resupply services and has grown to include commercial crew.” NASA also has a bold plan to explore more of the moon as the agency tries to lead in exploration for scientific discovery. NASA, industry, and the scientific community all have an interest in studying the moon and delivering new science and technology to the lunar surface. “With the right architecture, we will foster a new lunar economy.” Commercial robotic flights to the moon will begin next year, paving the way for humans to return in 2024. “From low-Earth orbit to our return to the moon, we are laying the foundation for humanity’s next giant leap, human exploration of Mars.”