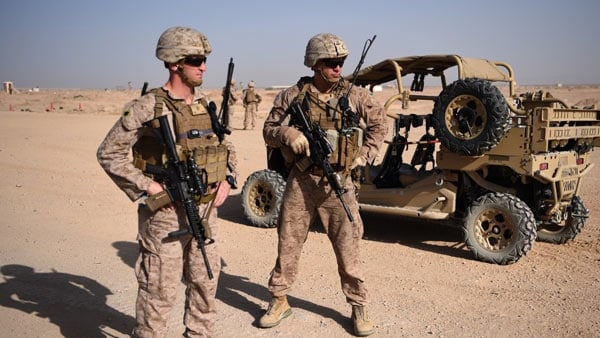 It’s been dismaying to watch the visceral, partisan reactions to reports that Russia offered bounties to the Taliban for targeting American troops in Afghanistan. Too many people, including journalists and politicians, are using the story either to attack or defend the Trump administration rather than focusing on how to respond to Russian aggression.

Of course, politics has never “stopped at the water’s edge,” despite the late Sen. Arthur Vandenberg’s famous plea to make foreign policy apolitical. But still, one would think — or at least hope — that news of a hostile foreign power paying Islamist insurgents to kill Americans would impel us to prioritize stopping and punishing the people behind the plot in a way that advances American national interests.

Instead, we’re prioritizing efforts to damage fellow Americans simply because they’re political opponents. Indeed, while some Republican senators are working to find the truth about the reports and determine how to retaliate against Moscow if necessary, many others are focusing more on defending the White House and attacking their domestic political foes.

The New York Times first reported that, according to anonymous American intelligence officials, a Russian military intelligence unit offered the bounties to Taliban-linked fighters. The report noted that President Trump was briefed on the matter earlier this year.

Naturally, Democrats, the media, and others are attacking the president for not doing enough to counter Russian belligerence and for supposedly being a stooge of Russian President Vladimir Putin.

Sen. Mark Warner (D-VA), for example, said the situation “raises enormous questions about why this administration continues to kowtow to Putin and Russia.”

House Speaker Nancy Pelosi (D-CA) expressed similar concerns. “With [President Trump], all roads lead to Putin,” she said. “I don’t know what the Russians have on the president politically, personally, financially, or whatever it is. But he wants to ignore, he wants to bring [Russia] back into the G8 despite the annexation of Crimea and the invasion of Ukraine, despite what they yielded to him in Syria, despite his intervention into our elections which is well documented by our intelligence community and despite possibly this allegation which we should have been briefed on.”

When the White House press secretary and director of national intelligence responded that, contrary to the Times’ report, neither President Trump nor Vice President Pence were briefed on the alleged bounties, the president’s critics altered their offensive (if they didn’t simply accuse the administration of lying). Instead of slamming the president for knowing about the intelligence and not acting, these voices insinuated that he’s so cozy with Russia that the intelligence community elected not to share the intelligence concerning Russian bounties with him.

Ironically, the same people decrying President Trump’s reaction to the reported Russian bounties are the ones who caused the most serious damage to America’s posture toward Russia. Indeed, those who obsessively pushed the false narrative that the president’s campaign colluded with Russia to interfere in the 2016 presidential election did two things: They numbed the country to any threats from Russia and politicized all discussions concerning Moscow to the point that we’re too divided on the issue to create effective policies.

Like the boy who cried wolf, people advocating the Russia collusion narrative beat Americans over the head with their stories so much that other Russian threats no longer resonate. Troubling news about Russia in general doesn’t have the sobering effect that it should on the American people and their representatives in Washington. Moreover, by pushing collusion to such a degree, the media and Democrats fostered a level of visceral partisanship concerning Russia that makes it much more difficult to counter Russian aggression. These are the greatest dangers — and ironies — of the Russia probe. The overwhelmingly unhelpful responses to the latest reports on Russian bounties reveal what the Russia probe has done to our national thinking about Moscow.

Regarding the bounties, we don’t know what’s true and who in the administration knew what when. If the last few years have taught us anything, it’s that press reports based on anonymous sources leaking sensitive information should be taken seriously but viewed skeptically. Sadly, we’ve seen too many examples of such stories being factually inaccurate and of experts, journalists, and politicians weaponizing the press to achieve political ends — namely, to hurt President Trump politically. Reporting the news is secondary at best in these cases. Governments can also lie about said reports, of course, but intelligence is tricky: It’s possible the intelligence community didn’t have enough consensus to bring evidence of the bounties to the president’s attention, or perhaps officials presented the information as not definitive. Or the information could have been forgotten amid other pressing matters. It’s irresponsible to state definitive conclusions about what happened and who’s to blame without sufficient facts.

Bounties or no bounties, all we can say for sure is that Russia is a capable and belligerent adversary that wishes America harm. But we’re focusing more on domestic, partisan bickering than addressing the Russian threat. The Russia probe played a major role in making this our unfortunate reality.

Our enemies can’t defeat us, but we sure can defeat ourselves. And having Americans fight each other for political reasons rather than hurt Russia for strategic reasons is a great way to help our enemies. If we can’t act like Russian military intelligence is a greater enemy than any Democrat or Republican, then we’re in trouble.