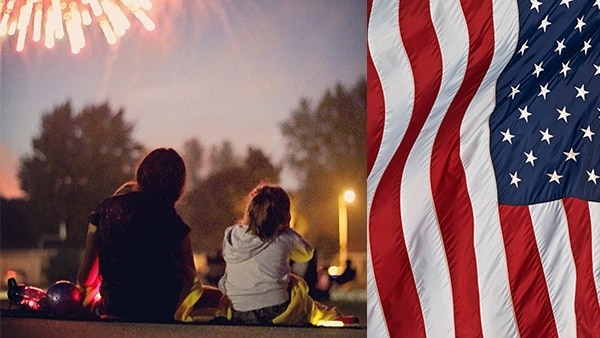 This is an important Fourth of July. This Fourth of July, we are beginning to learn once again why our national anthem proclaims America as “the land of the free and home of the brave.”

I first really focused on that phrase specifically in 1996 at the start of the Olympics in Atlanta. The choir at the opening ceremony sang it and then repeated it. I’d like you to now say it out loud to yourself twice — the land of the free and the home of the brave.

This year, we are being challenged, once again, to be brave if we want to remain free. The events of the last few months have made it clear that if we are not brave (and therefore unwilling to stand and fight when necessary) then we will not be free for much longer.

At a practical level, this anti-American force is assaulting our rights under the First Amendment. They are precisely the mob the Founding Fathers feared could topple our democratic republic. The videos of arrogant, dangerous mobs threatening people, while standing their private property, are videos of an anti-American force seeking change through intimidation and coercion.

The stated purpose of many of the organizations seeking to destroy traditional America are remarkably clear. The arrogance of ignorant ideologues lecturing the rest of us – holding our history in contempt, trying to destroy the memory of the great men and women who made America extraordinary – is a direct threat to the survival of our country.

The replacement of the news media with a propaganda media is a major part of the assault on America. For weeks, the propaganda media tried to convince us that violence was peace, looters and vandals were worthy of admiration, and the organizing elements of anarchy were too sincere to be examined or questioned.

In some of the more extreme cases, such as Portland and Seattle, Antifa built a base almost like a guerrilla movement preparing to directly challenge the survival of America.

Because the propaganda media is part of the effort, it cannot possibly cover the enemies of America with anything approaching objectivity. Black Lives Matter is a great slogan. However, the organization was founded by three Marxists who are dedicated to replacing America with a different system – which, among other things, seeks the destruction of the traditional nuclear family.

For too long, those of us who love America, deem it worthy of protecting, and believe it must be saved for the future of freedom on the planet have been quiet, reasonable, intimidated, and hiding.

President Abraham Lincoln (the Great Emancipator despite all the lies told about him by the Left) captured the essence of this struggle over the nature of America in his address at Gettysburg in November 1863. Lincoln reminded his audience, “Now we are engaged in a great civil war, testing whether that nation or any nation so conceived and so dedicated, can long endure.“

Today, I would replace “civil war” with “civic struggle,” but the meaning and the threat is the same.

Lincoln went on to assert:

“It is for us the living, rather, to be dedicated here to the unfinished work which they who fought here have thus far so nobly advanced. It is rather for us to be here dedicated to the great task remaining before us—that from these honored dead we take increased devotion to that cause for which they gave the last full measure of devotion—that we here highly resolve that these dead shall not have died in vain—that this nation, under God, shall have a new birth of freedom—and that government of the people, by the people, for the people, shall not perish from the earth.”

The next time you have someone bully you, try to intimidate you, or lecture you into believing radical anti-American ideology – or simply use falsehood to insult the spirit or memory of America – remember the words of Francis Scott Key and President Lincoln.

Key reminds us that freedom requires bravery. Lincoln called for us to resolve that all those who have died to preserve freedom in America shall not have died in vain.

America is under assault from a variety of forces desperate to replace the America that launched on July 4, 1776. We have tolerated the forces of ignorance, radical ideology, and anti-Americanism long enough.

It is time to reassert the rule of law, the spirit of America, and the potential of a genuine new birth of freedom. We must reject the rule of the mob and uphold government “of the people, by the people, and for the people.”

This is the cause to which we should dedicate this Fourth of July.