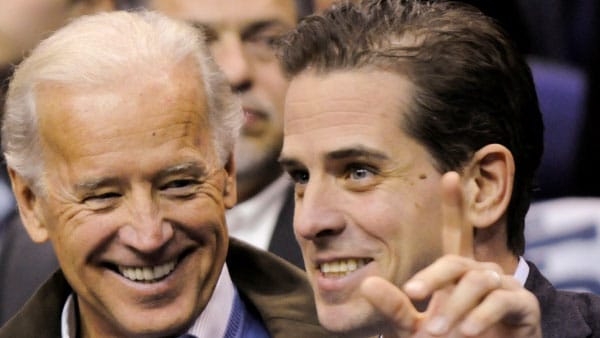 It is no secret that Democratic presidential nominee and former Vice President Joe Biden does not respond well to being questioned about his son’s dealings. In an appearance on NBC’s “Today” show in February, Biden was asked by co-host Savannah Guthrie about whether Hunter Biden should not have taken a position on the board of Ukrainian energy company, Burisma, as the company viewed his appointment as a means to get to then-Vice President Joe Biden.

In an uncharacteristically defensive response, Biden said, “Well, that’s not true. You’re saying things you do not know what you’re talking about.”

Earlier, at a Democratic primary town hall event for Biden, a man asked him why his son, Hunter, was working in an overseas gas company given that he knew nothing about the subject and whether the company had used Hunter to gain access to the US President.

“You’re a damn liar, man. That’s not true and no one has ever said that,” a rattled Biden responded, clearly furious.

Biden proceeded to call the man fat and challenge him to a push-up contest. Now, why would a man devoid of both mental acuity and physical virility get so offended by a question that he insults another man’s physique in response? After this week’s revelations, we may have an answer.

In a blockbuster report, The New York Post uncovered emails alleging that Hunter Biden had, in fact, introduced an advisor to the Burisma board, Vadym Pozharskyi, to his father. The reported email from Pozharskyi was sent on April 17, 2015, close to a year after Hunter had joined the board.

The email reads, “Dear Hunter, thank you for inviting me to DC and giving an opportunity to meet your father and spent [sic] some time together. It’s realty [sic] an honor and pleasure,”.

Make no mistake, if this correspondence is verified as accurate, it would mean that Joe Biden’s assertion that he had never spoken to his son regarding any overseas dealings is a blatant falsehood. Given the years spent by the mainstream media crafting elaborate conspiracy theories regarding how President Trump danced to the tune of Putin or other foreign actors, one would assume that this bombshell would pique their interest. However, such an assumption would be misguided.

One may reasonably argue in response that the lie in itself is a minor transgression and that a simple meeting does not suggest a quid pro quo was at play. In response to that contention, the New York Post includes another, more egregious, email from Pozharskyi in its story. In this email, Pozharskyi claims that the Ukrainian Ministry of the Interior was seeking obtain all documents concerning licenses issued since 2006 until now to the companies of Burisma’s holding. He also mentioned that the government was approaching all of Burisma’s partners, suppliers and clients in an attempt to dissuade them from doing business with the company.

“We urgently need your advice on how you could use your influence to convey a message / signal, etc. to stop what we consider to be politically motivated actions…,” Pozharskyi wrote to Hunter Biden.

If there was any doubt as to what “influence” the son of a sitting US Vice President enjoyed, it was cleared entirely when Joe Biden admitted to using American loan guarantees as leverage to dismiss a Ukrainian prosecutor investigating Burisma. Speaking at the Center for Foreign Relations, Biden said, “I looked at them [Ukrainian President Petro Poroshenko and Prime Minister Arseniy Yatsenyuk] and said: I’m leaving in six hours. If the prosecutor is not fired, you’re not getting the money,”

Joe Biden is not lying about this. The prosecutor did, indeed, get fired. After his inglorious dismissal, the former prosecutor Sholkin admitted that his plans had, in fact, included investigating and interrogating all members of Burisma’s board, including a certain Hunter Biden. If this is not a “smoking gun,” the phrase has no meaning.

Perhaps even more scandalous than the story itself, social media platforms have made it their chief objective to stop the spread of the article, including restricting the accounts of those who put it on their feeds.

On Wednesday, Twitter prevented people from tweeting out the link to the story while Facebook restricted the sharing feature for posts referencing the piece. As a result, White House Press Secretary Kayleigh McEnany was locked out of her Twitter account for tweeting out the story and the official Trump campaign account was locked for the same reason.

President Trump tweeted out a video referencing the article, only to have it blocked by the paragons of neutrality at Twitter HQ. Both Twitter and Facebook released the official explanations for their conduct. The former company said the article violated Twitter’s rules on published “hacked materials” while the latter stated that sharing the piece was restricted as long as it was in the process of being fact-checked.

Note that this standard was never applied to stories that referenced President Trump’s leaked tax returns that were published by The New York Times. Those materials too were never verified as accurate and their leaking constituted illegal activity.