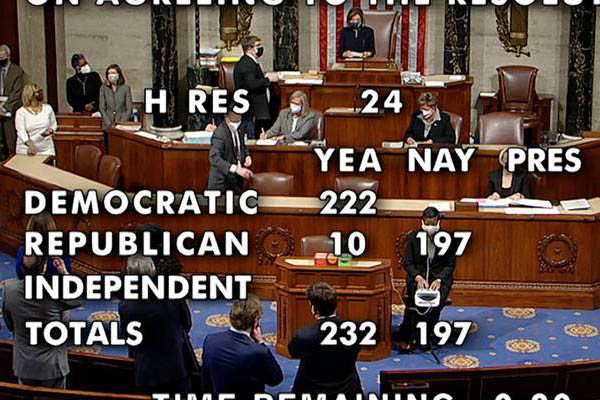 Various leftwing writers (some of them nominally Republican) have been salivating over the prospects of a GOP civil war.

Nothing would make them happier than the Republicans tearing themselves apart in a fight over President Donald Trump and the future of the GOP.

However, it will not happen.

It is a sign of how self-delusional the anti-Trump forces are that they could look at the House of Representatives vote on impeaching President Trump (the second one) and convince themselves this is the harbinger of a civil war.

Only in the delusional world of the left could a vote in which 197 people were on one side and only 10 people were on the other side be described as the beginning of a civil war.

In fact, a headline “Overwhelming House Republican vote against impeachment with tiny faction in favor” would be more accurate than the left’s efforts to fan the embers of a GOP civil war into a flame.

The gap between Washington’s left-wing delusional view of the world and reality was further emphasized in John Mclaughlin’s poll of voters in 17 swing states. Mclaughlin discovered that in these battleground states 80 percent of the Trump voters and 76 percent of all Republicans were less likely to vote for a congressional member who voted to impeach President Trump.

The rejection of the Pelosi vendetta against President Trump extended beyond the GOP in this battleground survey. This second impeachment was seen as a waste of time by 60 percent of the voters. In fact, 65 percent of all voters thought the Democrats were “making this worse and keeping the country divided.”

Almost three-quarters of Americans felt that Democratic efforts to try to impeach President Trump after he left office would be politically motivated to try to keep Trump from running again.

Despite the constant media attacks of the last two weeks, some 48 percent of all the voters said they were less likely to vote for a member of Congress who voted to impeach the president.

The left is using the attack on the Capitol (which I have consistently condemned and called for the perpetrators to be put in jail) as an excuse to try to destroy the conservative movement in America.

It is about to discover how powerful more than 74 million Americans can be.

The dramatic drop in stock prices for Twitter and Facebook (the companies have lost a combined $51 billion in market value after banning Trump) are early warnings that arrogant companies that think they can bully the American people may be running big financial risks.

If a conservative social media springs up, it will financially cripple the seemingly invulnerable internet giants, cost their founders a lot of money, and further drive the United States into a tribalized society in which the social media you use further defines who you are.

For the 74 million-plus Americans who voted for President Trump – despite four years of vilification and hatred from the left – it is more likely that they will learn to adopt the cultural-social tools which the left has been using rather than surrender and submit to a tyranny of left-wing bullies.

When Marriott announced it will cut off donations to pro-Trump Republicans, it risks 74 million Americans deciding to find somewhere else to stay. When Nike continues to use slave labor courtesy of the Chinese Communist dictatorship, it risks millions of Americans seeking an alternative shoe. When web-hosting platforms like Google, Amazon, and Apple conspire to apply ideological tests for the apps they carry, they may find they’ve created a niche for competition. The list goes on.

Any doubt conservative Americans had about the radicalism of the Democrats is being rapidly erased by the aggressiveness of their Washington behavior.

When Speaker Pelosi eliminated the House Republicans’ right to offer an amendment in the vote on House Rules – on the first day of the new Congress – every Republican understood it as a declaration of war on Kevin McCarthy and the leadership team that gained seats in 2020 when it was supposed to lose them. Pelosi and her leftwing allies know full well their power is tied to seven shaky seats. They also know that it is likely the Republicans will win the House in 2022. Their radical actions are in part a desperate effort to impose their ideology before they lose control.

When the House Democrats in their first vote on the House Rules eliminate mother, father, brother, sister and more than two dozen gender-specific words from the House Rules document, it is a sign of their commitment to a cultural radical left which does not represent most Americans.

Any tension within the Republican Party will rapidly be replaced by anger at left-wing Democratic efforts to bully, ostracize, intimidate, and – if necessary – jail those Americans who refuse to go along with their ideologically-driven reinterpretation of America. (Consider efforts in California and New York to lockup people who attend religious services in violation of selectively enforced COVID-19 restrictions).

The performance failures of the Democrats will rapidly replace any lingering anger at President Trump for most Americans. The 965,000-person spike in unemployment (well above the projected 800,000) is a warning that the Biden economy will find it impossible to match the Trump economy. The Biden announcement of a $1.9 trillion COVID-19 relief package is a further reminder of how deep our troubles are – both in health and in economic terms. The various conflict of interest stories surrounding a number of Biden nominees is a further reminder that the issue of Democratic Party corruption will not go away.

Any thought of a Republican civil war will rapidly be replaced by a conservative and moderate revulsion against the Democratic Party’s drive to the left – and desperate efforts to rig the game so they can’t lose future elections (I’m referring to the Democrats’ H.R. 1 and the drive to make Washington DC a state to gain two Democratic senators).

The supposed GOP civil war is wishful thinking by liberal elites in DC and the media – nothing more.