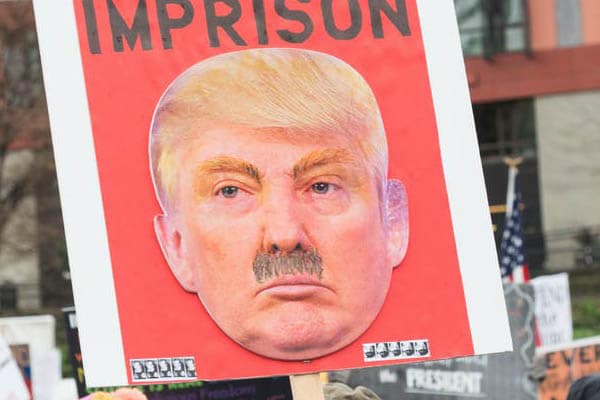 Americans are deeply divided. I know: Talk about stating the obvious.

Still, the fact is worth repeating, because political polarization is clearly eroding the health of our republic.

We’ve endured far worse — no, this isn’t like the lead-up to the Civil War. But the divisions we’re facing today between left and right are serious and risk making our nation’s future much bleaker.

Calls for unity from both sides of the political aisle are welcome but vague — and frankly, hackneyed. Consider me a cynic until I see words beyond platitudes and actions beyond mere gestures.

As with most things, it’s better to start small and build from there. So, let’s do that, focusing on something simple yet egregious for which both sides are guilty: invoking the Nazis and the Holocaust as a political cudgel without a moment’s hesitation.

Consider this the beginning of a handbook. How to begin unifying the country, step one: Stop comparing everything to the Holocaust and demonizing your political opponents as Nazis.

It has become common for leftists to wield the legacy of Hitler and Nazi Germany as a political weapon to bludgeon conservatives into submission.

Just this week, CNN host Don Lemon said that anyone who voted for President Trump is on the side of Nazis.

Such inflammatory rhetoric is routine. The media has regularly compared Trump to Hitler, claiming he’s turning America into a contemporary version of Nazi Germany.

The media isn’t alone. Attorneys general, senior Democrats in office, Joe Biden, various left-wing groups, and even some Republican Never Trumpers have all made the same comparison.

And don’t forget Arnold Schwarzenegger, who compared the storming of the Capitol on Jan. 6 to Kristallnacht, a pogrom carried out by Nazi forces and German civilians against Jews in November 1938.

On what’s known as the Night of Broken Glass, dozens of Jews were slaughtered. Tens of thousands more were deported to concentration camps. Hundreds killed themselves after the terror was done. More died later from maltreatment while arrested. Hundreds of synagogues were burned down. Thousands of Jewish businesses were destroyed. Countless Jewish homes were ransacked. Kristallnacht was the prelude to the Holocaust, a sign of what was to come: the Nazis’ genocidal effort to kill every Jew.

What happened at the Capitol was heinous and disgusting. It was not Kristallnacht.

Nor was Donald Trump’s presidency, which produced a booming economy, no new foreign wars, and more freedom for the American people across a range of domains. But none of that stopped CNN’s Christiane Amanpour from describing Trump’s time in the White House as a new Kristallnacht.

This is shameful — and false.

What’s so striking is how easily these voices make such comparisons — as if Hitler’s rise and rule were not unique, particularly horrible moments in history but rather events that happen every few years. How insulting to those who suffered under the Nazi regime.

Perhaps even worse, politicians and journalists could make the same point by invoking any dictator or authoritarian regime. But they choose the Nazis because they are the epitome of evil and Hitler because he’s history’s greatest villain.

Apparently, the Soviet Union and Stalin don’t quite make the cut for imposing sufficient totalitarian terror. That’s because people today find the feelings and images associated with the Holocaust — and therefore the Nazis — especially politically useful tools to tar the other side.

Yes, this should make you feel gross.

Of course, any comparisons of America to Nazi Germany and of Trump to Hitler are absurd. As conservative writer Jonah Goldberg likes to say, Hitler could have repealed Obamacare.

Moreover, an authoritarian regime doesn’t bother revising its executive actions when the courts strike them down, as the Trump administration did.

What I’ve described is not just a problem of the left, however.

As a conservative, I was deeply troubled to see others on the right recently invoke the Nazis’ genocidal persecution of Jews to describe things that are inconveniences by comparison.

Just in the past few days, Glenn Beck said that Big Tech banning President Trump from social media is like how the Nazis rounded up Jews and forced them to live in ghettos.

Yes, Facebook, Twitter, and other tech giants are egregiously trying to silence the political right. It’s terrible and must be countered. But, again, it’s not Kristallnacht.

Losing followers on Twitter is not the moral equivalent of Jews losing their lives. De–platforming a company is not the same as firebombing a Jewish business, sending the owner to a concentration camp, and killing his family.

We’re going through a tough time. In no way does any of it compare to Kristallnacht, the totalitarianism of Nazi Germany, or Hitler’s effort to exterminate Jewry.

Making such comparisons trivializes Hitler and the Holocaust. Indeed, doing so diminishes the Nazis’ crimes and what those who lived under Nazi rule endured. And doing so also undermines the lessons that we all should learn from the darkest chapter in human history.

Moreover, invoking the Nazis and the Holocaust with such ease and regularity risks erasing what really happened in Europe from 1933-1945, when Hitler was in power in Germany. The Nazis have almost become a caricature of evil in our culture rather than actually evil. We should all be disturbed by this.

Above all, comparing someone to the Nazis doesn’t just demonize them; it also effectively dehumanizes them. Throughout history, such demonization and dehumanization are an early, crucial step toward carrying out violence against one’s enemies. This is a dangerous road to be on.

There are many things that we can and should do to come together as Americans. For starters, how about we all stop with the Nazi comparisons?

For anyone who’s unwilling, I’d invite them to read about the standing cells at Auschwitz, tiny spaces less than one square yard where the Nazis forced four people who just worked a full day of hard labor to spend the night. Sitting was impossible, and the only source of air was a tiny opening — just enough to prevent the victims from suffocating. The punishment often lasted for several days or weeks.

Already starved and overworked, prisoners often died of exhaustion or went mad, forced to stand each night in the most claustrophobic of spaces while struggling each second to breathe.

If – may God forbid — that starts happening in America, then we can start with the Nazi comparisons. Until then, let’s do something concrete and constructive in the name of unity.