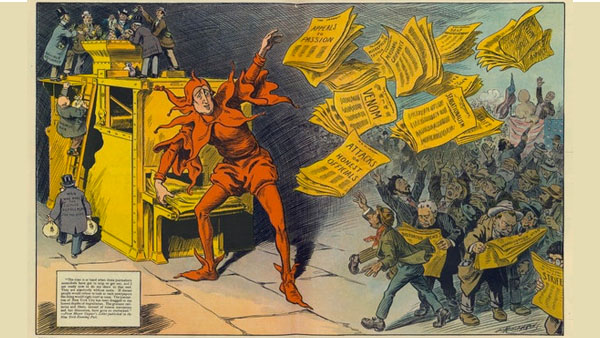 The mainstream media has come a long way since its inception. Nonetheless, America’s newsrooms are now back to their old sensationalist ways.

Throughout the early and mid-20th century, we might have given most editors a pass for their misprints, such as the Chicago Tribune’s epic 1948 Election Day blunder.

However, the media environment we face today is a completely different animal, akin more to yellow journalism of the late 19th century.

Reeling from its misfortunes at the onset of Donald Trump’s presidency, the mainstream media began to drift further away from reality. Reporters rebranded their biased commentary as “analysis,” trying to pass off their content as front-page, objective stories.

Four years later, we are witnessing a damaging phenomenon: American’s mainstream media suffers no real consequences for its growing malfeasance. This was on full display following the 2020 presidential election.

Casual onlookers would look and say the Post had found a smoking gun, voiding many of President Trump’s challenges to the 2020 election.

Indeed, just read how Amy Gardner, the author, originally began her story: “President Trump urged Georgia’s lead elections investigator to ‘find the fraud’ in a lengthy December phone call, saying the official would be a ‘national hero,’ according to an individual familiar with the call who spoke on the condition of anonymity because of the sensitivity of the conversation.”

However, as Hans von Spakovsky, a senior legal fellow at the Heritage Foundation, explained, the Post’s reporting was blatantly false.

Gardner’s unnamed source, later revealed to be Jordan Fuchs, deputy secretary of state of Georgia, inaccurately described President Trump’s conversation with Frances Watson, the lead election investigator. In a correction added on March 11, the Post stated that it “misquoted Trump’s comments on the call … Trump did not tell the investigator to ‘find the fraud’ or say she would be ‘a national hero’ if she did so.”

The beginning of the article was also rewritten.

“President Trump urged Georgia’s lead elections investigator to identify wrongdoing in the state’s vote in a December phone call, saying the official would be praised for doing so,” the updated version read.

In short, what would’ve once been a potentially career–ending scandal for a reporter is now just business as usual.

One could go on with examples.

The magazine subsequently issued a correction.

“This article’s headline originally stated that People of Praise inspired ‘The Handmaid’s Tale.’ The book’s author, Margaret Atwood, has never specifically mentioned the group as being the inspiration for her work … Newsweek regrets the error.”

Notice a trend? Strike while the iron is hot and worry about the facts later.

Perhaps the most blatant example of the media’s total detachment from reality emerged last week, after the medical examiner’s report on Capitol Police Officer Brian Sicknick’s death on Jan. 7 was released.

Officer Sicknick was defending the Capitol during the riot on Jan. 6. Initial police reports said that Officer Sicknick was physically injured while responding to the riot before coming back to his office later in the evening, collapsing, and being rushed to hospital, where he eventually “succumbed to his injuries.”

The mainstream media pounced on this narrative. The New York Times ran the following headline on Jan. 8: “He Dreamed of Being a Police Officer, Then Was Killed by a Pro-Trump Mob.”

The Times originally reported that “pro-Trump rioters attacked that citadel of democracy, overpowered Mr. Sicknick, 42, and struck him in the head with a fire extinguisher, according to two law enforcement officials. With a bloody gash in his head, Mr. Sicknick was rushed to the hospital and placed on life support. He died on Thursday evening.”

However, Officer Sicknick did not directly die of blunt force trauma or a chemical irritant, as some alleged. The medical examiner’s report revealed that the officer died of natural causes after suffering a stroke.

As the Wall Street Journal reported, “The office concluded that Mr. Sicknick’s manner of death was natural, adding in an explanation: ‘If death is hastened by an injury, the manner of death is not considered natural.’”

The title of the Times’ original article remains, but the introduction has largely been rewritten over the past few months.

As Newt noted recently, it took the DC medical examiner’s office over three months to determine Officer Sicknick’s cause of death.

“Why did it take over three months to determine how Officer Sicknick died?” Newt asked on Twitter. “This doesn’t make any sense. Only person killed January 6 was an unarmed woman killed by a policeman. Imagine media outcry if she had not been a Trump supporter. The media narrative has now collapsed.”

Furthermore, as Michael Brendan Dougherty observed in a recent National Review article, journalists had reason to be cautious in their reporting from the beginning but nonetheless jumped to conclusions.

“Why did people keep repeating that Sicknick had been bludgeoned to death for so long, despite the fact that there was enough reporting in the first two days after the riots to cast doubts on the story?” he wrote.

Since 2016, the mainstream media has drifted further into its own fantasy world. Decades earlier, when errors occurred, we may have given America’s newsrooms a pass. Today, however, the speedy, free, and open transfer of information through mass communication and social media limits the number of excuses writers have for peddling misinformation.

Words like “supposed” or “alleged” have disappeared from the pages of America’s leading news outlets. They’ve been replaced by hasty generalizations and logical fallacies.

Yellow journalism blossomed in the late 19th century. It has emerged once more.

“The views expressed in this article do not reflect the views of any person or institution other than the author.”