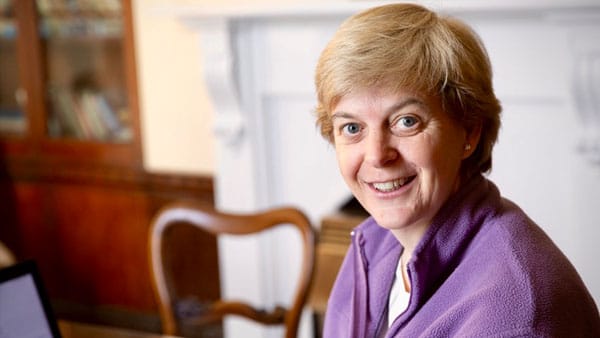 In South Sudan, a country besieged by civil war, insecurity, and starvation, Sister Orla Treacy bravely stands on the frontlines of conflict.  As the head of the Loreto Rumbek Mission and a recipient of the 2019 International Woman of Courage Award, Sister Orla oversees a primary school, a secondary boarding school, and a health care clinic in Maker Kuei.

Sister Orla joined the Loreto Sisters in 2006 and began to establish a new mission in South Sudan.  She arrived following a 22-year civil war and the signing of the Comprehensive Peace Agreement.  Sister Orla recalled President Salva Kiir Mayardit once saying that the task was not to rebuild South Sudan, as was the case in war-torn Syria or Afghanistan, but rather, to build it from the ground up.

In 2008, Sister Orla and the Loreto Sisters established a secondary school for girls, at which time 35 girls were enrolled.  The first year, nearly half of the students did not complete their academic year.  Tragically in South Sudan, young girls are often forced into marriage, making it difficult to complete their education.

Today more than 51 percent of women in South Sudan between the ages of 20-24 are married before they are 18, and nearly 66 percent of girls over the age of 15 are uneducated.

But these challenges did not dissuade Sister Orla.  Instead, she courageously worked to give girls in South Sudan an education and hope for the future.

Established in 2020, the Mary Ward Primary Health Care Clinic provides an average of 3,500 consultations per month.  It offers numerous services including maternal and well-baby care, sanitation and hygiene education, childhood immunizations, and counseling.

During the COVID-19 pandemic, graduates of Loreto Rumbek came back and worked with the health care clinic to educate the community about the coronavirus, hand washing, malaria, and malnutrition.

Sister Orla’s fierce dedication, strength, and resilience have empowered and delivered justice for women and girls in South Sudan.  With every lesson taught and diploma awarded, a community long ravaged by conflict and suffering is one step closer to peace.

Sister Orla Treacy is truly a woman of courage and a beacon of light in South Sudan.