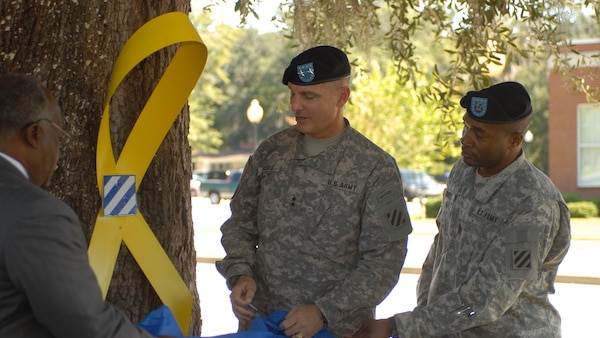 The abrupt conclusion to the chaos in Afghanistan has left many of us wondering how many Americans have been left stranded in the country. As our uncertain circumstances worsen, consider placing a yellow ribbon on a tree or a lamp post – a simple signals of support are needed at this time.

Last week, 13 service members, including 11 Marines, a Navy medic, and a member of the Army, lost their lives in the suicide bombing attack conducted by ISIS-K at an airport in Kabul. On Sunday, President Joe Biden landed at Dover Air Force Base to join the families of the 13 members who were killed. According to the New York Times, the men and women killed in this attack were the first American service members killed by hostile forces since March 2020.

Recent news has been devastating for former service members and their families as the Biden administration keeps failing to gain control over the situation in Afghanistan. The reality is that there are Americans who are in danger each day. On Monday, the Pentagon announced that all U.S troops have departed Afghanistan in order to meet the Aug. 31 deadline set by the Biden administration and the Taliban. On Aug. 30, the final U.S. aircraft departed Kabul, ending the United States’ 20-year presence in Afghanistan.

With this abrupt conclusion people are left wondering how many Americans have been left behind. White House Press Secretary Jen Psaki said a “small number” of Americans remain in the country, while the State Department said the number was “below 250,” according to Fox News. CENTCOM Commander, Gen. Kenneth McKenzie said “There’s a lot of heartbreak associated with this departure.” He said, “We did not get everybody out that we wanted to get out.”

The Biden administration is failing Americans and our allies. In an interview with George Stephanopoulos Stephanopoulos asked the President “if you know you’re gonna have to leave eventually, why not have th—everything in place to make sure Americans could get out, to make sure our Afghan allies get out, so we don’t have these chaotic scenes in Kabul?” The President stammered through his reply.

While the Biden team declares the mission accomplished, Americans and our allies are left only with thoughts and prayers for those stranded in Afghanistan. As the White House retreats, it is time for Americans to support those who were left behind.

In 1979, 52 Americans were taken hostage by Iranians and held captive for 444 days. During this time of national panic and abandonment from President Jimmy Carter, Americans worked constructively to show support and solidarity for the captured Americans by tying yellow ribbons around trees and lamp posts. The yellow ribbon served as a symbol of hope for a safe return of the troops and as a reminder that Americans overseas were not abandoned.

Based on the Tony Orlando and Dawn song from the 1970s, “Tie a Yellow Ribbon Round the Ole Oak Tree,” Americans were reminded of the hope and anticipation of loved ones returning home. Again in 1991, during the Gulf War, neighborhoods were filled with trees and lamp posts covered in yellow ribbons. Wives and mothers wore yellow ribbons on their clothing or in their hair. This national support became a cultural movement: a sign that America does not turn its back on its troops.

It is time to bring back the yellow ribbon. The American people must send a message of support to our loved ones overseas. As the Biden administration dodges interview questions, Americans (civilians and service members) and Afghans are being tortured, persecuted, and killed.

The United States must show strength and resilience. This must start at home. Our strength is not shown through President Biden, it is shown through the support of our communities and the reminders we may wear on our clothing. As our uncertain circumstances worsen, consider placing a yellow ribbon on a tree or a lamp post – simple signals of support are needed at this dark time.