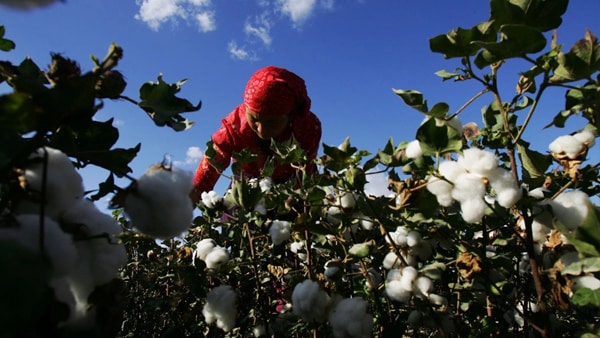 In recent years, the Chinese Communist Party has waged a campaign of persecution to eradicate the cultural and religious identity of Muslim Uyghurs and other religious and ethnic minorities in Xinjiang.

Under the patently false pretext of “eliminating terrorism,” the CCP has forced Uyghurs into a torturous, inhumane system of state sponsored slavery and concentration camps.  In addition, the Uyghurs have been subjected to political indoctrination, forced sterilization, and invasive surveillance.

In January 2021, former Secretary of State Mike Pompeo determined that genocide and crimes against humanity were being perpetrated in Xinjiang.  The Biden administration later upheld this determination.  Despite international condemnation, however, the CCP continues its campaign of persecution and repression.

As the scale and severity of abuse prevail, it has become evident that the Chinese Communist Party is also profiting from its virulent and oppressive atrocities in Xinjiang.

The Uyghur Human Rights Project reports that Chinese authorities have confiscated and sold assets belonging to imprisoned Uyghurs.  At least 150 assets, amounting to $84.8 million, have been listed on e-commerce sites by Xinjiang courts since 2019.  The assets were seized from at least 21 individuals resulting from charges related to “terrorism” or “extremism.”

According to the Wall Street Journal, asset seizure is part of the Chinese Communist Party’s broader persecution campaign to destroy Uyghur businesses, personal wealth, and livelihoods.  As Bill Browder, Head of the Global Magnitsky Justice Campaign said, “This is exactly what the Nazis did to the Jews in Europe.”

In addition to the CCP profiting from the sale of prisoners’ assets, the Party has created a system that allows corporations, including state-owned enterprises, to exploit and profit from the Xinjiang genocide.

Forced labor is a form of human trafficking, which in Xinjiang, is sanctioned and systematized by the Chinese Communist Party.  The U.S. State Department’s Office to Monitor and Combat Trafficking in Persons has stated that, in the internment camps, “authorities use threats of physical violence, forcible drug intake, physical and sexual abuse, and torture to force detainees to work in adjacent or off-site factories or worksites” to produce goods such as garments, electronics, and pharmaceuticals.

Additionally, as part of a so-called “poverty-alleviation” program, laborers from Xinjiang have been transferred to other parts of China for servitude.  Local governments and companies in turn receive government subsidies for participating in this illicit initiative.  Between 2017 and 2019, over 80,000 Uyghurs were estimated to have been transported out of Xinjiang and forced to work in factories in other parts of China.

Goods and materials sourced from Xinjiang, produced using slave labor, and shipped internationally have been identified as a significant area of concern.  The United States has been working to prevent such goods from entering American markets.

Specifically, cotton has been historically sourced from Xinjiang using slave labor.  According to a December 2020 report by the world’s foremost expert on atrocities in Xinjiang, Adrian Zenz, “The evidence shows that in 2018, three Uyghur regions alone mobilized at least 570,000 persons into cotton-picking operations through the government’s coercive labor training and transfer scheme.”

Before leaving office, President Donald Trump imposed a ban on all cotton products from Xinjiang, which supplies 20 percent of the world’s cotton.  Over the last eight months, this ban has been incredibly impactful and remains in place today.

The United States must continue to expose the horrific realities of the CCP’s human rights abuses.  As the world’s leading defender of freedom, the United States must firmly commit to holding accountable those responsible for the persecution of Uyghurs and other religious and ethnic minorities.