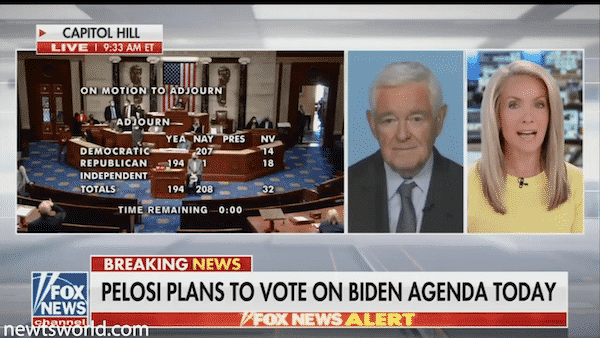 Newt talks machine politics from the Democrats, the Pelosi dictatorship, and how the left’s actions are an insult to democracy.

Of course, they don’t know what they’ll vote on it. This is a dictatorship it was a dictatorship in 2009 and a year later they lost 64 seats. So, we’re seeing a replay of this. I would just say no Republican should vote for anything today in the Pelosi dictatorship. And if any Republican does vote with Pelosi, they should assume there will be a primary opponent campaigning against them as a Pelosi Republican. This is an absurdity, it’s an insult to the country, it’s an insult to the whole constitutional process. To ram a bill through that hasn’t been scored hasn’t been read, nobody has the clue what they are doing is the essence of a machine. And Pelosi is the most powerful dictator I think to ever sit in the speaker’s chair. But that’s what this is. This isn’t the congress; this isn’t the traditional house; this is a petty dictatorship run by somebody who is determined to get what she wants no matter what. The country has voted consistently on Tuesday against this very kind of thing. I think any Democrat who is in a marginal district and that’s probably 70 or 80 Democrats. If any of them vote for this, they are just I think voting to retire.

I think anybody who votes with Pelosi today when she is running a dictatorship should understand the whole deal was you vote for the infrastructure bill, you enable the Democrats then to vote for the other bill. If the infrastructure bill doesn’t pass the other bill won’t pass. This is all a cynical machine politics deal, and no Republican should side with the machine. This is the last stand of the left. I think it’s crazy. New York State they had three different referenda trying to change the election law toward hr1 and every single one, 63% of New Yorkers voted no. That was Tuesday. You are seeing over and over again the defeat of the state senate president in New Jersey by a guy who spent $153. The country’s trying to send a signal to Washington.

Look, I think they are exactly like the brown shirts in Italy and Germany and 30s and late 20s. Like the soviets in 1917, like the Maoists in the 1950s. These are totalitarians. They are saying I’m going to come after you. I think Sinema and Manchin ought to switch parties and say you we got it don’t like us or want us, goodbye. This stuff is crazy and also as you know in the case of Rand Paul, I think he had six ribs broken by a crowd that attacked he and his wife. So, I think there — we ought to look at this and realize this is dangerous stuff.