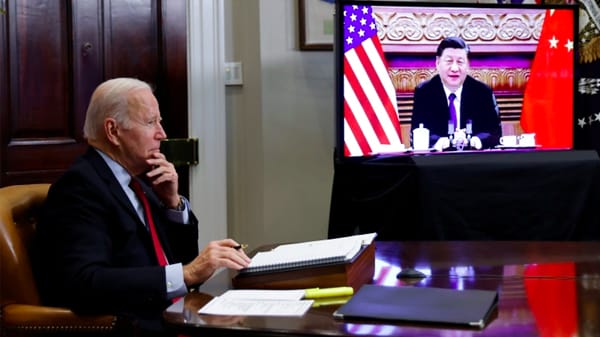 The Biden administration is content to remain in a fantasy land where China is a responsible partner. Americans deserve leaders who prioritize values over political wins and who make the right choices when faced with tough decisions.

On Monday night, President Joe Biden and General Secretary Xi Jinping had a more than three-hour virtual meeting in an attempt to mitigate the rising tensions between the U.S. and Communist China. During the call, Biden told Xi that addressing climate change would be distinct from dealing with other areas of concern, such as trade, human rights, and security policy.

We’ve seen this before. And it didn’t work out well the first time.

The only other time that tensions between the U.S. and Communist China were this high was after the 1989 Tiananmen Square massacre, when the Chinese Communist Party sent in troops to brutally murder students and pro-democracy demonstrators in the heart of Beijing. In 1994, President Bill Clinton decoupled the issues of human rights and trade saying that relations with Communist China need to be seen with a “broader context.” Clinton’s prioritization of trade over human rights led to a renewal of China’s most-favored-nation trade status and eventually paved the way for the China’s entry into the World Trade Organization.

The recent COP26 summit in Glasgow was yet another example of how disillusioned the Biden administration is in dealing with Communist China.

While Joe Biden was literally falling asleep at the summit, General Secretary Xi was back in China solidifying his grip on power during a meeting of Chinese Communist Party officials which elevated him to the same status as Mao Zedong and Deng Xiaoping.

Meanwhile in Glasgow, Climate Envoy John Kerry was all too happy to tout an agreement with Communist China to “enhance climate action.” But this agreement didn’t come without hidden costs and concessions.

According to Sen. Marco Rubio, Kerry has been “actively working against” the bipartisan Uyghur Forced Labor Act. The bill passed the Senate in July and would prohibit goods made with forced labor from being imported into the United States.

Almost 40 percent of the global polysilicon supply, a material in solar panels, comes from Xinjiang, where the Chinese Communist Party is committing genocide against Uyghurs and other religious and ethnic minorities. A Horizon Advisory report also revealed that within Xinjiang’s major solar companies, there are indicators of forced labor practices. Such practices include government-facilitated work transfers and forced “military-style training.” Additionally, the world’s largest solar panel maker, China’s Longi Green Energy Technology Co, had its shipments recently detained due to concerns regarding human rights violations.

Regarding the supposed trade off between the genocide in Xinjiang and climate change, Kerry has said, “Life is always full of tough choices.” Clearly, his choice has been made and can be assumed to have been made easier by the fact that his family has “‘at least $1 million’ in a hedge fund that specializes in private partnerships and investments with Chinese government-controlled funds.”

But Kerry defended his positions on the basis that the U.S. and China ought to cooperate “based on the science.” But the last time the United States worked with the Chinese Communist Party “based on the science,” the Chinese Communist Party covered up the outbreak of COVID-19 that led to a global pandemic, and then refused to cooperate with scientists to identify the origin of the virus.

The bottom line is that General Secretary Xi and the Chinese Communist Party will always act in their own interest to advance the party’s power. History has shown this time and time again, and it shouldn’t come as a surprise.

However, the Biden administration is content to remain in a fantasy land where China is a responsible partner and will abide by the “climate action” agreement that Kerry has claimed is “bigger than people think.”

Americans deserve leaders who prioritize values over political wins and who, when faced with tough decisions, make the right choices.