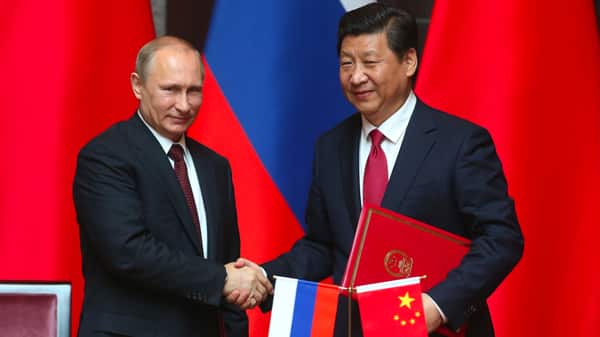 The United States is confronting a pair of ruthless dictatorships in two potential collisions that could change history and leave Americans at enormous risk. The simple fact is Putin and Xi sense real weakness in the American commander in chief.

The United States is confronting a pair of ruthless dictatorships in two potential collisions that could change history and leave Americans at enormous risk.

The news media focus is currently on Vladimir Putin and his threat to occupy part or all of Ukraine. Everyone recognizes that President Joe Biden made a dangerous mistake in his two-hour press conference when he said “a minor incursion” by Russia into Ukraine might be acceptable. His administration was trying to reverse that comment as soon as the press conference ended and spent the next two days trying to reassure everyone – including our allies – that Biden did not mean what he clearly said.

Of course, the Biden threat that there would be “severe sanctions” if Russia invaded Ukraine probably has no effect on Putin. First, when he seized all of Crimea the Obama-Biden administration threatened severe sanctions and nothing seemed to hurt Russia much. Second, at a time when Biden’s war on American energy has raised the price of oil and forced him to beg Russia and Saudi Arabia increase production to lower the price, Putin must be reveling in the absurdity of Biden’s words versus Biden’s actions.

Oil is the largest source of foreign income for Russia. Every dollar per barrel increase is a windfall Putin can spend on the Russian military and foreign adventures. In October 2020, with President Donald Trump’s energy independence policy, the price of crude was $39.90 a barrel. Today, with Biden’s anti-American energy policy, the price of crude has jumped to $85.43 a barrel.

So, despite Biden’s strong words about sanctions, the effect of his policies has been a $45.53 a barrel increase in profit (or 114.11 percent) for Putin to pay off his oligarchs, buy better military equipment, and engage in foreign adventures. Any supposed sanctions Biden imposed would have to overcome this windfall – and then go much deeper – for Putin to even feel it.

Far from being intimidated, the Russians have announced that they will be holding military maneuvers off Ireland. That country has complained and said they don’t want Russian warships in their neighborhood. Since Ireland is not a member of NATO, and its own forces are totally inadequate for dealing with Russia, NATO would have to get involved if there was a serious incident.

Meanwhile, while Putin is keeping everyone focused on Ukraine, Xi Jinping is busy putting pressure on Taiwan. Last Sunday, the Chinese Communists flew 39 aircraft – including a nuclear bomber – near Taiwan.

The simple fact is Putin and Xi sense real weakness in the American commander in chief. They sense that American confusion and weakness is an enormous opportunity.

While Biden has a difficult time communicating with his allies – and has had no impact on Germany which is now choosing Russian natural gas over NATO – Putin and Xi are talking regularly and coordinating activities.

Currently, we do not have one. Biden is incapable of filling Washington’s shoes.

I was reminded of how dangerous this is when Callista and I watched a movie, “Munich: The Edge of War.” It is a clever treatment of the Munich meeting between Adolf Hitler and British Prime Minister Neville Chamberlain in which Chamberlain gave away Czechoslovakia in order to buy what he called “peace for our time.”

Before Munich, in a radio broadcast to the British people, Chamberlain had described the German-Czechoslovakian crisis as “a quarrel in a far away country between people of whom we know nothing.”

On learning that Chamberlain had sold out the free country of Czechoslovakia – leaving it defenseless against the German dictatorship – Winston Churchill warned: “You were given the choice between war and dishonour. You chose dishonour and you will have war.”

Weakness when facing dictators is always dangerous. The situations in Ukraine and Taiwan are both dangerous. Our commander in chief appears incapable of meeting the dual challenge.

These are very dangerous times.