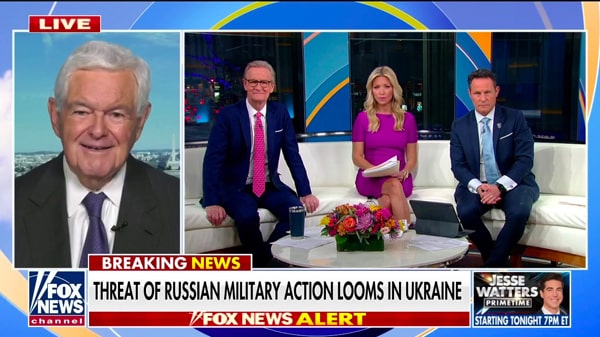 Newt discusses President Biden’s positions on a possible invasion of Ukraine by Russia.

Well, I think probably as much as any one person. Remember, Biden has very limited energy levels, so if he does a two-hour press conference my guess is it took most of his energy for three or four days. The amount of information he is going to receive is going to be very, very limited. Maybe the most limited of any modern president. So other people have to keep the game going forward. And I think you see this happening again and again. He is, I think, on the really big decisions he probably plays a major role, but my sense is that he actually knows less about his own government and knows less about what is going on around the world than most presidents in my lifetime.

Well, first of all, the Obama Biden administration were going to put sanctions on after Putin seized Crimea. I don’t think that had any effect at all. In fact, if anything, they convinced Putin that he could ignore those kind of threats. Putin now controls Germany because they made a series of bad decisions as a result of which the German economy has to have Russian natural gas. The Germans would be going into a cold winter collapsing economically and collapsing in quality of life if the Russians actually cut did off. So, the Germans are very much against NATO taking too strong a role. Meanwhile the Russians have sort of expanded the playing field. They have now announced that they want to have military maneuvers off of Ireland which the Irish have protested about. At the same time, their ally, China is flying 23 aircraft over Taiwan. And I think everybody is watching to see what the United States does. If we flinch, and if we convince the dictators that we can be pushed around, they are going to push very hard because Biden may be a once in a lifetime opportunity to rip off our allies and have nothing done. And I think it’s very, very dangerous.

Well, yeah, if in fact this morning’s reports are right and we actually move troops into eastern Europe and if we continue the training program and weapon equipment program in Ukraine, ironically, Biden will have gone from trying to conciliate into a much harder position than he ever intended.