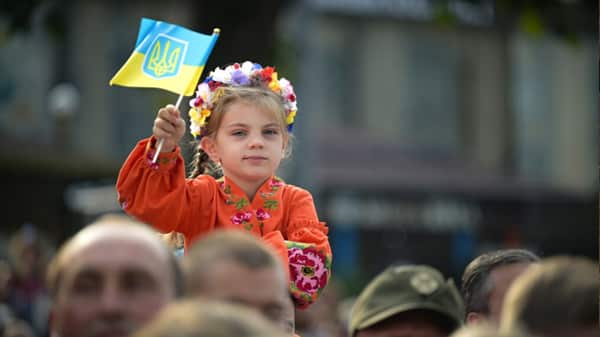 On Thursday, Newt and I had the distinct honor of speaking at the Ronald Reagan Presidential Library and Museum.  The library has an important mission – to preserve and honor the memory of President Reagan by educating generations of Americans about the historic impact of the Reagan administration.

The visit to the Reagan Library – less than 24 hours after Russia launched the largest land, sea, and air attack on a European state since World War II – brought to mind the immense challenges that President Reagan faced as he took office at the height of the Cold War.  It also was a reminder of the significance of his relationship with Saint John Paul II that led to the collapse of the Soviet Union.

In June of 1979, Pope John Paul II embarked on an historic nine-day pilgrimage to his native Poland.  While there, the Polish pontiff delivered a message of truth, faith, and freedom that was a source of strength and hope for millions of Poles and people throughout eastern Europe who were suffering under the Soviet regime.  Nearly one-third of the Polish people turned out to see Pope John Paul II, while the rest of Poland and the world followed his calls for liberation on television and radio.

On his first day in Warsaw, the Holy Father declared, “There can be no just Europe without the independence of Poland marked on its map!”

The Pope’s bold message was heard across the world and, notably, by a future U.S. president in California.  At the time of Pope John Paul II’s pilgrimage to Poland, Ronald Reagan was hosting a popular radio show that dedicated numerous broadcasts to coverage of the Holy Father’s historic trip.

During one broadcast, Reagan said, “It has been a long time since we’ve seen a leader of such courage and uncompromising dedication to simple morality.”

President Reagan was elated.  He grabbed the pontiff’s hand and stated fervently, “Let’s work together!”

Just two years later, the United States Embassy to the Holy See was established, which formalized our diplomatic relationship.  As President Reagan said, this partnership between the U.S. and the Holy See “would exist to the benefit of peace-loving people, everywhere.”

President Reagan was right.  Together, the United States and the Holy See forged one of the most consequential diplomatic relationships in history that, through the leadership of President Reagan and Pope John Paul II, ultimately consigned the Soviet Union to the “ash-heap of history” on December 25, 1991.

Although Russia has changed since the days of the USSR, Vladimir Putin’s objectives remain similar to the Soviet dictators who came before him.  Based on Putin’s remarks, it is clear he aims to reestablish the former Soviet Union.

As we look to the past for insight into the challenges we face today, we must remember one of the most important lessons from history: dictators fear freedom and faith because they threaten their authority and control.

The outpouring of support for Pope John Paul II in 1979 was a referendum on the Soviet Regime that reignited the spirit of the Polish people and eventually led to the defeat of communism in Poland and eastern Europe.

In this decisive moment, the United States must recognize the severity of the threat from Putin’s Russia.  Looking to the example set by President Reagan and Pope John Paul II, we must respond courageously, swiftly, and decisively as this international crisis unfolds.

Like President Reagan and Pope John Paul II, the United States, our allies, and partners must remain committed to freedom and stand in support of the Ukrainian people.