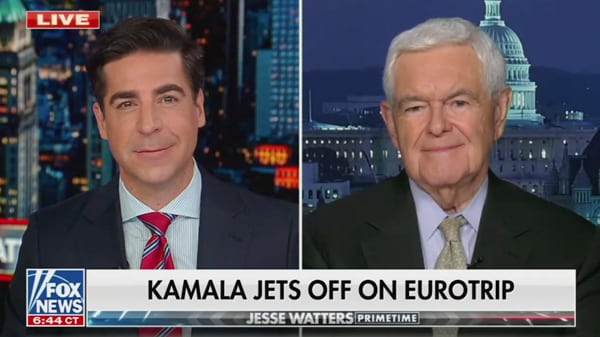 I don’t know if you would feel insulted. I think you would regard it as one more example of the absolutely lack of seriousness in the Biden administration. I mean, she obviously doesn’t know anything and, what she believes doesn’t work. But then Biden currently is basically to lunch, too. So, I mean, if I were European, I would almost be in despair about the lack of American leadership. What you opened the show tonight which was devastating was an attack on a children’s hospital which is a war crime. What we watched all through the show when you started talking about what’s been happening with Chernobyl and the attacks on nuclear reactors, those are war crimes. What we just talked about with the Wagner group, which is targeting for assassination, that’s a war crime. So, let’s be clear. On the one side you have Putin, who should be tried as a war criminal, and we should be very clear that there are no futures in which Putin survives as the head of Russia. On the other side you have a group of people who are so shallow, so lacking in any sense of history, so trivial in their approach. I mean, the American people can’t afford to buy gasoline and the answer is we’re going to have electric buses. Now, an administration, you know, Marie Antoinette once said let them eat bread and Buttigieg basically said let them ride in electric buses. This is madness. And I think we don’t realize how bad this is and how bad it’s going to get. The price of wheat is going up faster than the price of oil. Millions of people are going to be starving because of this war. The Turkish economy is being shattered by what Russia is doing in the black sea. The fact is that there are ships all around the world making the logistic supply chain worse because they can’t land. Now, all these things are going on simultaneously and our answer is Kamala Harris? I mean, we were once a serious country. We were a country that defeated the soviet empire. We were a country that defeated Nazi Germany and imperial Japan. Now we have two people who are totally hopeless as president and vice president surrounded by a cabinet that may be even worse, and we are dealing with a man who is a ruthless war criminal prepared to push his luck and potentially shatter the entire world order if that’s what it takes for his ego and his plans.