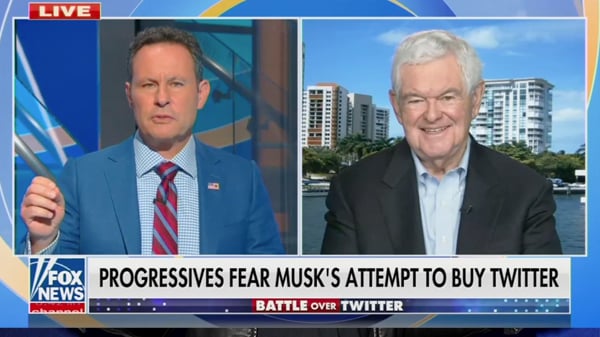 Well, I hope he is going to be a very determined. He has been remarkable whether it is with the Tesla or with battery factories or with SpaceX. He is consistently bought big fought long and pulled it off. My hope is that he’s going to go after these guys. If you are on the hard left, you don’t want freedom of speech. You want freedom of your speech and nobody else. You’ve got a little bit of this yesterday when we had a congresswoman objecting the people singing Christian songs on Easter. This whole notion of I get to define what your free speech is. I think that Musk represents a danger because he doesn’t follow the rules. He is a real genuine libertarian.

I think we have to understand how corrupt the system has become. We have a bunch of people who protect each other, who invest in each other. You have a handful of very wealthy investors who control dozens and dozens of boards. A large part of the movement of the big board’s towards woke left-wing policies has been a function of this handful of investors who have picked their people to serve on these boards. Musk would be a genuine threat not just a Twitter, but he would be a threat to the Facebook. He would be a threat to Google. Because he would open up and allow people to freely be involved in a dialogue. And he would attract I think a huge audience almost overnight. Again, every time he is made up play like this, it is turned out he won regular and made even more money and did even better. I guess in the end is that he will fight his way through, and he will end up owning Twitter and he will make it a very interesting dynamic place which the left will hate. They don’t want interesting dynamic. They want people robotically repeating what they are told to say.

You have a victory here of ideological nuttiness over the profit. Look at Disney. Disney has adopted a policy which I think 68% of the country disapproves of. They are at real risk of costing their stockholders billions of dollars, but they don’t care. Because, you know, they all went to places like Princeton and Stanford and Yale and learned left-wing ideology. And so they think they are doing the right thing even if it bankrupts them.