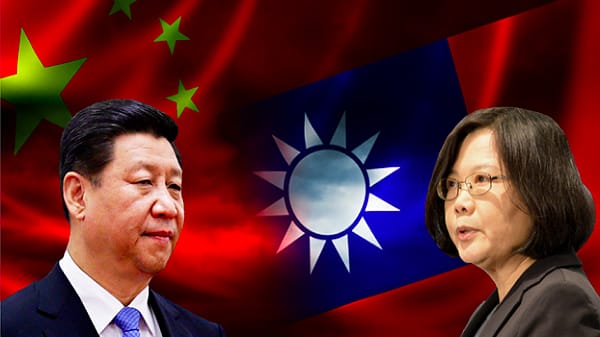 As Russia’s War on Ukraine continues and President Vladimir Putin’s ruthless military campaign shows no sign of stopping, many around the world are now turning their attention to Communist China and asking: Will Taiwan be next?

Usurping control over the island of Taiwan is central to General Secretary Xi Jinping’s ambitions to make Communist China the world’s dominant superpower by 2049. The Chinese Communist Party aims to “reunify” Taiwan with the mainland as part of its goal to realize the “rejuvenation of the Chinese nation.” Notably, the CCP has not ruled out the use of force to bring Taiwan under its control.

Observers have suggested that the Biden administration’s failed withdrawal from Afghanistan empowered Xi, with the Global Times, a CCP-mouthpiece, writing, “It [America] cannot win a war anymore.” Others have looked at Putin’s early failures in Ukraine that were met with bravery and resistance by the Ukrainian people and concluded that Xi may be having second thoughts.

However, as Wang Dan, a student leader from the period of the Tiananmen Square protests and massacre, wrote, “We should not expect rational decision-making from dictators and totalitarian regimes.”

Should Taiwan come under the Chinese Communist Party’s control, it can be expected that the freedom, human rights, and autonomy currently experienced by more than 23 million people will be eliminated.

However, maintaining freedom and democracy in Taiwan is strategically important to the United States.

Communist China views Taiwan as a breakaway province that will inevitably be reunited with the mainland. The U.S., however, has adopted the One China policy, which recognizes the Government of the People’s Republic of China as the sole legal government of China and acknowledges China’s position that Taiwan is a part of China. However, the U.S. position on Taiwanese sovereignty is that it is an unsettled issue that must be resolved peacefully and mutually between Taiwan and the mainland. The Biden administration has even signaled it would defend Taiwan if China tried to take over by force.

The U.S. has an unofficial relationship with Taiwan, so the Taiwan Relations Act provides the framework for this relationship and reinforces the U.S. commitment to assisting with its defense capabilities.

Taiwan is a flourishing and dynamic success story of freedom and democracy. The 2021 Freedom in the World Report gives Taiwan a rating of 94 out of 100 for the degree of political rights and civil liberties enjoyed by the island’s population. Additionally, the Heritage Foundation’s 2022 Index of Economic Freedom ranks Taiwan as the world’s sixth most free economy.

As former Secretary of State Mike Pompeo wrote after visiting Taiwan, the Chinese Communist Party recognizes that “a democratic Chinese nation represents a clear contradiction to its own avowed supremacy. … And every day Taiwan exists as a free and independent nation, that clear contradiction to their assertion of power grows stronger.”

Furthermore, Taiwan is an essential partner for the U.S. – particularly for its supply of semiconductors. Taiwan Semiconductor Manufacturing Company Ltd. (TSMC) produces more than 90 percent of the world’s most advanced chips. Although the U.S. has prioritized onshoring manufacturing, it will take years for U.S. capacity and production capabilities to catch up. Meanwhile, the United States remains dependent on Taiwan for necessary components that are used in electronics ranging from smartphones to the F-35 fighter jet.

Taiwan is the largest landmass between Japan and the Philippines and is essential for Communist China to project power into the South and East China seas. Asserting power in the region is clearly a focus of the CCP’s efforts as it builds and militarizes artificial islands, augments its naval capabilities, and antagonizes sovereign nations.

Notably, nearly one-third of global shipping passes through the South China Sea, a significant portion of which is crude oil and liquefied natural gas. The eruption of a conflict in this region would have a devastating economic impact for America, and for our partners and allies.

The relationship between the United States and Taiwan is critical. American policymakers should not focus on what General Secretary Xi Jinping might do, but rather what America must do to ensure that Taiwan remains a shining beacon of freedom and democracy for the world.