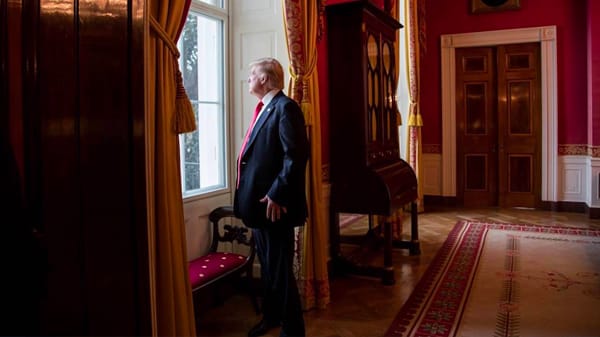 Imagine how much more President Donald Trump and his team could have accomplished if they had not had to spend so much of their time and energy preparing for depositions and defending themselves against lies and false charges.

What would the Donald Trump presidency have been like without the deliberate and virtually treasonous lies about a Trump-Russian connection?

How would President Trump and his team have evolved if they had not been under constant attack by the Democrats, the FBI, the Special Counsel, and the left-wing news media? We now know all the attacks were based on a huge lie which implied substantial Russian influence where none existed.

How would middle-of-the-road Americans have responded to President Trump and his new administration if he had not been subjected to a constant bombardment of hostile, false, vicious, dishonest, and in some cases scurrilous attacks?

How much extra energy would President Trump and his team have had to focus on solving problems if they had not had to spend hours every day fighting off and defending against methodically constant attacks based on falsehoods?

It is amazing how much President Trump accomplished despite the daily war against his survival, character, and team. Just think about Trump-level gasoline and diesel prices, Trump-level energy independence, Trump-level control of the border and defense from cartels and drugs, Trump-level economic growth without inflation, Trump-level surgical application of power to eliminate Qasem Soleimani and Abu Bakr al-Baghdadi – while crushing ISIS in the Syria-Iraq region and managing the war in Afghanistan so no American was killed in combat after February 2020 for the rest of his term.

Imagine how much more he and his team could have accomplished if they had not had to spend so much of their time and energy preparing for depositions and defending themselves against lies and false charges.

The trial of Michael Sussman makes clear that there was an alternative path to a far more acceptable and positive Trump presidency. It is an alternative worth pursuing just to understand how much Hillary Clinton’s vicious dishonesty – and the establishment’s eager embrace of that dishonesty – have cost America.

The Sussman trial is making clear that the entire Russian hoax story was a lie fabricated by the Clinton campaign – and reinforced by Democrats in the FBI, the dishonesty of key congressional Democrats, and the eagerness of the New York Times and Washington Post to destroy President Trump (even if it involved printing and then exaggerating lies tying Trump to Russia).

The establishment’s Pulitzer Prize Committee even awarded prizes to the two newspapers for what we now know was totally dishonest anti-Trump reporting. After this trial, it will be a test of the Pulitzer’s integrity to see if those prizes are withdrawn.

As Jonathan Turley wrote in The Hill on May 21:

“For Democrats and many in the media, Hillary Clinton has long held a Voldemort-like status as ‘she who must not be named’ in scandals. Yet, there was her former campaign manager, Robby Mook, telling a jury that Clinton personally approved a plan to spread the claim of covert communications between the Trump organization and the Russian bank. It was one of the most successful disinformation campaigns in American politics, and Mook implicated Clinton as green-lighting the gas-lighting of the electorate.”

“On July 28, 2016, then-CIA Director John Brennan briefed President Obama on Hillary Clinton’s alleged plan to tie Donald Trump to Russia as ‘a means of distracting the public from her use of a private email server.’ Obama reportedly was told how Clinton allegedly approved ‘a proposal from one of her foreign policy advisers to vilify Donald Trump by stirring up a scandal claiming interference by the Russian security service.’”

Finally, the vicious dishonesty of the entire project is outlined by Turley as:

“For her part, Clinton not only approved using the Alpha Bank claim but helped to portray it as an established fact, tweeting: ‘Computer scientists have apparently uncovered a covert server linking the Trump Organization to a Russian-based bank.’

“That claim was then further amplified by one of her campaign advisers, Jake Sullivan, who now serves as President [Joe] Biden’s national security adviser. Sullivan declared at the time: ‘This could be the most direct link yet between Donald Trump and Moscow. Computer scientists have uncovered a covert server linking the Trump Organization to a Russian-based bank.’ Sullivan added that he could ‘only assume federal authorities will now explore this direct connection between Trump and Russia as part of their existing probe into Russia’s meddling in our elections.’”

This means the current national security adviser to President Biden was deliberately lying about President Trump and Russia. Everyone who deals with Sullivan should remember his dishonesty and treacherous assertion of Russian involvement – that he knew was totally false and being made up by his own campaign.

This incident is further proof of the depth of Democrat dishonesty in the last few years about President Trump, Hunter Biden, the economy, the failure to control the border – the list goes on.

Somewhere there must be some Democrats willing to demand accountability and defend America against this kind of vicious dishonesty and manipulation.