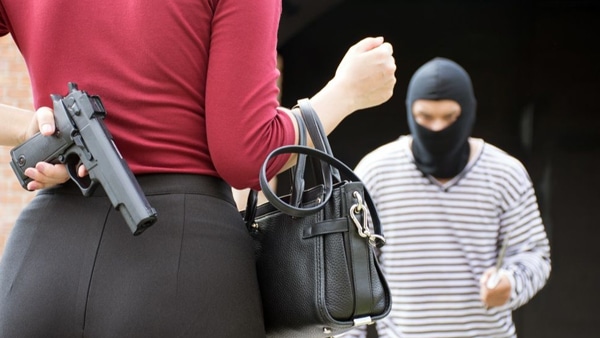 Several years ago, I was driving home to my small town in the North Carolina mountains after speaking at a conference.

My town is like something out of Andy Griffith’s Mayberry. There are plenty of nice neighbors, a beautiful nearby park for walking the dog, the ubiquitous Starbucks but still a few old-style coffee shops for the locals. I grew up just outside of New York City and landing in this place was a dream come true. There’s a small college nearby where I’ve been a professor for 30 years. It’s safe, secure, the way life in America should be.

With that type of thinking imprinted into my DNA, I was driving home late on a summer night and pulled into a gas station at around midnight just outside of Charlotte, NC. I didn’t give a second thought to security of any kind as I got out of my car and started to fill it up. That sense of security I lived with as second nature for years came to a screeching halt a few second later.

A car skidded to a stop next to me and a guy in his 20s got out. Taking a few steps around the pump he instantly demanded, “hey man, I need gas to get home, could you give me a $20.”

It was one of those moments where you are not sure how to react. For most of us that bred in reaction is “this can’t be real,” but at the same instant you know there is a threat. It was the way he stood there, wiry but radiating a strength and a challenge. It was a tension that said danger.

I fumbled for an answer, not sure if there really was a threat or just my over reacting. I finally got out something like, “I only got a credit card, no cash” for an excuse. It was then that he started to get closer, his request now a demand of “hey motherf*****r, I need some f*****g money now!”

There was a final split second of “this can’t be real,” but then an instinct at last clicked in. I was holding the gas nozzle – a weapon.

I pulled the nozzle out and pointed it straight at him and told him in equally obscene language to back off. There was a frozen moment. I saw him look at the nozzle, he barked out more obscenities and backed into his car but left his car door open, still watching me intently. He sat there in the shadows, No one else was at the gas station but him and me, and I knew the moment I hung up the gas nozzle, he’d have me.

My gun. I did have a gun in the car. I have a license to carry concealed, but it had been ages since I actually thought to take that gun out of my glove compartment.

The unlocked passenger door of my small sports car was just a few feet away. Keeping eye contact with him I edged over while still holding the nozzle, opened the door, fumbled for the glove compartment and a few seconds later I had the gun, a small .380 Ruger. I pulled it out, then held it up where he could plainly see it saying, “Leave me alone, I’m armed.”

The gun was greeted with some more loud obscenities, his door slammed, and he peeled away.

I didn’t bother to finish gassing up, I just hung the nozzle up, got into the driver’s seat, gun in hand, and sat there shaking. It had all happened in 30 seconds.  I had just lived through what I’ll called a “UGI” an Unreported Gun Incident.

Shaken, I did wonder if I should call the cops. But then what do I tell them? “Hey, this guy was threatening me, I got out my gun and he drove off.”

Yeah, right. Tell the cops I used a gun to scare off an unidentified mugger? If this had happened in places such as Chicago, Philly, or where I grew up, I’d be arrested for pulling a gun in the first place.

So, I locked myself into the car, kept the gun on the passenger seat, and drove home.

I told some friends about it and heard how more than one had similar incidents. A buddy scared off a couple of thieves set on robbing him. Another friend was confronted with road rage going out-of-control until he pulled out a gun and the guy sped off.  Both cases were never reported.

Events of recent months renewed my interest in this question, such as the law-abiding armed citizen in Indiana who stopped a mass shooter within the first 30 seconds of a rampage and saved countless lives. But are there any statistics out there for an UGI a “Unreported Gun Incident.”

Apparently the first reliable study dates to 1993, when Florida state criminologists Gary Kleck and Marc Gertz did a comprehensive study and concluded that there are more than 2 million (yes 2 million!) unreported cases a year in which a gun is used defensively, never fired, and the criminal flees.

If the defendants did not have guns, how many robberies, muggings, assaults, and even rapes and murders would have occurred? We will never really know, but it is a pretty sure bet the numbers would be high.

Put yourself in the shoes of the defendant. You call the cops, but to what purpose if in the adrenal rush of the moment you can barely identify the perpetrator or recall a license plate number? And as said earlier, in more than a few places, especially high crime cities, if you call it in, you are the one hassled and/or even arrested after stating “yeah, I pulled a gun and that ended it.” You are the one who winds up in jail.

Statistic from several studies show the incident rate for a UGI goes from a few hundred thousand to 2 million incidents a year. How does the radical anti-gun lobby answer this while chanting their mantra to “take all guns away.”

As for my case, would I have become a statistic. that night outside of Charlotte if I had been defenseless?

William R. Forstchen, Ph.D., is a professor of history at Montreat College. He is the author of more than 50 books, including the NYT best seller “One Second After” and recently penned an article for the Washington Times on arming teachers to secure schools.