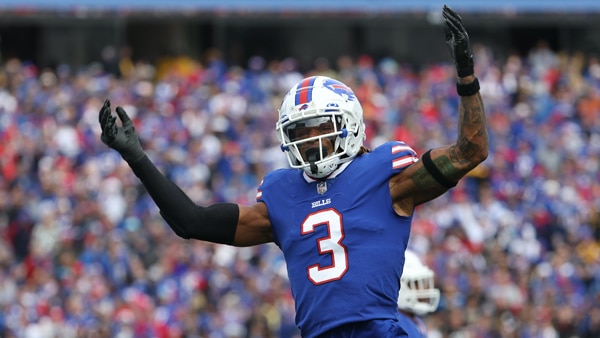 On Monday, January 2, two formidable NFL teams – the Buffalo Bills and the Cincinnati Bengals – took the field. Thousands of fans cheered for their teams in the stands until tragedy struck in the first quarter, when Bills safety Damar Hamlin suffered a cardiac arrest and collapsed on the field.

While Hamlin received treatment from the doctors and specialists at the University of Cincinnati Medical Center, he continued to receive an outpouring of prayer, love, and support from Americans across the country.

On the night of Monday, January 2, Bills and Bengals fans linked arms in prayer and held a candlelight vigil outside of the hospital where Hamlin was being treated. Clips circulated online of Bengal’s fans reciting the Lord’s Prayer and all 32 NFL teams changed their Twitter profile photo to an image that read “Pray for Damar.”

And, during an NFL Live broadcast, ESPN analyst Dan Orlovsky interrupted the program to say, “I heard the Buffalo Bills organization say that we believe in prayer, and maybe this is not the right thing to do, but it’s just on my heart, and I want to pray for Damar Hamlin right now.”

Thankfully, Hamlin significantly improved throughout the week. He was transported to Buffalo General Medical Center/Gates Vascular Institute to continue his treatment and on Wednesday, was discharged.

In the aftermath of the tragedy, head coach Sean McDermott gave glory and praise to God for His guidance both on and off the field. “I hope this is a great example and reminder to people,” McDermott said, “of the power of prayer and the power of love.”

Coach McDermott is exactly right – prayer is powerful. Throughout our nation’s history, the power of prayer has been evident as America’s leaders turned to God in times of thanksgiving and turmoil.

In President George Washington’s first inaugural address, he attributed America’s victory in the Revolutionary War over the most powerful empire in the world to divine providence.

When President Abraham Lincoln issued the Emancipation Proclamation at the height of the Civil War, he evoked the “gracious favor of Almighty God.”

And during World War II, as Allied troops stormed the beaches of Normandy, President Franklin Delano Roosevelt asked the American people to join him in prayer.

However, amidst a wave of secularization across America, it takes courage to publicly proclaim one’s faith in God.

A recent study found that 33 percent of Americans never attend religious services – up from 25 percent before the pandemic. Within the last year, we’ve seen churches and synagogues attacked, a high school football coach defend his right to pray during school events in front of the U.S. Supreme Court, and an incoming U.S. Congressman pledge to swear his oath of office on a Superman comic book.

America was born based on the assertion that our rights come from God. But there have been times when, as a nation, we have ignored the truth proclaimed by our Founding Fathers in the Declaration of Independence 246 years ago – that all men are created equal and endowed by their Creator with certain unalienable rights.

In his proclamation Appointing a Day of National Humiliation, Fasting, and Prayer, President Abraham Lincoln said on March 30, 1863, during the deadliest conflict in American history, “We have forgotten God…We have vainly imagined, in the deceitfulness of our hearts, that all these blessings were produced by some superior wisdom and virtue of our own. Intoxicated with unbroken success, we have become…too proud to pray to the God that made us!”

It is therefore clear that removing God from the equation is a dangerous feat that leads to devastation and the collapse of freedom.

However, as we witness faith in action as Americans unite in prayer for Damar Hamlin, we are reminded that it is our shared, fundamental belief that our freedoms come from God that forms who we are as a people and a nation. It is this belief in God that has sustained our country through times of prosperity and turmoil.

These past two weeks have humbled and united sports fans and others as they put their trust in God for Damar Hamlin’s recovery and healing. As Hamlin tweeted from his hospital bed, “Nothing I want more than to be running out [of] that tunnel with my brothers. God [is] using me in a different way today.”

The outpouring of faith, love, and support in the aftermath of Damar Hamlin’s tragedy is a testament to the grace of God and the power of prayer.